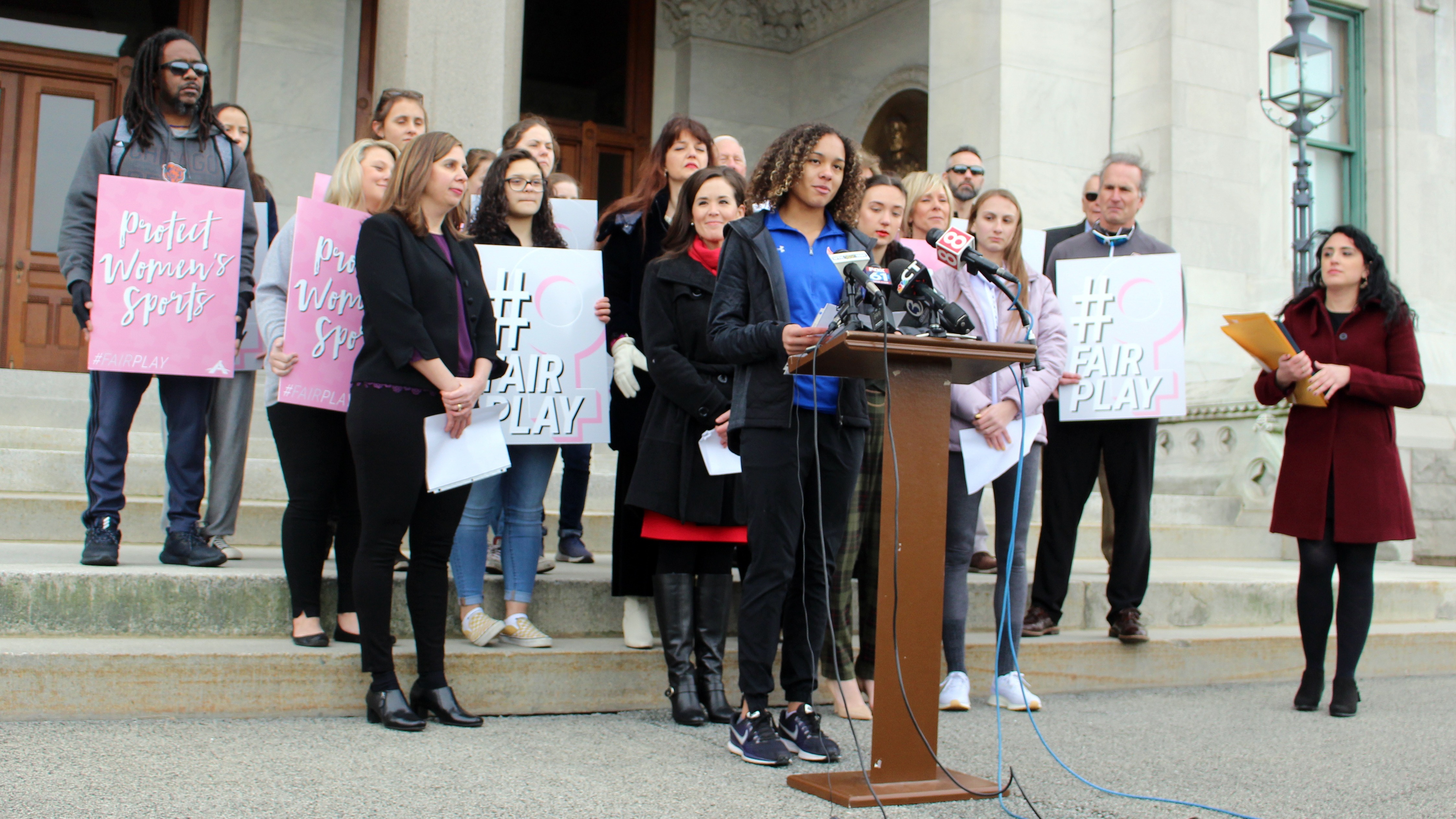 There was an impassioned debate in the South Dakota State Senate this week over a proposed bill that would restrict transgender female students from participating in female sports.

Legislators supporting the bill framed their arguments around fairness.

A Democratic opponent of the bill responded by talking about Christian values of love and inclusion.​

“Jesus says, ‘Rejoice with me, for I have found my sheep that was lost,’ so meaning that there is no rejoicing until all have found a place in the flock, including our trans siblings of faith,” said Democratic state Sen. Reynold Nesiba, reading from a letter from a Lutheran bishop.

The bill’s proponents were ultimately successful; South Dakota has passed its bill, and Republican Gov. Kristi Noem has tweeted that she is “excited” to sign it.

This bill is just one small part of a bigger national dispute over transgender rights. This year, state legislators have introduced 35 bills restricting transgender girls and women — that is, girls and women who were not assigned as female at birth — from playing on girls’ and women’s sports teams, according to LGBTQ advocacy group Freedom for All Americans. That’s up from 29 bills last year and only 2 in 2019.

Mississippi has also passed a bill restricting transgender girls’ sports participation, and that state’s governor has indicated he would sign it.

It’s a fight that’s much bigger than state-level legislation. President Biden in January signed an executive order aimed at protecting LGBTQ rights. That order stated, “Children should be able to learn without worrying about whether they will be denied access to the restroom, the locker room, or school sports.” Democrats have also reintroduced the Equality Act, which would enshrine LGBTQ rights into law.

The topic has taken on far greater importance in Republican rhetoric, as well. Former President Donald Trump brought up the topic at CPAC last month.​

“Young girls and women are incensed that they are now being forced to compete with biological males,” he said. “It’s not good for women’s sports, which worked so long and so hard to get to where they are.” 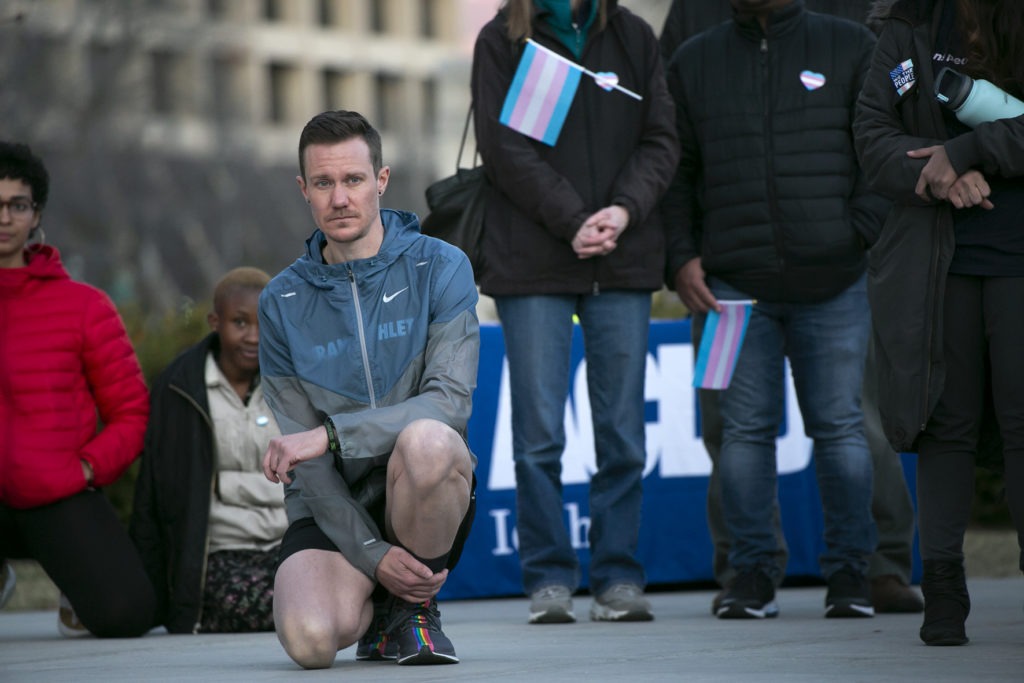 Chris Mosier, a Team USA athlete and transgender activist, kneels as he listens to speakers at a rally at the Idaho Statehouse on Tuesday, March 3, 2020, against Idaho’s HB500 banning transgender athletes from participating in women’s sports. CREDIT: Idaho Education News

The bills are a newer front in a fight over LGBTQ rights, where the focus has shifted over time. For example, in 2016 and 2017, there was an uptick in bills that aimed to dictate which bathrooms transgender people could use. Now the focus is on sports, as well as medical treatment for transgender youth, while the number of so-called “bathroom bills” has fallen off.

Jason Pierceson, political science professor at the University of Illinois Springfield and expert on gender and sexuality in politics, sees these bills as just the latest battle in a political culture war waged by the right.

“What they do is typically say, with the bathroom issue five or six years ago or with the transgender youth issue these days, they try to find something that doesn’t seem to poll as well as general anti-discrimination protections,” he said. “And they use a lot of scare tactics around that issue to distort the issue perhaps, to try to create a lot of anxiety among religious conservatives.

What happens when the bills go into effect?

The question remains what practical impact transgender sports bills would have.

“They are suggesting a solution for a problem that simply does not exist in terms of the numbers of transgender youth who are participating in sports,” said Kyle Velte, a professor of law at the University of Kansas. She testified against that state’s bill.​

A recent AP report found that overwhelmingly, sponsors of these bills couldn’t cite examples in their own states where this became a fairness issue. Some pointed to a lawsuit filed in Connecticut aimed to limit transgender participation in that state.

Proponents maintain that the bills will prove to be useful.

“I think the ultimate outcome will be to protect women and girls’ equal opportunities,” said Emilie Kao, an attorney at the conservative Heritage Foundation.. “I think eventually these cases, the examples will proliferate.”

There are also questions about the legal future of these bills. The first state transgender sports law, passed in Idaho last year, was later blocked by a federal judge who argued, in part, that the state had “not identified a legitimate interest served by the Act.”

The Supreme Court decision in Bostock v. Clayton County last year, that discrimination based on gender identity or sexual orientation qualifies as sex discrimination, also greatly strengthens potential legal cases against these laws once they’re passed, according to Velte.

Legal arguments aside, she also fears these bills further marginalize transgender youth, whom research has shown are at elevated risk for suicide.

Joanna Harper is a leading authority on gender in sports, author of the book Sporting Gender, and a transgender athlete herself.

She explained that considering the roles of gender and sex in sports is phenomenally complicated, not just because of the science, but because of the importance of inclusion and the role of sports in students’ lives. For many students, she said, sports are not about state championships or athletic scholarships, but simply about competing alongside their friends. For more competitive athletes, she added, there’s room for nuance, but in her opinion there are no simple answers.

“At the upper levels, it’s reasonable to hope to put restrictions. Now, restrictions are not the same thing as bans. And I can’t imagine in high school sports that it would ever be unreasonable not to let high school trans girls into girls’ sports after they’ve been through a year of hormone therapy,” she said. “And in many cases, it’s probably not even necessary to do that, but in some cases, it certainly is.”

“And if all that sounds complex, well, it is,” she added.

The upshot is that talking about the topic of inclusion in sports can be deeply sensitive and nuanced, in a way that conversations about limiting transgender girls’ participation in sports often are not.

An appeal to swing voters

Backers of these bills say they are reacting to Democratic overreach, pointing to things like Biden’s executive order and the Equality Act. And they say key voters may be receptive to that argument. Charles Moran, managing director of the Log Cabin Republicans, pointed to a group the GOP struggled with in 2020: suburban women.​

“LGBT issues are something that they care about,” he said. “But at the same time, when presented with this issue that we’re dealing with here, with transgender sports, some of them will be the first ones to stand up and say, ‘No, this is wrong. My daughter shouldn’t be having to compete against a person in the same league who’s M to F.'”

Polling has shown that Americans’ opinions on transgender rights differ based on the specific topic being discussed. 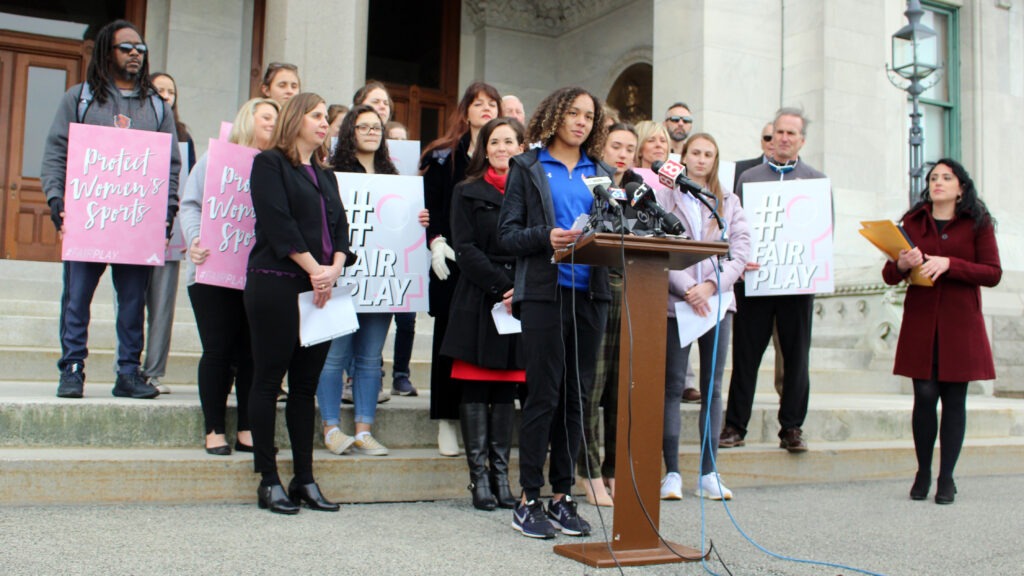 For example, a 2019 poll from the Public Religion Research Institute showed that a solid majority of Americans (62%) said they had grown more supportive of transgender rights as a whole over the prior five years. And 7 in 10 Americans told Gallup that year that they support transgender people openly serving in the military.

However, Americans were more evenly split on which bathrooms they believed transgender people should use. 2018 polling from PRRI likewise showed Americans only slightly in favor of transgender girls playing sports with other girls.

Less than 1% of U.S. adults identify as transgender, according to Gallup. That makes transgender rights a new topic to many Americans, said Robert Jones, CEO and founder of PRRI.

“We’re still at a place in the country where a majority of Americans don’t know someone personally who’s transgender,” he said. “And so I think that means that some of these issues, until they become politicized, aren’t things that the public has spent a great deal of time thinking about. That means that the issue is more malleable, I think, when it’s a low-information or low-salience issue.”

If that’s true, it heightens the importance of the current debates over transgender bathroom usage, medical treatment and sports participation. As these issues become politicized across the country, it could at least temporarily solidify many Americans’ opinions.