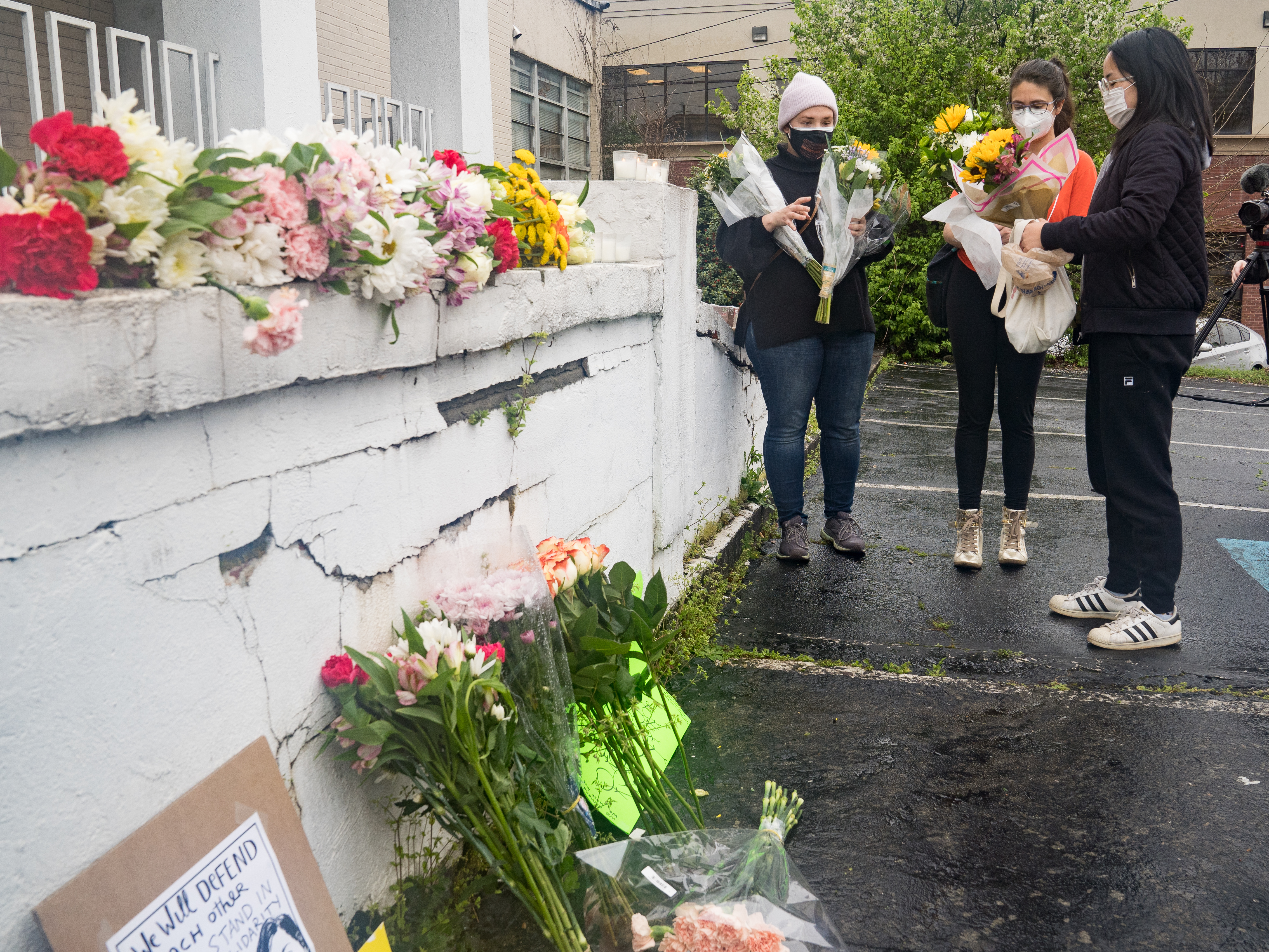 The suspected gunman in three attacks that killed eight people at Atlanta-area spas on Tuesday has been charged with eight counts of murder and one count of aggravated assault.

Cherokee County officials announced on Wednesday afternoon that Robert Aaron Long, 21, has been charged with four counts of murder and one count of assault in the shooting involving three women and two men at Young’s Asian Massage. He has also been charged with murder in Atlanta, where four other women were killed in two separate attacks.

Police said the suspect has confessed to the crime and told officials about a “temptation for him that he wanted to eliminate.” They said it is too early to determine if he’ll be charged with a hate crime.

Six women of Asian descent are among the dead, raising suspicions of a hate crime. Long claims race did not play a role in his decision to target the businesses, police said, relaying details from questioning the gunman.

Long is believed to have “frequented these places, and he may have been lashing out,” Cherokee County Sheriff Frank Reynolds said, after noting that the suspect indicated to investigators that he has a sexual addiction.

Long was arrested within hours of the attacks on the three spas, after police tracked his vehicle on the interstate in south Georgia. He is being held without bond.

As of early Wednesday afternoon, only half of the victims had been publicly identified.

The sheriff’s office in Cherokee County identified the people who were killed there as:

In addition, Elcias R. Hernandez-Ortiz, 30, of Acworth was injured, the sheriff’s office says. His condition has been listed as stable.

Police in Atlanta say they’re not yet publicly naming the victims from the two shootings in that city; a representative says the department is still working to identify them.

The shootings at the three spas took place against a backdrop of discrimination and violence against Asian Americans that has increased sharply in the past year.

Responding to questions of whether the shootings might be a hate crime, Atlanta Police Chief Rodney Bryant said, “We are still early in this investigation, so we cannot make that determination at this moment.”

Mourners visit and leave flowers on Wednesday at the site of two shootings at spas across the street from one another in Atlanta.
CREDIT: Megan Varner/Getty Images

“[Long] does claim that it was not racially motivated,” Capt. Jay Baker of the Cherokee County Sheriff’s Office said, while cautioning that it’s still early in the investigation.

“He apparently has an issue, what he considers a sex addiction, and sees these locations … [as] a temptation for him that he wanted to eliminate.”

“This was a tragic day, with many victims,” Atlanta Mayor Keisha Lance Bottoms said. At a late-morning news conference on Wednesday, she said the businesses targeted in Atlanta had not been on the city’s radar as potential sites of crime or trouble.

In a later interview with CNN, Bottoms said that she was aware of the suspect’s claims that the killings were not racially motivated, “but I am taking that with a grain of salt.”

“This is a man who murdered eight people in cold blood. All of the victims in Atlanta were Asian. … It is very difficult to ignore that the Asian community has once again been targeted and it’s happening all over the country.”

The shocking violence could have been worse, Bottoms said, noting that when he was arrested, Long was heading to Florida, where he seemed to be planning to carry out similar violence.

Reynolds said his county is mostly a bedroom community and had just one murder in the past year. “We don’t have a lot of crime in that area,” he added.

Long was initially identified through surveillance camera footage from one of the crime scenes, the sheriff said. After his agency posted images to social media, Long’s parents got in touch to say they believed it was their son in the pictures.

“They’re very distraught, and they were very helpful in this apprehension,” Reynolds said.

Because of the family’s tip, police were able to track Long’s cellphone, which helped them narrow down his movements after the attacks.

Responses from the Asian American community

The group Stop AAPI Hate says it has received nearly 3,800 reports of what it describes as hate incidents — including verbal harassment and physical assault — since the COVID-19 pandemic began last March. In the aftermath of the Atlanta-area attacks, officials in cities such as New York and Seattle said they would boost law enforcement’s presence in Asian American communities.

On Wednesday, Asian Americans Advancing Justice-Atlanta issued a statement saying that although details are still emerging, the broader context of racial tension in the U.S. cannot be ignored.

“While anti-Asian violence is woven throughout our nation’s history, the Trump administration’s relentless scapegoating of Asians for the ongoing COVID-19 pandemic has increased” those incidents, said the advocacy group, which is an affiliate of a national organization.

“We’re calling on our allies across communities of color to stand with us in grief and solidarity against racist violence in all its forms,” said Stephanie Cho, the Atlanta group’s executive director.

How the attacks unfolded

The first attack targeted Young’s Asian Massage in Acworth in Cherokee County, northwest of Atlanta, where the sheriff’s office said four people died and at least one other person was injured.

“The victims were two Asian women, a white woman and a white man,” according to The Atlanta Journal-Constitution, citing Baker. A fifth victim, a Hispanic man, was taken to the hospital for his injuries.

Surveillance footage from a neighboring business appeared to show Long’s Hyundai Tucson SUV entering the spa’s strip mall parking lot around 4:50 p.m. ET. Long is from Woodstock, Ga., which is in Cherokee County.

The second and third attacks came about one hour later on Piedmont Road in northeast Atlanta. Women who called emergency dispatchers to ask for help at the pair of Atlanta spas urged police to come quickly, according to 911 audio that was released on Wednesday.

The first call came from a woman at Gold Spa who said a man had come in with a gun. The dispatcher asked where the man was.

Officers arrived at the spa less than two minutes after the dispatch call went out, according to police. They found three women dead from gunshot wounds inside.

The second 911 call came in about nine minutes later, from a woman at Aromatherapy Spa, almost directly across the street. Police were dispatched on a report of gunshots fired and arrived two minutes later. When they entered the business, they found that a fourth woman had been killed.

From Atlanta, the suspected gunman fled to the south, as police spread the alarm to be on the lookout for his vehicle. As he drove south on Interstate 75, the authorities set a trap for him.

Around 8 p.m., Crisp County Sheriff Billy Hancock said, his agency got word “that a murder suspect out of north Georgia was getting close to entering our county.”

Some 30 minutes later, Georgia State Patrol troopers performed a maneuver on Long’s SUV that caused it to spin out of control, Hancock said. The suspect was taken into custody without incident and taken to the county jail, he said. Long was later transferred back to Cherokee County.

“A 9 mm firearm was recovered during the traffic stop” of Long’s vehicle, the Cherokee County Sheriff’s Office said.

It is unclear exactly when the alleged murder weapon was purchased, but an employee at Big Woods Goods in Holly Springs told The Atlanta Journal-Constitution that Long bought a gun on Tuesday before the shooting rampage.

The FBI is assisting both Cherokee County and Atlanta police in handling the case, Kevin Rowson, a spokesman for the FBI’s Atlanta office, told NPR.

As of Wednesday afternoon, NPR member station GPB reported, “Long has since been moved to the Cherokee County Adult Detention Center, and has been interviewed by both the Atlanta Police Department and FBI.”

Long is expected to be arraigned Thursday morning.

“Yesterday was a tragic day across our state,” Bottoms said. The mayor added that she has been in touch with the White House about the case and that President Biden offered federal assistance in dealing with the crime.

Biden spoke about the killings on Wednesday, saying he was briefed on a phone call with Attorney General Merrick Garland and FBI Director Christopher Wray.

“Whatever the motivation here, I know that Asian Americans are very concerned,” Biden said in the Oval Office, noting a rise in violence targeting that community within the United States.

“But I am making no connection at this moment to the motivation of the killer,” the president added. “I’m waiting for an answer, as the investigation proceeds, from the FBI and from the Justice Department.”

Georgia Gov. Brian Kemp said he and first lady Marty Kemp “are heartbroken and disgusted by the heinous shootings that took place last night. We continue to pray for the families and loved ones of the victims.”

“These horrific crimes have no place in Georgia,” he added.

Georgia state Rep. Bee Nguyen pulled no punches in characterizing the deadly shootings: “This is the result of xenophobic rhetoric” against Asians in America, especially during the COVID-19 pandemic, she said.