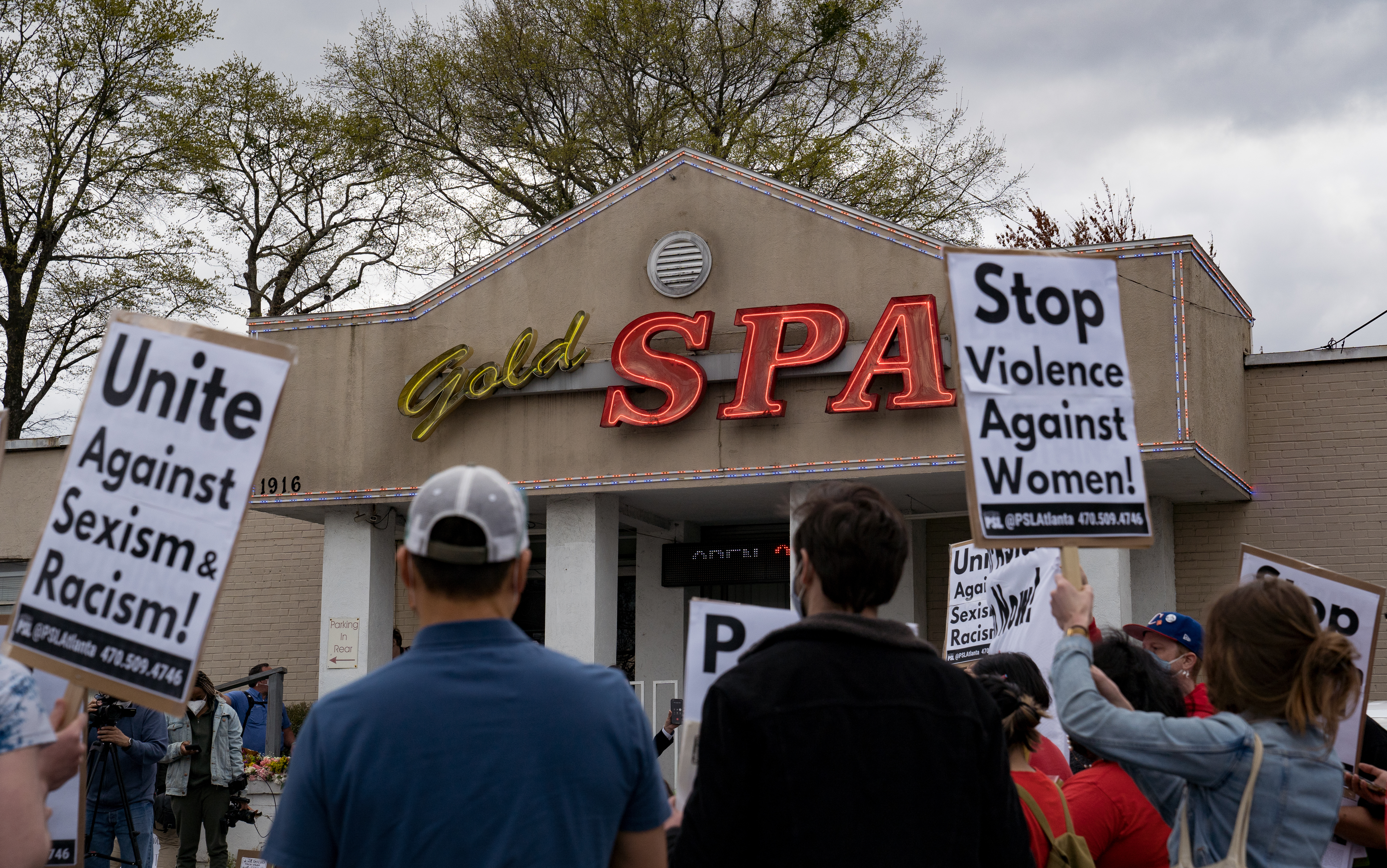 Of the eight victims killed in this week’s shooting rampage on massage spas in the Atlanta area, six were women of Asian descent.

Although authorities have said it’s too early to declare the attack a hate crime, they said the gunman’s actions — relying on the suspect’s own words — were not racially motivated, but driven by a sex addiction. He confessed to officers that in committing the acts he wanted to “eliminate” a “temptation.”

The implication that racism and sexism are two separate motivations has prompted outrage among Asian American women who say the two have always been inseparable in their experience — especially so in the context of the recent surge in anti-Asian attacks.

ALSO SEE: What We Know About The Victims Of The Atlanta-Area Shootings

–Statement From The Anti-Defamation League

–Resources For Challenging Anti-Asian Bias And Being An Ally

Nancy Wang Yuen, a sociology professor at Biola University who specializes in race and ethnicity in media, told NPR that extricating racism from the conversation ignores the history of hypersexualization and fetishization of Asian women in the U.S.

Hearing that authorities were not calling the mass shooting as racially motivated, she says, was enraging.

“I was just so angry, and I just thought these police officers — and maybe all of America — just doesn’t understand how racism and sexism intersect,” Yuen tells NPR’s All Things Considered. 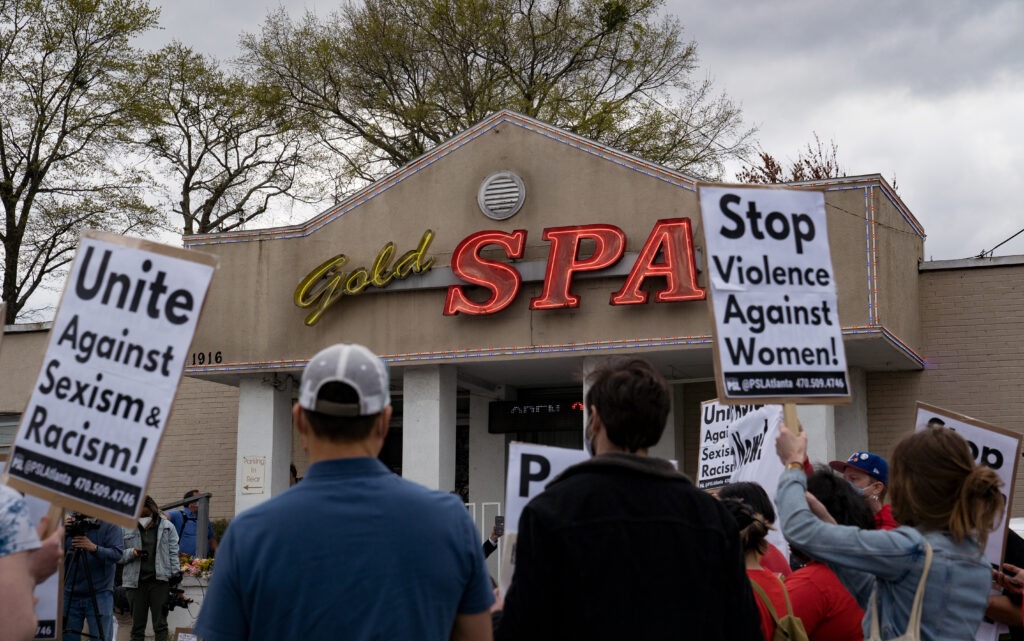 This man, according to law enforcement, said that he committed what he did this week to, “eliminate” his “temptations.” How does that connect to your understanding of the way Asian women have been hypersexualized and fetishized in American society? Can we just take a moment for you and I to say out loud what those sexual stereotypes of Asian women are?

I think submissive. And I’ve actually gotten — this is, you know, really personal, but — I’ve actually been asked if my anatomy is different. So, a kind of very fetishized, exoticized, that we’re somehow even physiologically different from other women. And I think that goes back to a history of fetishization of women of color in this country. And servile. What else …

Yes. And I think, with the lotus blossom, like death at the end of movies — like, they never survive. So it’s the kind of Madame Butterfly, Miss Saigon thing where, you know, you want them, but then you also can’t have them. They’re taboo, they’re forbidden.

Yes — so the prostitute, the Asian prostitute. And that’s a very common stereotype, and the kind of propositions that Asian women get in public all surround Full Metal Jacket quotes. And they’re horrible and everyone knows them, even though the movie is rather old. But it’s now part of society or culture in general, like life imitating art — and imitating kind of an imagined life.

When you heard reports that this perpetrator said that he committed these shootings to “eliminate” his “temptations,” what did that say to you about his motivations?

First of all, I thought that he completely dehumanized these women. He labeled them as temptations to be excised, to be eliminated. I mean, these are human beings, right? He is the one — if he has an addiction, he has the problem. Why treat whatever fetish that he has with Asian women, why treat the women as the problem? I mean, this kind of externalization of his own issues — it was so horrible to hear. And as an Asian woman, it felt totally dehumanizing.

I just want to take a step back here for some context and talk about some of the larger institutions that play a role here and why this happens in American society. Let’s talk first about the U.S. military. How do you think the military figures into this conversation?

So the U.S. military has had many wars with Asia. And and so the kind of, even rhetoric, of thinking of Asia as a place that you want to take over, to dominate. And so there is this kind of fetishization of Asia proper as a country. And then, of course, when the when the GIs are over there, they’re participating in the sex industry. And, as a result, there have been what are called camp towns that pop up around U.S. military bases and those camp towns have sex workers. And so, the GIs, I think, associate, you know, being in Asia with sex workers, even though Asians are not any more likely to be sex workers than any other race or culture.

Exactly. Which only further reinforces attitudes that permission is granted to Asian women’s bodies.

That’s right. So, the kind of easy access and inexpensive access and continual access through those camp towns contributes to the idea that Asian women’s bodies are just for white male pleasure.

I want to talk about with you some of the other ways Asian women have been targeted by specific laws and policies in this country. Let’s talk about the Page Act.

So the Page Act of 1875 actually predates the Chinese Exclusion Act [of 1882], and it was an act that particularly targeted East Asian women. And it was applied mostly to Chinese women. And they thought of Chinese women as all prostitutes, right. It was a way to exclude the Chinese population and they were successful in enacting it against women because they perceived that — or they constructed that — they carried venereal diseases and actually that they were temptations for white men.

I’m just wondering if you feel — even though violence against Asian women has been happening for a very long time — if you feel the conversation is different in this moment, does it feel like it’s more robust now? And, if so, why do you think that is?

I actually think that Black Lives Matter is part of it. That’s because our society is finally having a racial reckoning, that they’re becoming aware that racism exists and now we’re able to nuance race and nuance race intersecting with sexism, that all of this is America coming to a greater understanding of all the layers of bigotry and discrimination that the various groups of color have experienced in this country.

NPR’s Mia Venkat and Courtney Dorning produced and edited this interview for broadcast. Emma Bowman adapted it for the Web.