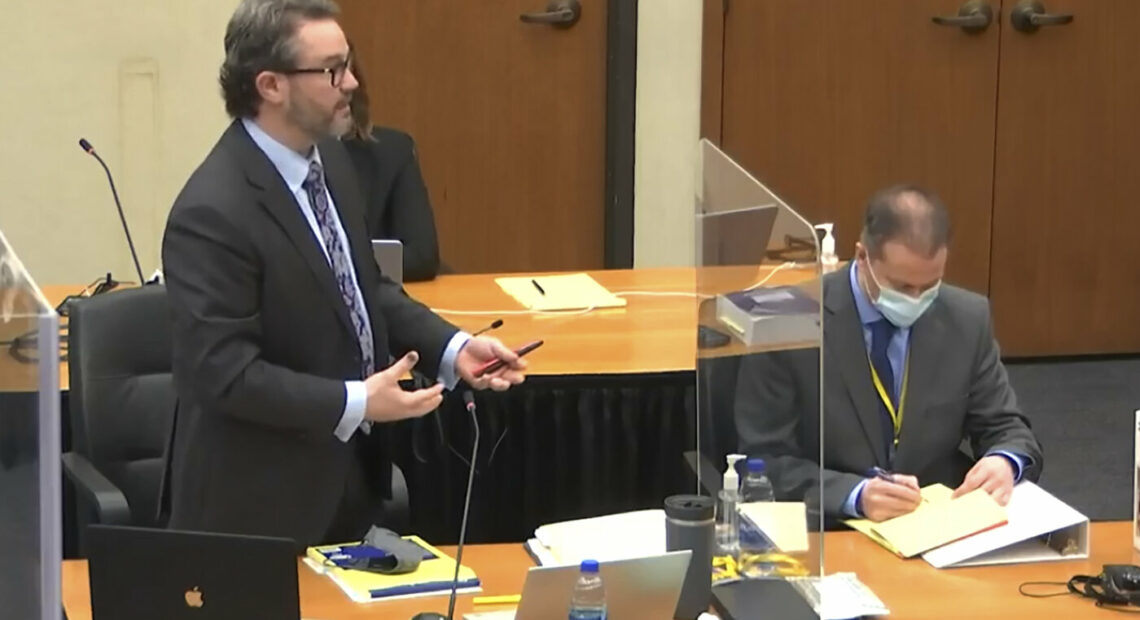 The prosecution and defense made opening arguments in the murder trial of former Minneapolis police officer Derek Chauvin on Monday morning. The trial is starting in earnest 10 months after George Floyd’s killing triggered outrage and protests against racial inequality across the United States.

“Mr. Derek Chauvin betrayed this badge,” Special Assistant Attorney General Jerry Blackwell told the jury after outlining police policies and the oath that Chauvin took when he became an officer. As he spoke, Blackwell showed jurors a photo from the scene in which Chauvin has his knee on Floyd’s neck.

Blackwell told the jurors that they will learn that Floyd’s body was making involuntary movements while he was being held down by Chauvin, including a seizure and “agonal breathing” from oxygen deprivation.

After Chauvin was told twice that Floyd did not have a pulse, “he does not let up, and he does not get up,” Blackwell said, adding that the officer did not move off Floyd even as a paramedic sought a pulse.

Blackwell also noted that Chauvin was fired shortly after the encounter. 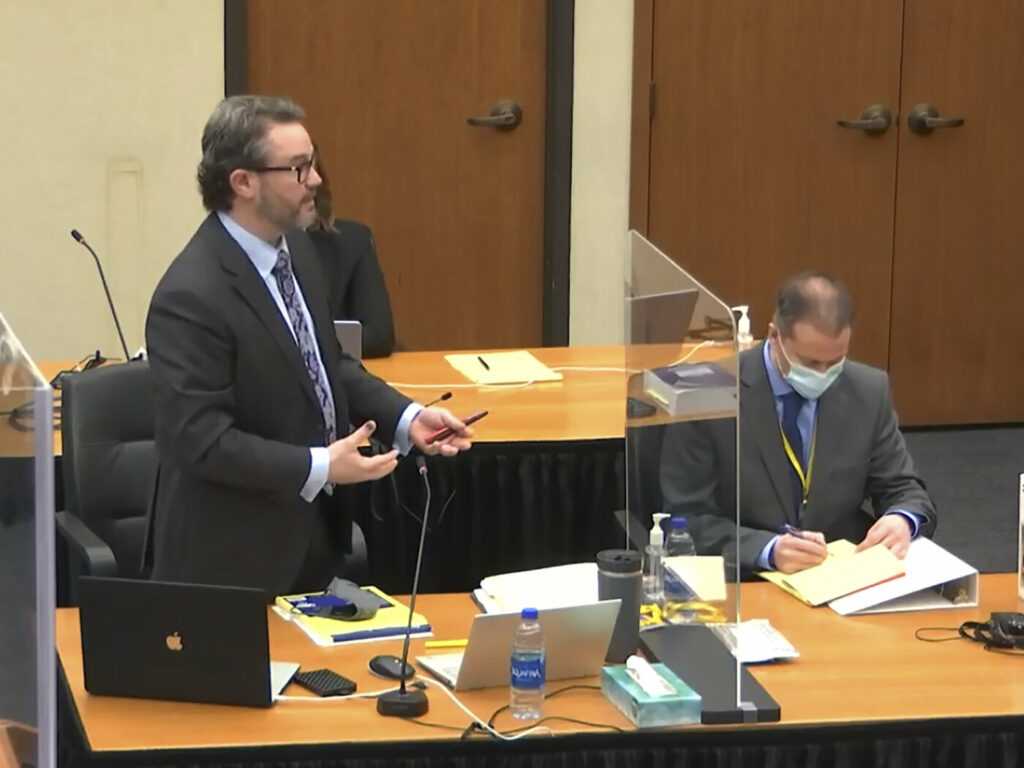 After the prosecution delivered its argument, Chauvin’s defense attorney, Eric Nelson, told jurors that the trial will bring several significant battles over how some facts are interpreted. Chief among them, he said, will be the cause of death.

“The evidence will show that Mr. Floyd died of a cardiac arrhythmia that occurred as a result of hypertension, his coronary disease, the ingestion of methamphetamine and fentanyl, and the adrenaline flowing through his body — all of which acted to further compromise an already compromised heart,” Nelson said.

Describing Floyd’s actions on the day he died, Nelson said, “The evidence will show that when confronted by police, Mr. Floyd put drugs in his mouth in an effort to conceal them from police.”

When jurors weigh the evidence and the law and “apply reason and common sense,” Nelson said, “there will only be one just verdict, and that is to find Mr. Chauvin not guilty.”

Chauvin, who is white, is charged with second-degree unintentional murder, third-degree murder and second-degree manslaughter in the death of Floyd, a Black man. Video recordings show that Floyd was handcuffed and held facedown on the asphalt and that Chauvin kept his knee on Floyd’s neck for nearly nine minutes.

The court will convene at 9 a.m. CT each day for the trial, which is expected to last about four weeks. You can follow the proceedings on NPR and at member station Minnesota Public Radio, which is livestreaming video coverage from the courtroom.

The Hennepin County medical examiner ruled last June that Floyd’s death was a homicide, saying his heart and lungs stopped functioning “while being restrained.”

The autopsy report cited neck compression, but it also noted “other significant conditions,” including fentanyl intoxication, recent methamphetamine use and signs of heart disease.

Several legal questions will likely determine the outcome of the case:

The 12 jurors and two alternates were sworn in shortly after 9:20 a.m. local time. Afterward, Hennepin County Judge Peter Cahill told jurors they can tell only their immediate family that they’re on this case — and he reminded them to avoid any media coverage or attempt to do their own research.

“You are not investigators,” Cahill said.

The highly anticipated trial is being watched closely, as Floyd’s family and their supporters call for justice in what they say was an excessive use of force. Chauvin’s supporters say the officer used force only after Floyd resisted being put in a police car.

To reach the courtroom hosting the trial, jurors and attorneys have to pass through an elaborate set of security measures — including barricades, fencing and concertina wire — that surround the court building.

In recent weeks, Cahill denied defense motions to move the trial outside Minneapolis or to delay the proceedings until publicity about the case eases. 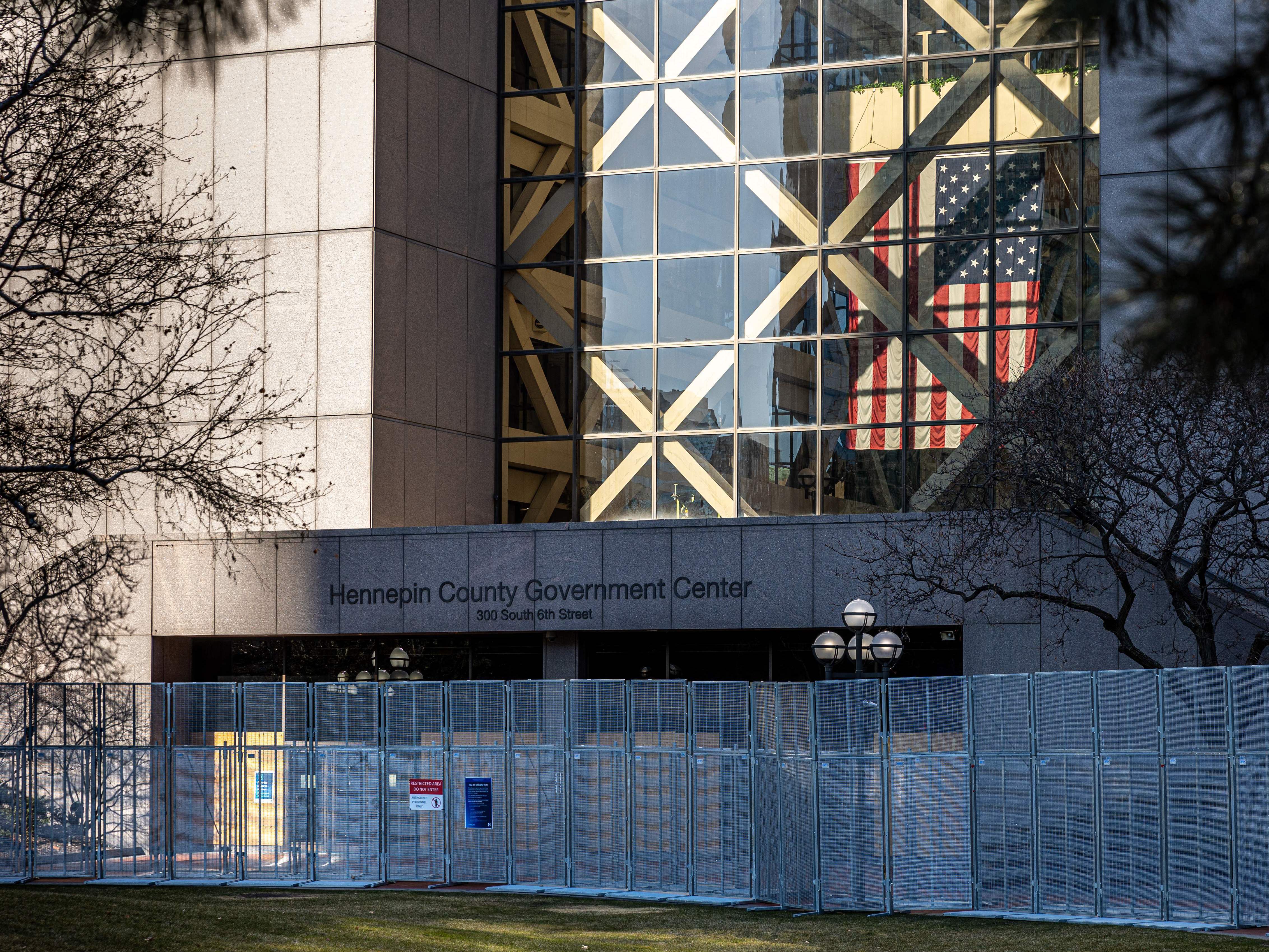 The Hennepin County Government Center is pictured on the third day of jury selection in the trial of former Minneapolis police officer Derek Chauvin on March 11. The prosecution and defense made their opening arguments on Monday morning.
CREDIT: Kerem Yucel/AFP via Getty Images

“I do not think that that would give the defendant any kind of a fair trial beyond what we are doing here today,” Cahill said as he issued his ruling. “I don’t think there’s any place in the state of Minnesota that has not been subjected to extreme amounts of publicity on this case.”

Public awareness of the trial also became a concern after the city of Minneapolis reached a $27 million settlement with Floyd’s family.

After that news broke, two jurors told the court that they could no longer promise to be impartial, and they were struck from the panel. In one juror’s words, the payout made him believe the city was admitting that “something was wrong,” according to Minnesota Public Radio.

The jury includes one Black woman, three Black men (two of whom are immigrants) and two women who identify as multiracial — making the panel more diverse than Minneapolis. The remainder of the jurors and alternates are white, including six women.

The Chauvin trial is already making history in Minnesota, where it will be the state’s first case to be broadcast live on TV and streaming services. Minnesota has previously barred nearly all live video coverage from inside courtrooms, but Cahill opted to give unprecedented access to this case due to massive public interest.

Evidence presented during the trial will include recordings from the day Floyd died, including the dramatic video in which Chauvin is seen pinning Floyd to the asphalt.

Chauvin and the other three police officers who were at the scene — Tou Thao, J. Alexander Kueng and Thomas K. Lane — were fired one day after Floyd was killed. They were arrested several days later. Thao, Kueng and Lane are facing charges of aiding and abetting murder.

After his death last Memorial Day, Floyd’s name quickly became a rallying call for the Black Lives Matter movement and its allies. His death, along with other high-profile police killings of Black people, from Breonna Taylor in Louisville, Ky., to Jonathan Price in Wolfe City, Texas, brought new scrutiny to long-entrenched racism in the U.S., particularly the decades of deadly violence Black Americans have endured since slavery was outlawed.

In the past year, communities around the U.S. have been reexamining the historical figures and monuments they honor, resulting in the removal of nearly 100 Confederate monuments in 2020. Hundreds more of the monuments remain in place, according to an annual survey by the Southern Poverty Law Center.