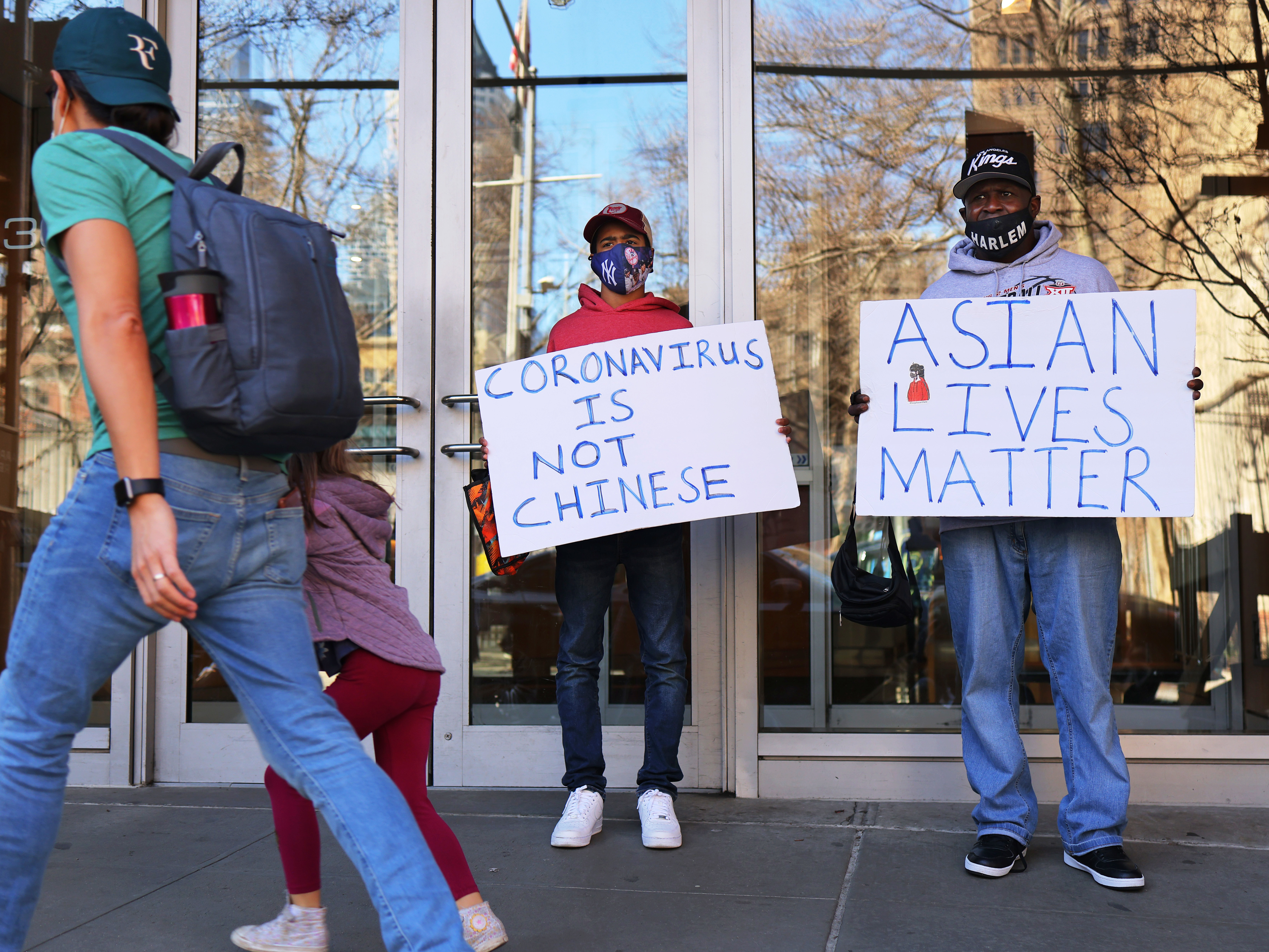 Arrest Made In Attack On Asian Woman In Manhattan, As Bystanders Watched

Authorities have arrested a suspect in the verbal and physical assault on a 65-year-old Asian woman in New York City on Monday, in an attack that was captured on surveillance video and drew widespread outrage.

In a tweet announcing the arrest, NYPD Commissioner Dermot Shea described Elliot as “a parolee out on supervised release.”

Elliot was arrested in 2000 for robbery and 2002 for murder, according to police. The Associated Press reports that Elliot was convicted of stabbing his mother to death in the Bronx when he was 19, and is on lifetime parole after being released from prison in 2019.

Police said he was identified through “multiple tips” and apprehended at his residence, which they listed as the address of a hotel that is currently serving as a shelter for people experiencing homelessness, located several blocks from the site of the attack in midtown Manhattan.

A 65-year-old Asian American woman was physically and verbally attacked by an unidentified man in Midtown Manhattan on Monday in an incident police say they are investigating as a hate crime.

Apartment building surveillance video of the assault, which appears to show security guards failing to intervene and then closing the door on the woman, has drawn horror and fury across social media.

The incident comes amid a dramatic rise in hate crimes targeting Asian Americans and is not the only high-profile attack to have taken place in New York City in recent days — or on Monday alone. At a daily briefing on Tuesday, Mayor Bill de Blasio called the video “absolutely disgusting and outrageous” and urged New Yorkers to take a more active role in combating anti-Asian hate.

Cameron Hunt and his father, Calvin Hunt, hold signs of support on Tuesday outside the West 43rd Street apartment building in Manhattan where a man physically and verbally attacked a 65-year-old Asian American woman on Monday in an incident that police are investigating as a hate crime.
CREDIT: Michael M. Santiago/Getty Images

“This is something where we all have to be part of the solution,” he said. “We can’t just stand back and watch a heinous act happening.”

The assault took place just before noon on West 43rd Street, the New York City Police Department said in a tweet accompanied by the surveillance footage. The graphic video shows a man approaching the woman, kicking her aggressively to the sidewalk, stomping on her head and upper body three times and slowly walking away.

Meanwhile, a worker is seen standing in the apartment building’s entrance and watching the attack in its entirety. As the woman tries to get up from the sidewalk, two other members of the personnel enter the camera’s frame, and one of them moves to shut the door.

The video does not capture sound, but police said the suspect “made anti-Asian statements” as he kicked the woman. CeFaan Kim, a reporter for ABC 7 Eyewitness News, wrote on Twitter that the man said, “f*** you, you don’t belong here.” He said that the woman, who was on her way to church at the time, was hospitalized with swelling to the face and pain in her left leg.

The woman suffered “a fractured pelvis and contusion to the head,” according to the station.

Kim shared additional video of the incident on Tuesday and said, citing a witness, that a man had chased down the assailant to confront him but the suspect pulled out a knife. Monday’s attack has gained widespread attention on social media, with many critics slamming the seeming inaction on the part of several bystanders.

“We’ve gone from being invisible to being seen as sub-human,” wrote Rep. Grace Meng, D-N.Y. “We just want to be seen as American like everyone else.”

The Brodsky Organization, which manages the apartment building, said in a statement that the staff member who witnessed the attack had been suspended “pending an investigation in conjunction with their union,” adding that it “condemns all forms of discrimination, racism and xenophobia” against Asian Americans.

“The Brodsky Organization is also working to identify a third-party delivery vendor present during the incident so that appropriate action can be taken,” it added.

Kyle Bragg, president of Service Employees International Union Local 32BJ, said in a statement on Tuesday that the incident remains under investigation but current information shows that the door staff — members of the union — “called for help immediately.”

NYC: Help @NYPDHateCrimes identify this individual. They want to talk to him about the assault of a 65 y/o woman, during which anti-Asian statements were made. This occurred just before noon today, near West 43rd St & 9th Ave.

“Our union is working to get further details for a more complete account, and urge the public to avoid a rush to judgment while the facts are determined,” Bragg said.

The NYPD Hate Crime Task Force is asking for the public’s help in identifying the perpetrator.

On Tuesday, Gov. Andrew Cuomo said he had directed the New York State Police’s Hate Crimes Task Force to investigate the incident as well so that the “individual responsible for this despicable act can be prosecuted to the fullest extent of the law.”

“Violence against our Asian American community is unfortunately becoming an epidemic in our state and across this nation, and it must stop now,” Cuomo said.

The NYPD is also investigating another high-profile attack that took place on Monday in which a person repeatedly punched an Asian man in the head on the subway as other passengers cried for help and called on the suspect to stop. The suspect choked the man, leaving him unconscious on the floor, before stepping off the train. Video of the incident circulated widely on social media.

The NYPD said last week that it had recorded 26 anti-Asian incidents this year, including 12 assaults, The Associated Press reported. Those include a 68-year-old man punched on a subway train, a 37-year-old woman assaulted en route to an anti-Asian violence protest and a 54-year-old woman hit in the face with a metal pipe.

Physical and verbal attacks against Asian Americans have increased significantly since the onset of the coronavirus pandemic, something that many experts attribute in large part to xenophobic rhetoric, including from former President Donald Trump.

Stop AAPI Hate, which tracks incidents of violence and harassment against Asian Americans and Pacific Islanders in the U.S., reported nearly 3,800 instances of what it calls hate incidents between mid-March 2020 and the end of February, though advocates say many more attacks are likely going unreported.

At his Tuesday briefing, de Blasio said the city would use every available tool to bring an end to what he described as a “horrible trend.”

“We know very painfully it started in Washington, D.C.,” he said. “But it has to end here in New York City.”

Also on Tuesday, the White House announced a spate of new actions in response to the rise in attacks and harassment. Initiatives include funding for AAPI survivors of domestic violence and sexual assault, a COVID-19 Equity Task Force for addressing xenophobia against Asian Americans and funding for National Science Foundation research on discrimination and xenophobia.