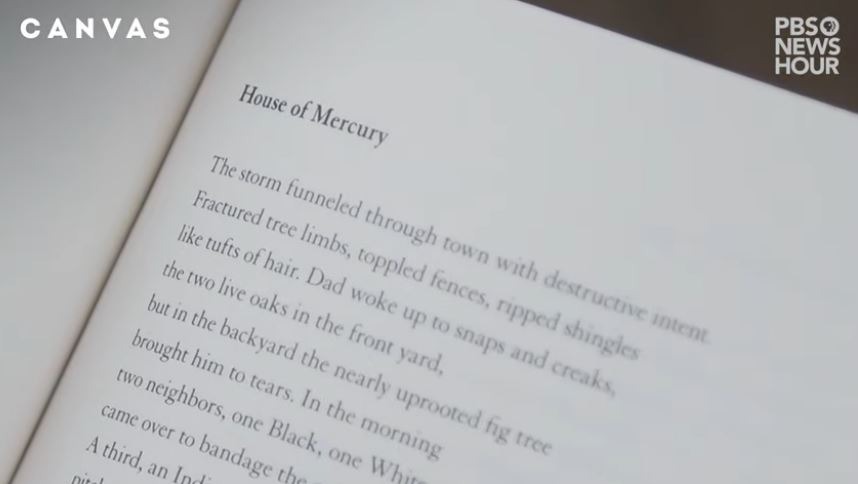 A Poem On How The Human Spirit Survives Overlapping Crises

In Dr. Fady Joudah’s poem “House of Mercury,” a severe summer storm has blown over Houston.

The storm’s destructive winds woke up the narrator’s father, who hears the “snaps and creaks” of the two oaks in the front yard. But it was a “nearly uprooted fig tree,” the poem notes, that brought the father to tears.

At first, the poem is a survey of the storm’s aftermath, with neighbors helping each other clear the wreckage from their homes. It isn’t revealed until more than halfway through the poem that we learn the storm happened during the coronavirus pandemic. A crisis on top of a crisis.

“I was elated with the beauty of the human spirit that transpired and how connected all of us are beautifully to each other and to the earth,” said Joudah, who helped his parents clean up after a strong summer storm hit their home city of Houston last year.

In the poem, a radio report asks whether a sky is bluer in the pandemic, while people are locked down in their homes. Joudah’s poem doesn’t dwell on the overlapping crises, but does take a crack at the question that’s posed by the report.

“The logical question is to ask ourselves, as the studies have been made: Are the skies bluer because we are less active on Earth and in the atmosphere since the pandemic started?” Joudah said. “And I just thought that maybe the sky is just blue because we get to stare at it for longer now.”

Driving back from his parents’ home, Joudah said he took note of the empty highways, and “it just struck me that, in the end, we cannot escape how beautiful we want to feel life is.”

The storm funneled through town with destructive intent.
Fractured tree limbs, toppled fences, ripped shingles
like tufts of hair. Dad woke up to snaps and creaks,
the two live oaks in the front yard,
but in the backyard the nearly uprooted fig tree
brought him to tears. In the morning
two neighbors, one Black, one White
came over to bandage the oaks after debridement.
A third, an Indian, stabilized the fig tree,
pitched it like a tent with rope and stake.
On the second day, I cut up the rest of the branches,
deepened the earth for the fig, enjoyed a long lazy
lunch with my parents, and on the way home heard
a radio report on whether the sky is bluer
during a pandemic. The third day
I took my son and daughter back,
we bundled up the heaps, nursed the flower beds,
delighted in another languid lunch,
hummus, falafel, shakshuka
followed by tea and stories about fear
that comes to nothing. The kids said it was the best falafel
they’d ever had. And Mom said that going forward
her morning glories will get the light they deserve.