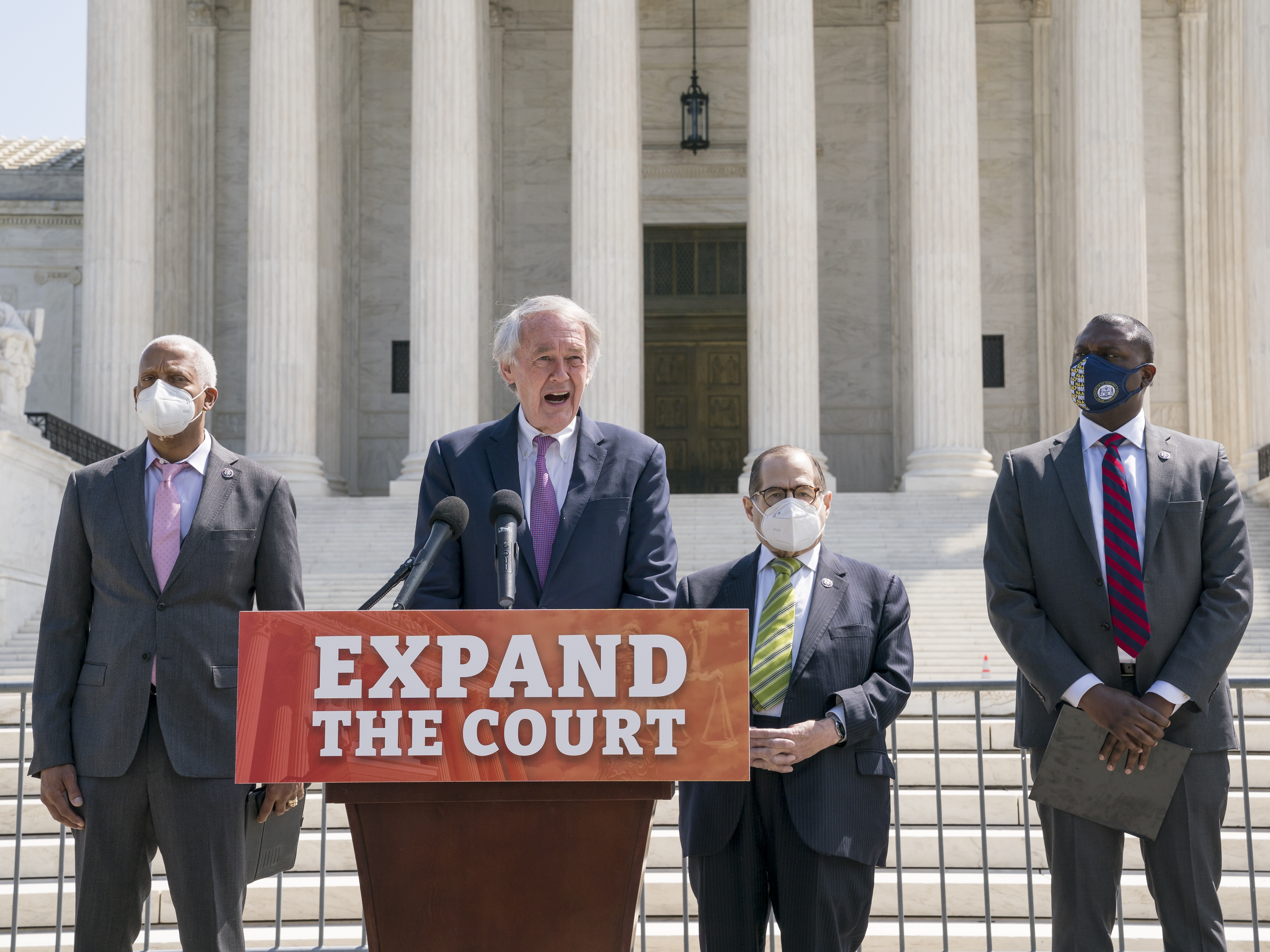 Liberal congressional Democrats unveiled a proposal Thursday to expand the number of seats on the U.S. Supreme Court from nine to 13 — a move Republicans have blasted as “court packing” and which has almost no chance of being voted on after House Speaker Nancy Pelosi said she has “no plans to bring it to the floor.”

The measure, the Judiciary Act of 2021, is being co-sponsored by Reps. Jerrold Nadler, chair of the House Judiciary Committee; Hank Johnson of Georgia; Mondaire Jones of New York; and Sen. Ed Markey of Massachusetts.

In a statement, Nadler, a congressman from New York, said the bill would “restore balance to the nation’s highest court after four years of norm-breaking actions by Republicans led to its current composition.”

At issue is the makeup of the Supreme Court, where conservatives now have a 6-3 majority. Democrats and liberal activists say this ensures the high court will strike down almost any legal challenge to the Biden administration’s legislative priorities.

Progressive groups remain enraged at what they see as Republican manipulation of the Supreme Court nomination process to give former President Donald Trump two appointments to the court: first, by blocking former President Barack Obama’s nominee to the Supreme Court for nearly a year, and then by rushing through Amy Coney Barrett’s nomination just over a month after Ruth Bader Ginsburg’s death. Trump also appointed Brett Kavanaugh following the retirement in 2018 of Anthony Kennedy.

The bill to expand the size of the Supreme Court is hardly a surprise, given that it’s the only mechanism to change the court’s composition without a constitutional amendment. Congress has changed the number of justices seven times in the course of U.S. history, but the last time was immediately after the Civil War.

Some scholars argue that Congress could also pass legislation limiting the number of years a justice could serve — most proposals are for 15- or 18-year terms. But the Constitution says that Supreme Court justices and other federal judges “shall hold their offices during good behavior,” and that has long been interpreted to mean they cannot be removed except by impeachment by the House of Representatives and conviction by the Senate. Changing that would seem to require a constitutional amendment, which requires approval by two-thirds of the House and Senate, and three-quarters of the states. So the expansion bill, requiring only a simple majority of both chambers, is an easier way to go.

“We are here today because the United States Supreme Court is broken. It is out of balance, and it needs to be fixed,” Markey said at the news conference. “Too many Americans view our highest court in the land as a partisan, political institution, not our impartial, judicial branch of government.

“Too many Americans have lost faith in the court as a neutral arbiter of the most important constitutional and legal questions that arise in our judicial system, and I’m disappointed to say too many Americans question the court’s legitimacy,” he said.

Republicans were scathing in their response to the measure. Senate Minority Leader Mitch McConnell of Kentucky accused Democrats of “threatening judicial independence from the steps of the court.” Sen. Tom Cotton of Arkansas tweeted that the move would “destroy the court.”

But the bill has a grim future even without GOP opposition. Asked about the proposal at her weekly news conference, Pelosi said: “I have no plans to bring it to the floor.”

The House speaker added: “I support the president’s commission to study such a proposal.”

President Biden signed an executive order last week setting up a bipartisan commission to study reforming the court, and, among other things, examining the size of the court and the justices’ lifetime appointments. The announcement marked the culmination of a campaign promise Biden made when repeatedly pressed on whether he would expand the Supreme Court to pack it with justices more aligned with his worldview.

As a Democratic candidate, Biden said he opposed expanding the court but said he favored the kind of bipartisan commission his White House has since unveiled.