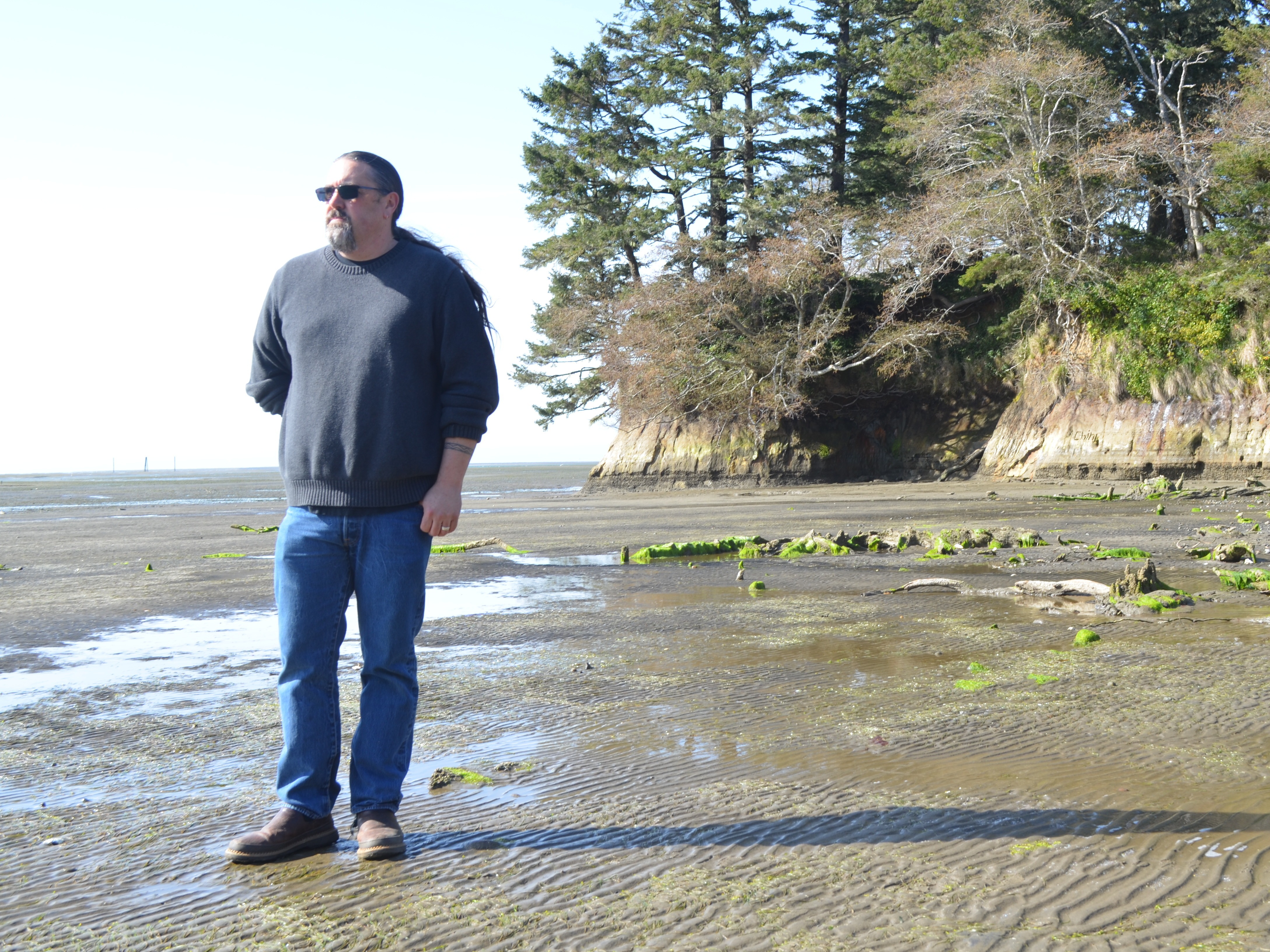 The Chinook Indian Nation has about 3,000 members who mostly live near the mouth of the Columbia River in southwest Washington. But they’re not on the list of federally recognized tribes — so they get nothing from the Indian Health Service.

“We have all the problems of Indian Country, but no means of dealing with it,” Chinook chair Tony Johnson says. Without recognition, they get no reservation, no housing allowance, no clinics.

And, during the pandemic, no federal recognition has meant no testing supplies or vaccine allocations.

Tony Johnson is chair of the Chinook Indian Nation, a federally unrecognized tribe. He stands on a Willapa Bay, Wash., beach, where he got married and not far from where his ancestors lived. CREDIT: Eilis O’Neill/KUOW

“So we rely on our neighboring tribes,” Johnson says, “which means that people are traveling an hour or two or three to be able to access vaccinations, testing and other resources.”

The nearby Shoalwater Bay Tribe, for example, gave Johnson his COVID-19 vaccine.

The Indian Health Service has been lauded for the success of its vaccination campaign. But not every Native American got to be part of that. Tribes that aren’t recognized by the U.S. government have received none of the resources directed to Indian Country to help them survive the pandemic.

More than 200 tribes do not have federal recognition, affecting tens of thousands of tribal members. The U.S. government officially recognizes 574 tribes.

Over the past year, unemployment spiked in southwest Washington, and, with it, addiction problems, Johnson says. But the Chinook receive no federal funds for drug and alcohol programs.

And, without their own clinic, many Chinook members forego medical care rather than travel hours to see a doctor, Johnson says.

As a result, he says, though no local tribal members died of COVID-19, several died because of COVID-19 — some of addiction, and others of untreated chronic conditions like diabetes and heart disease.

“We have lost folks in the community over the last year that would not have been lost were Chinook to have been a federally recognized community,” he says. “And that is unbearable.”

Many tribes are federally recognized because, at some point, they signed a treaty agreeing to give up their land. For complicated reasons, the Chinook Nation isn’t recognized even though they did, at one point, sign a treaty.

“It was an accident of history that left some off the list and included others,” says John Norwood, of the National Congress of American Indians. He works on federal recognition issues.

He says gaining federal recognition now can be nearly impossible, regardless of a tribe’s history. On paper, it’s one thing.

“The regulations as they stood appeared to be just fine,” he says.

But how they’re used is a different story.

Another Western Washington tribe the U.S. government refuses to recognize is the Snohomish. They’re the namesake of the county north of Seattle.

“We will continue to be here as long as the mountains still exist and the rivers run through the forest out into the sea,” says the Snohomish Tribe’s chair, Mike Evans.

He says, today, the tribe has about 1,500 enrolled members, but — “we don’t have a clinic, we don’t have the vaccines to distribute, and there’s no money to deal with that.”

And, without federal recognition, there won’t be any money in the future either.

The most recent COVID-19 relief package included more than $31 billion for the tribes on the federal government’s list. It’s the largest financial aid to Indian Country ever. And that’s in addition to funds earmarked for tribes in the prior two relief bills.

“The once-in-a-lifetime, once-in-a-generation infusions of funds will be having impact on those communities generations to come,” Johnson says. “It’s heartbreaking that my own Chinook Indian Nation doesn’t have access to some portion of those resources.”