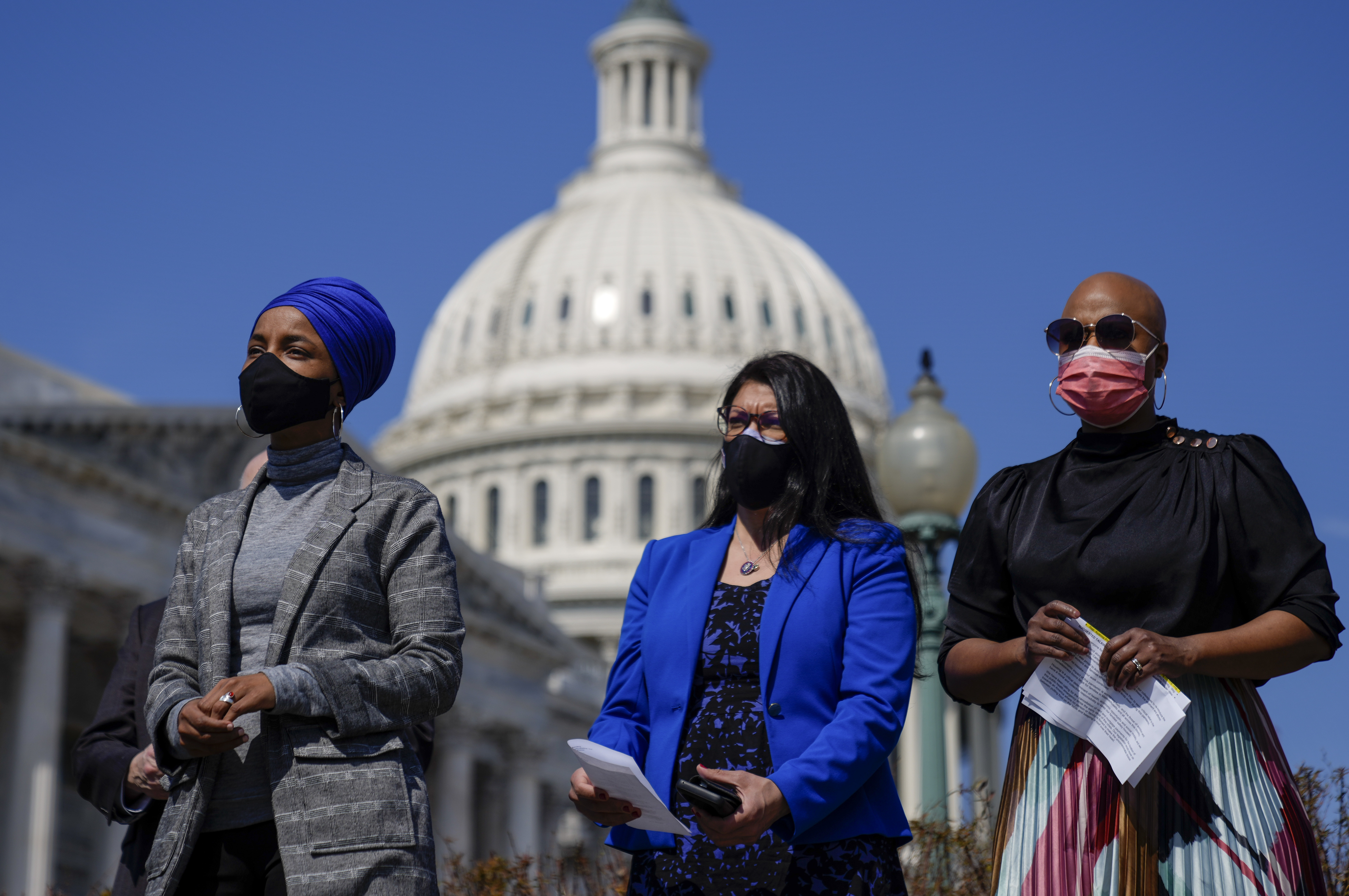 White House Walks Back Order On Refugee Limits After Backlash

The White House has walked back its announcement that it will keep this year’s historically low refugee ceiling of 15,000 set by the Trump administration, saying its earlier statement Friday, which was panned by fellow Democrats, was meant only to ease restrictions from countries from which refugees are currently banned.

The White House said President Biden would raise the cap by May 15.

Press secretary Jen Psaki said the earlier announcement was made because Biden “was urged to take immediate action to reverse the Trump policy that banned refugees from many key regions, to enable flights from those regions within days; today’s order does that.”

Reps. Ilhan Omar (from left), Rashida Tlaib and Ayanna Pressley, seen here at a news conference last month outside the U.S. Capitol, are among those calling on the Biden administration to lift the cap on refugees.
Drew Angerer/Getty Images

She said Biden would “set a final, increased refugee cap for the remainder of this fiscal year by May 15.” The fiscal year ends Sept. 30.

The White House has been under increasing pressure from refugee advocates and congressional Democrats to make good on a campaign promise to raise the number to 125,000. A February State Department report to Congress proposed a figure of 62,500 for the fiscal year.

The about-face on Friday came after the initial White House decision was panned by Democrats, refugee advocates and human rights groups.

“We are reaching out to the White House to understand why this figure is a fraction of what the administration committed to in congressional consultations,” Krish O’Mara Vignarajah, president and CEO of the Lutheran Immigration and Refugee Service, one of the agencies involved in refugee resettlement in the United States, said after the initial announcement.

“Say it ain’t so, President Joe,” he said in a statement.

Julian Castro, a former secretary of Housing and Urban Development, called it “a bad decision,” and Rep. Pramila Jayapal, D-Wash., said it was “simply unacceptable and unconscionable.”

The White House denied accusations that the initial move was motivated by political pressure due to the situation at the U.S.-Mexico border — which in March saw the largest number of migrant encounters in at least 15 years.

“America needs to rebuild our refugee resettlement program,” national security adviser Jake Sullivan said in a tweet explaining the initial response. “We will use all 15,000 slots under the new Determination and work with Congress on increasing admissions and building back to the numbers to which we’ve committed.”

Those remarks were reiterated by Psaki, the White House press secretary, who said on Twitter: “This is just the beginning.”

Friday’s announcement came as progressive lawmakers, including Jayapal, called on the president to fulfill his campaign pledge.

“Having fought for four years against the Trump Administration’s full-scale assault on refugee resettlement in the United States, we were relieved to see you commit to increasing our refugee resettlement numbers so early in your Administration,” Reps. Ilhan Omar, D-Minn., Jayapal, and Jan Schakowsky, D-Ill., wrote in a letter. “But until the Emergency Presidential Determination is finalized, our refugee policy remains unacceptably draconian and discriminatory.”

Refugee resettlement, a bipartisan issue since President Jimmy Carter signed the Refugee Act of 1980, became a political hot potato during the Trump years.

Former President Donald Trump made deep cuts to the maximum number of refugees the U.S. accepts each year, characterizing refugees as a danger to national security. The current level, 15,000, is the lowest since Carter signed the law. In the year before Trump’s election, the U.S. resettled 84,995 refugees against a cap of 85,000.

The letter from Democratic lawmakers also referenced refugees who were cleared for resettlement but have been waiting in limbo until the White House formalizes the change in policy.

“We must keep our promises to people who have fled unthinkably brutal conditions in their home countries and live up to our ambition to provide them a safe haven to re-start their lives,” the letter added.

Omar, who was one of the first two Muslim American women elected to Congress in 2018, is also the first African refugee to become a member of Congress.

The letter had 35 additional signatures as of Friday morning, including members of the so-called squad: Democratic Reps. Ayanna Pressley of Massachusetts, Rashida Tlaib of Michigan and Alexandria Ocasio-Cortez of New York.

During the presidential campaign, Biden promised to set the yearly cap on refugee admissions to 125,000 and “raise it over time commensurate with our responsibility, our values and the unprecedented global need.”

“The United States’ moral leadership on refugee issues was a point of bipartisan consensus for so many decades when I first got here,” he said at the State Department in February, pledging to approve an executive order to restore the admissions program to meet global demand. “It’s going to take time to rebuild what has been so badly damaged, but that’s precisely what we’re going to do.”

That same month, the State Department issued a report to Congress proposing an increase in refugee admissions to 62,500 for the fiscal year.

House Speaker Nancy Pelosi, D-Calif., told reporters Thursday the U.S. has to “recognize [its] moral responsibility” in taking in refugees.

“I think right now we have, well, it’s a very few thousand, and we have to increase that number.”