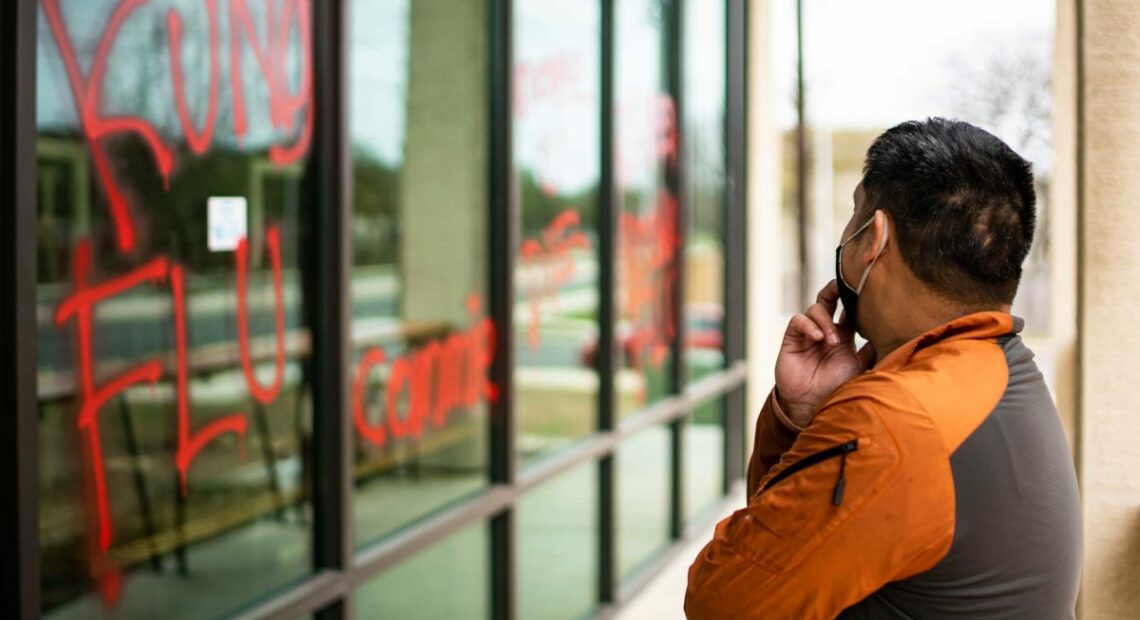 Oregon’s Jade District is a 10-block area neighborhood in East Portland that is home to dozens of Asian-owned businesses, from grocery stores to herbal markets, bakeries and restaurants that include a James Beard-recognized Vietnamese soup spot.

But in the first two months of the year, at least 13 businesses there had their windows smashed, which community leaders say was the result of anti-Asian hate fueled by misguided scapegoat rhetoric about COVID-19. A month after the fatal March 16 shootings at Atlanta-area spas that left eight people dead, including six Asian American women, Asian American businesses across the country are reeling from the spate of hate and violence, and some say they’re operating in fear — adding to the economic crisis many businesses have been grappling with since the beginning of the pandemic.

“We don’t have a peace of mind to sleep,” said Rosaline Hui, a retail store owner in the Jade District and owner and editor of the Portland Chinese Times newspaper. “The first time it happens to you, maybe you feel it’s so scary. The second time and third time and fourth time, what do you feel? You feel numb.”

Hui has heard from Asian-owned businesses around the district that say they’ve been vandalized multiple times — rocks thrown in windows or doors broken in — and she believes reports to police are going nowhere. The Portland Police Bureau said it is in the midst of a staffing shortage and prioritizes situations that involve life safety over property crimes. “At times our ability to do followup investigation on vandalism is limited … unless there is clear indication of a bias motivation as that would elevate the investigative response,” Sgt. Kevin Allen said in a statement.

While the issue has pervaded communities for decades, the pandemic has brought renewed attention to the issue, as groups like Stop AAPI Hate have documented upwards of 3,800 incidents — more than a third of which occurred at businesses.

“We’re working with small business owners who feel concerned about their business, that are dealing with this on top of all of the other challenges of the pandemic right now,” said Allie Yee, development and communications director of the Asian Pacific American Network of Oregon (APANO). 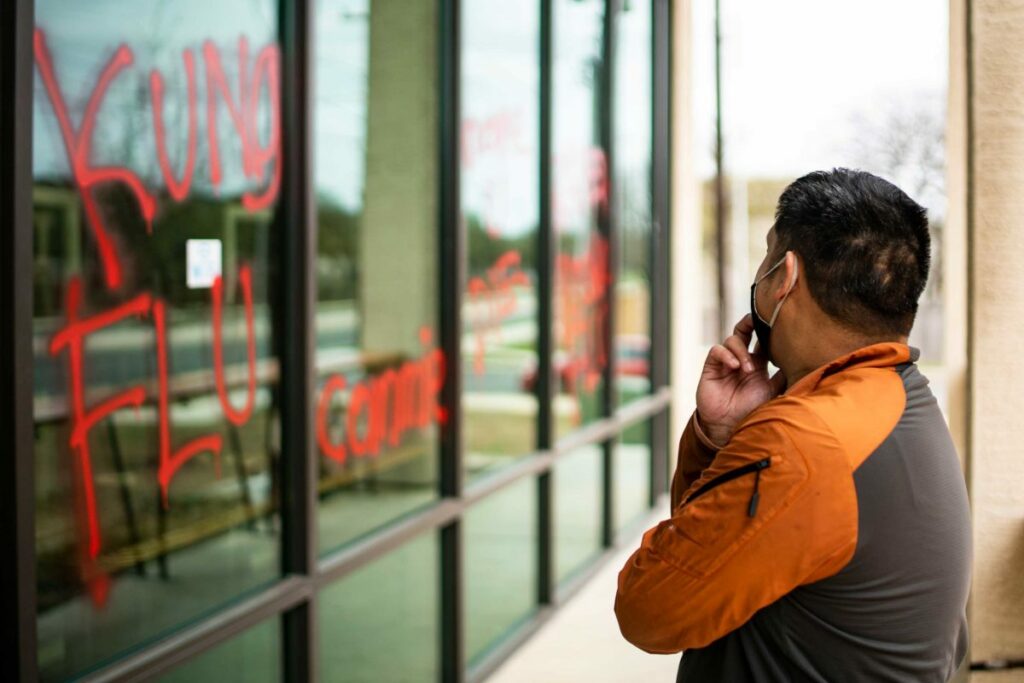 In 15 of the United States’ largest Chinatown neighborhoods, businesses are slowly rebounding from the initial pandemic hit and a winter slump — especially in Hawaii and Nevada, according to data provided to the PBS NewsHour from business reviews platform Yelp. In Chinatown business reviews around the country, mentions of the pandemic — including keywords like “virus,” “corona” and “COVID” — are also down about 50 percent since April 2020. But, in Washington, D.C., Chinatown has had the largest drop in customer interest (defined as viewing a business page, posting a review or posting a photo) — down about 63 percent since March 2020.

While business is mostly rebounding, the hate is persisting.

In San Antonio, Texas, Mike Nguyen’s ramen restaurant was vandalized with phrases like “Go back 2 China” and “Ramen noodle flu” in mid-March after he reiterated the restaurant’s mask-wearing policy after the Texas governor ended the statewide mandate. “[Even] if my business were to close, at least I can walk away saying that I contributed to keeping the community safe and not endangering them,” said Nguyen, whose restaurant is back open after a brief closure in early April. “We had the most powerful man in America call [COVID-19] the ‘China virus,’ the ‘Kung Flu,’ … When you say stuff like that, you don’t think people are going to not say the same thing?”

“It’s been devastating, humiliating, dehumanizing,” said Susan Au Allen, the CEO and national president of the U.S. Pan Asian American Chamber of Commerce Education Foundation (USPAACC), the largest organization representing Asian American businesses. “[Asian Americans] truly are afraid of getting out, but they have to make a living — they got to go and do what they have to do, with the best safety measures they can take.”

After three years of operating their Vietnamese and Thai cuisine establishment, working seven days a week, Riverside, Ohio, restaurant owner Noppadol Mangmeesub and his wife Kanokwan Mangmeesub said the economic realities of the pandemic, coupled with the fears around anti-Asian sentiment, have led them to decide to close their business at the end of May. The restaurant shares a building with an Asian grocery store next door. In January, a vehicle on the property was vandalized with profanity-laden graffiti and the term “Chinese virus.” In February, there was a fire on the building’s roof, which police say was arson but have not identified any suspects.

The City of Riverside Police Department said it’s still working with the FBI on investigating these cases and has increased patrols in the area. But Noppadol said he doesn’t feel safe in the meantime. “I don’t know who is going to come in and harm us,” said Noppadol, who is originally from Thailand and has lived in the U.S. for about 15 years. “I no longer want to deal with this.”

WATCH: Tracing the history of anti-Asian violence in America

Between March 2020 and February 2021, about 35 percent of discrimination reported to Stop AAPI Hate happened at businesses, the top location for reports. “We’ve always known that essential workers — people who continue to have to work outside of the home — have always been in danger, not just of COVID, but of course, because of the surge in anti-Asian racism,” Stop AAPI Hate co-founder Cynthia Choi told the PBS NewsHour.

“[Asian Americans] had nothing to do with [the virus],” Nguyen said. “We’re going through the same issues that everyone else is going through — the same heartache, the hardships.”

President Joe Biden’s administration is actively working to address xenophobia against Asian Americans, as the Senate advances hate crime legislation But advocates say the condemnation of hate must come from not only national leaders, but local leaders, too.

“We need local elected officials in all communities across the country to be reaching out, because I can guarantee that many Asians in all communities have experienced some form of discrimination or hate in the last year,” said Margaret Huang, president and CEO of the Southern Poverty Law Center, a prominent racial justice organization. “It is unbelievable how widespread this is.”

Governors from more than half the nation’s states have publicly condemned anti-Asian sentiments and violence. California Gov. Gavin Newsom, whose state has the highest Asian American population in the U.S., passionately denounced the hate in a March news conference, saying it was “painful and infuriating.” Mayors of both political parties from Fresno, California, to New Orleans to Dallas to Madison, Wisconsin, have all called for an end to the harassment.

Huang says while people might be paying attention when the hate has risen to the level of a criminal act, violence is usually preceded by lower-level discrimination. “It could be slurs, it could be name-calling, it could be vandalism,” she said. “Those precede the larger incidences of violence across history.”

By the time Colorado went under its stay-at-home order in March 2020, Asian-owned small businesses were already 30 to 40 percent behind because of misguided fears around COVID, business leaders there said.

That could be why Asian-owned businesses are now seeing government resources in a new light — beyond just a regulatory function or tax collection entity. “Some of our work during the pandemic has been to help small business owners navigate business grant relief programs, and help distribute some of those dollars to these small businesses,” Yee of APANO said. “That was like the first time that they realized that there are resources available to them that people wanted to help them through this time. That’s been pretty profound.”

A Bloomberg analysis of the first round of Payment Protection Program loans, for example, found more businesses in majority-white congressional districts were receiving loans than businesses in districts where the majority of residents were people of color.

The business community is also learning more about what their responsibilities are in this current climate, said Choi of Stop AAPI Hate. She said some restaurants, for example, have been concerned about their staffers commuting at late hours in the evening for fear they might be targeted.

“You have a high turnover rate, because it’s like, what job is worth getting attacked? This is a major concern … folks are taking very, very seriously,” Choi said.

The responsibility also carries over to protecting customers. “We’ve had situations where employees have conducted themselves in ways that are problematic, or in situations where they haven’t intervened,” Choi added.

In New York City, two doormen were fired after not helping an Asian American woman who was brutally attacked on the sidewalk in March.

And similar incidents have occurred at businesses from coast to coast.

READ MORE: What you can do to fight violence and racism against Asian Americans

“I was standing in an aisle at [a hardware store] when suddenly I was struck from behind,” a 67-year-old Asian American in San Francisco reported to Stop AAPI Hate, which shares anonymized firsthand accounts in its public reports. “Video surveillance verified the incident in which a white male used his bent elbow to strike my upper back. Subsequent verbal attacks occurred with ‘Shut up, you Monkey!,’ ‘F**k you Chinaman,’ ‘Go back to China’ and ‘Stop bringing that Chinese virus over here.’”

Allen of the USPAACC believes younger, more social media-savvy generations have helped bring anti-Asian hate to the public eye. “The older generation will be very hesitant in saying anything — sometimes they won’t even tell relatives. They suffer in silence,” she said. “I think it took this newer, younger generation to start what I call a revolution in thinking and reaction.”

Yee doesn’t believe more policing is a long-term solution and instead advocates for nearby communities to build trust and strengthen ties to one another. While there are a lot of Asian and Pacific Islander immigrants in Portland’s Jade District, there are also several Latinx, Black, Russian and Slavic people, Yee says.

“If you look at the history of Oregon, Asian-owned businesses have been targeted and vandalized — that’s been the thread of intimidation,” she said. “You overcome that by continuing to be here and to rebuild with each other … I think that very much requires solidarity across Black, Indigenous and people of color.”