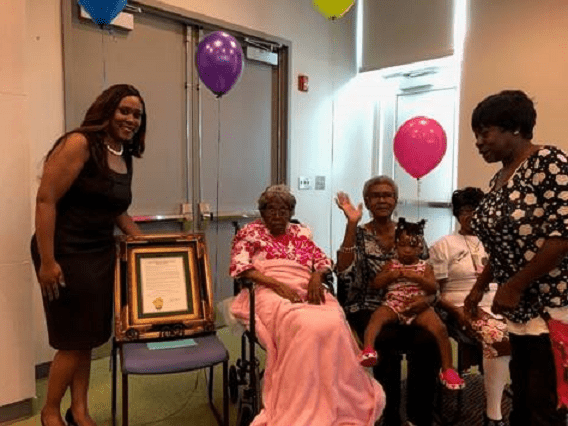 Hester Ford, who was America’s oldest person living, died at her home in Charlotte, N.C., on April 17. Ford was at least 115 years old, though some records say she was possibly 116.

Ford lived through sharecropping, the 1918 flu pandemic, the Great Depression, World War I and II, Jim Crow laws, the civil rights movement and the coronavirus pandemic.

After growing up on a farm, she got married at age 14 to John Ford, and the pair purchased a farm and started raising their family in Lancaster, S.C. Together they had 12 children, four of whom are still alive, 68 grandchildren, 125 great-grandchildren and at least 120 great-great-grandchildren.

Hester Ford (center) celebrates her birthday in 2019 with her family members. Ford died last Saturday at 115 or 116.
CREDIT: Tanisha Patterson-Powe

“She was a pillar and stalwart to our family and provided much needed love, support and understanding to us all,” Tanisha Patterson-Powe, Ford’s great-granddaughter, said in a statement on Facebook. “She was the seed that sprouted leaves and branches which is now our family. God saw fit to make her the matriarch of our family and blessed us to be her caretakers and recipients of her legacy.”

Patterson-Powe told NPR’s Weekend Edition that her family relocated from Lancaster to Charlotte after a family member was brutally killed in the 1950s and her great-grandparents worried what might happen next if they stayed. She notes that lynchings were prevalent.

After living in Charlotte for a few years, the couple decided to purchase a home there.

“It was the early ’60s. And if you can imagine a Black family being able to purchase a home during that time — what a significant accomplishment if you really process that,” Patterson-Powe said. “That’s the home that my great-grandmother peacefully passed in last Saturday.”

Her husband died in 1963 at age 57 and Ford continued to live in the house without assistance until she was 108, according to The Charlotte Observer. It was then that Ford fell and her family decided she needed some assistance.

“Her light shined beyond her local area and she lived beyond a century with memories containing real life experience of over 100 years,” Patterson-Powe wrote. “She not only represented the advancement of our family but of the Black African American race and culture in our country. She was a reminder of how far we have come as people on this earth.”

During her lifetime, Ford saw 21 people become president of the United States, but it was a special moment for her when Barack Obama was inaugurated.

“She never thought she would see a Black man elected as president,” Patterson-Powe told NPR.

At one point during his time in office, Obama and Michelle Obama sent Ford a letter for her 111th birthday.

Patterson-Powe recalls Obama’s letter reading: “Your story is an integral part of the American narrative, and you have witnessed the best of what our nation can accomplish when we work together in pursuit of a brighter tomorrow.”

“She took a lot of pride in that,” Patterson-Powe said.

Ford knew how important it was to vote, because there was a time in her life when she wasn’t allowed to because she was Black, Patterson-Powe said. She even made a point to get out and vote during the last year’s election amid a pandemic.

“She got fully dressed. You would have thought she was going to church. But she had on her tan dress that was trimmed in white, and it had some sequin on it. And she had on her hat and her white sneakers. And she voted,” Patterson-Powe said. “And she came back home. She did her job.”

Many people have asked what was the supercentenarian’s secret to longevity. Patterson-Powe said she’s not certain there’s any one secret but that Ford was disciplined in her faith, praying multiple times daily.

As Patterson-Powe looks to the years ahead, she said she wants to carry her great-grandmother’s sense of resilience forward.

“I’m hoping I can be half of the strong woman that she was and believe the way she believed and grab hold of what’s happening in the moment,” Patterson-Powe said.