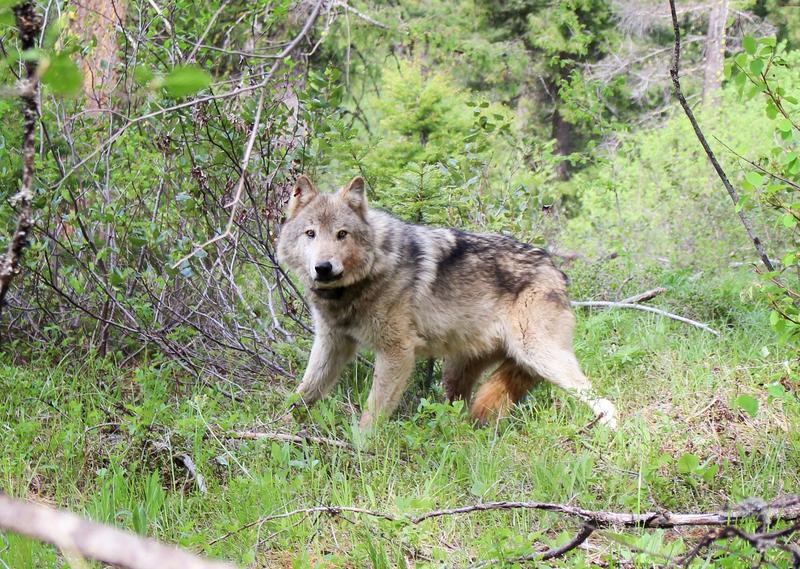 Wolf Numbers Continue To Grow In Washington, But Still No Hunting As Idaho Allows

The number of wolves in Washington state rose strongly last year, according to an annual report from the state Department of Fish and Wildlife released Friday. The rate of increase was more than double what Oregon reported earlier in the week for its wolf population in 2020.

The gray wolf population in Washington state increased by 22% in the past year, raising the minimum number of wolves documented by state and tribal biologists to 178 in 29 packs — up from 145 wolves and 26 packs at the end of 2019. A combination of in-migration from neighboring states and Canada plus births within existing packs probably accounted for the increase, biologists told the state Fish and Wildlife Commission during a briefing Friday.

The majority of the state’s wolves are still concentrated in northeastern Washington. Under state rules set a decade ago, the gray wolf is not considered recovered until the species also recolonizes the South Cascades and Olympic Peninsula region. 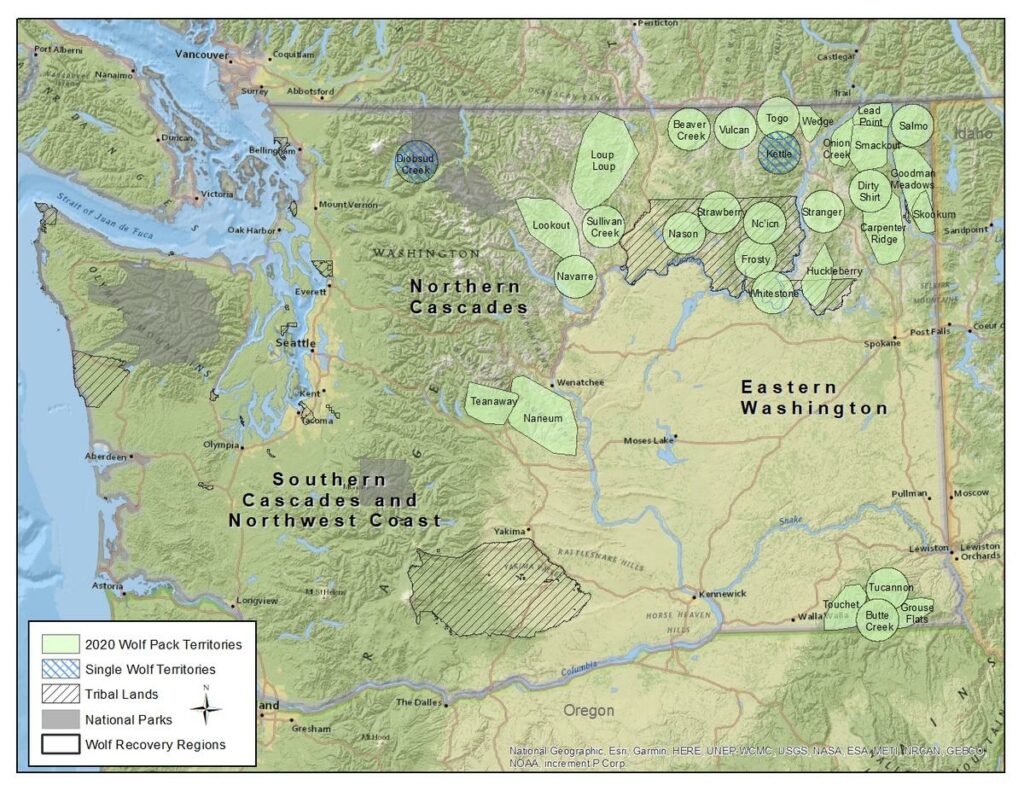 “As more packs establish in the North Cascades, it’ll be far easier for wolves to make that jump south and get into the South Cascades,” Maletzke said Friday. “I just don’t know the timeframe and how long it will take.”

Given the uncertain timeline to full recovery, it is also unclear when policymakers in Olympia might accede to persistent requests from ranchers and sportsmen to be able to hunt wolves, as is the case in Idaho.

Forty-six of the wolves counted in the latest wolf census were reported by the Colville Confederated Tribes on their north-central Washington reservation. A few years ago, the tribe authorized wolf hunting by its members. Tribal hunters killed eight wolves in 2020, according to the WDFW annual report.

States took over full responsibility for gray wolf management at the beginning of this year when the outgoing Trump administration declared the species recovered from endangered status in the lower 48 states. Several lawsuits have challenged the federal delisting, but in the meantime states and tribes are calling the shots literally and figuratively.

During 2020, seven Washington packs were blamed for attacks on sheep or cattle. WDFW killed three wolves in the Wedge pack last year, the entire known pack, because of repeated livestock depredations by those animals.

Fur trapping, hunting and predator control bounties extirpated wolves from Washington state around the 1930s. Wolves returned on their own from Idaho and British Columbia beginning in 2008.

The Washington population update was released a day after Oregon unveiled its new tally of the wolf population in the state. The Oregon Department of Fish and Wildlife said it directly counted 173 wolves this past winter, an increase of almost 10% from the year before.

While the population of Oregon wolves increased, they occupied similar ranges to prior years. The number of Oregon counties with wolves stayed the same at 12 and the number of wolf packs also held steady at 22 in 2020.

The wolf population in neighboring Idaho is much higher — around 1,500 according to Idaho Department of Fish and Game estimates. The Republican-controlled Idaho Legislature this week laid the groundwork for an aggressive cull of Idaho’s wolves.

Legislation passed by the Idaho Senate on Wednesday and now moving speedily through the state House would increase funding for private contractors to cut the wolf population from about 1,500 to as few as 150. It also allows the use of night vision equipment to help kill wolves as well as hunting from snowmobiles and all-terrain vehicles, among other changes.

Backers said there are too many wolves and they are attacking cattle and sheep, costing ranchers hundreds of thousands of dollars. They also said they are reducing elk and deer populations and taking away opportunities for hunters.

The proposed reduction in wolf numbers is so dramatic — as much as 90% — that it may invite federal intervention. It is already provoking an outcry from environmental groups such as the Center for Biological Diversity and Idaho Conservation League.

On Friday, Washington Fish and Wildlife Commission member Fred Koontz called Idaho’s actions especially “troubling” given how much wolves wander back and forth across state lines.

“While we can celebrate what is going on in Washington, long term population persistence of wolves in Washington is totally linked to what is happening in British Columbia, Idaho, Montana and Oregon,” Koontz said.

The Associated Press contributed to this report.

Idaho Gov. Brad Little has signed into law a measure that could lead to killing 90% of the state’s 1,500 wolves in a move that was backed by hunters and the state’s powerful ranching sector but heavily criticized by environmental advocates. Continue Reading Governor Signs Bill Allowing For Killing Of Up To 90% Of Wolves In Idaho