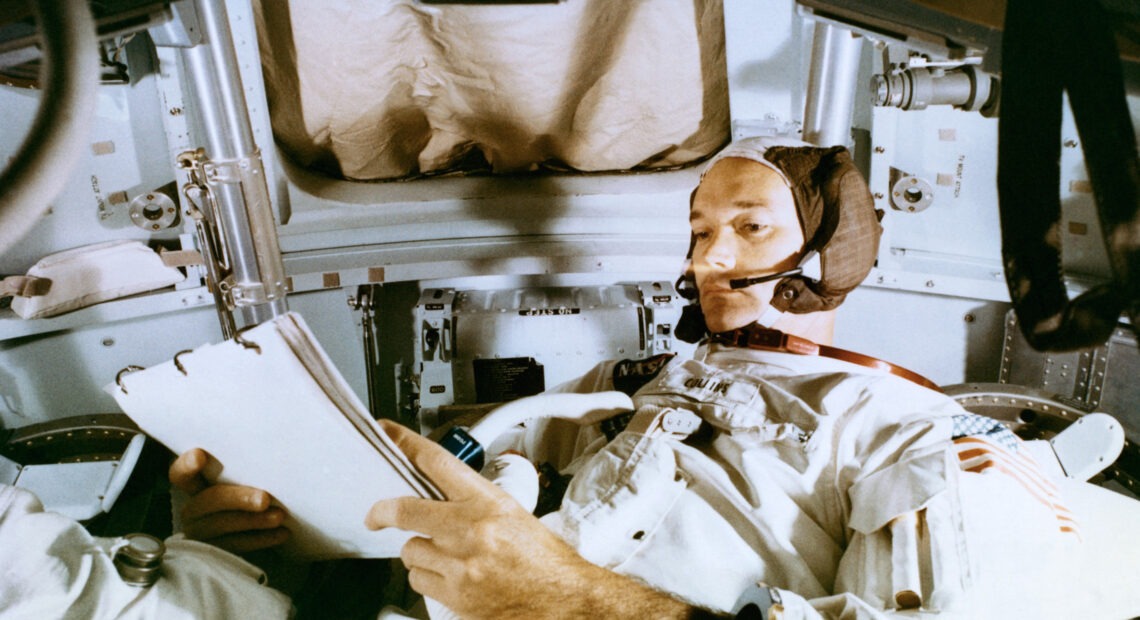 An astronaut who flew on one of the most famous space missions of all time has died. Michael Collins, 90, was part of the three-member crew on Apollo 11, the first lunar landing mission in 1969. Unlike Neil Armstrong and Buzz Aldrin, he never walked on the moon. Collins stayed behind and piloted the command module as it circled above. Because of that, Collins is often called the ‘forgotten astronaut’.

Collins had been battling cancer. In a statement released by his family, “He spent his final days peacefully, with his family by his side. Mike always faced the challenges of life with grace and humility, and faced this, his final challenge in the same way.”

NASA Administrator Steve Jurczyk said the nation lost a true pioneer, “NASA mourns the loss of this accomplished pilot and astronaut, a friend of all who seek to push the envelope of human potential. Whether his work was behind the scenes or on full view, his legacy will always be as one of the leaders who took America’s first steps into the cosmos. And his spirit will go with us as we venture toward farther horizons.” 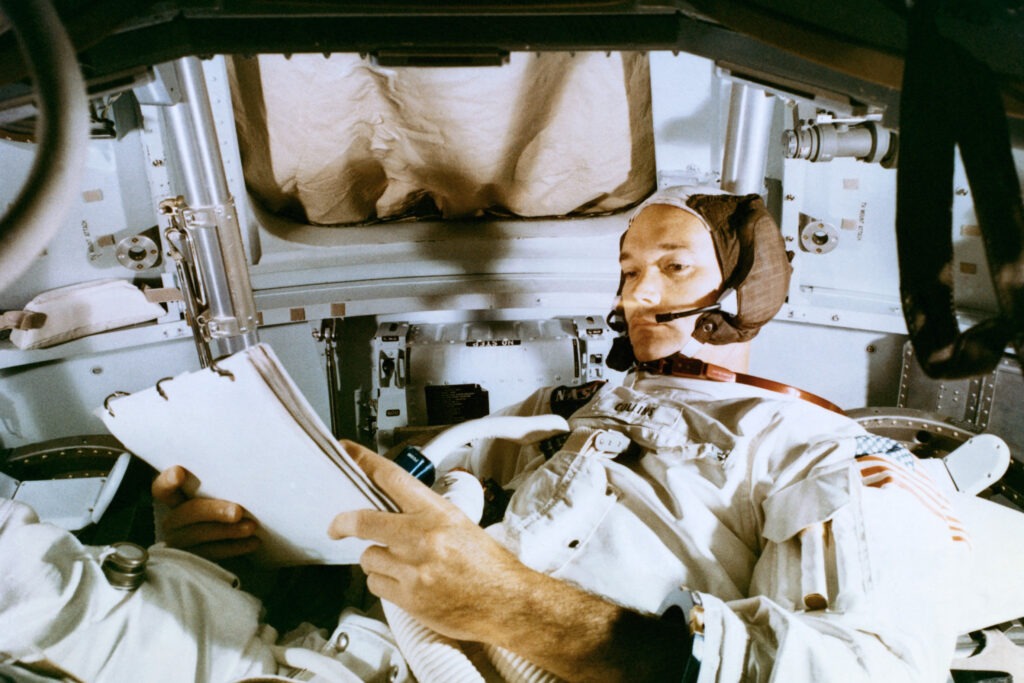 When Neil Armstrong first stepped on the moon and uttered the famous phrase, “Houston, Tranquility Base here, the Eagle has landed,” Collins was in orbit, 60 miles above, just as busy, and just as excited, telling the team back in Houston he was listening to communications with his comrades, and it was “fantastic.”

Aldrin and Armstrong were on the lunar surface just under 22 hours. The world was transfixed. Seeing them bunny-hop along, take pictures and collect lunar samples during their single, short moonwalk. All the while, Collins circled the moon. Looking down at the barren lunar landscape and peering back at the Earth. “The thing I remember most is the view of planet Earth from a great distance,” he said later. “Tiny. Very shiny. Blue and white. Bright. Beautiful. Serene and fragile.”

As he orbited, half the time he could talk to controllers but when he was on the back side of the moon, he was completely cut off. It was because of this part of the mission that some dubbed him the loneliest man in humanity. As he recalled in a 2016 NPR interview, he didn’t think of it that way. He said, “The fact that I was … out of communications, rather than that being a fear, that was a joy because I got Mission Control to shut up for a little while. Every once in a while.”

“It’s a shame that when people are asked, ‘Can you name the Apollo 11 crew.’ Mike Collins is normally the name that doesn’t come to mind,” said Francis French, space historian and author of many books on the space program. “Because in many ways he was the keystone of the mission. He was the one who really knew how to fly the spacecraft solo (the only person who flew a spacecraft solo in the entire mission) and the only one who could get all three of them home.”

“And if something went wrong with the lunar lander that Neil Armstrong and Buzz Aldrin were in,” French noted, “Michael Collins had the engine that could try to rendezvous with somewhere around the moon and rescue them.”

Mike Collins was born in 1930 in Rome, Italy where his dad was a major general in the U.S. Army. Service and duty were a part of Collins his whole life. He graduated from the U.S. Military Academy at West Point and later joined the Air Force and became a test pilot.

NASA chose him as an astronaut in 1963 and his first flight was aboard Gemini 10. On that mission he became the fourth human to conduct a spacewalk.

As a boy, Collins dreamed of going to space. “I used to joke that NASA sent me to the wrong place, to the moon,” he said, “because I think Mars is a more interesting place. It’s a place I always read about as a child.”

Mars was also a place he wrote about as an adult. Collins authored several books and one, Carrying the Fire, is considered the best of all the astronaut autobiographies. 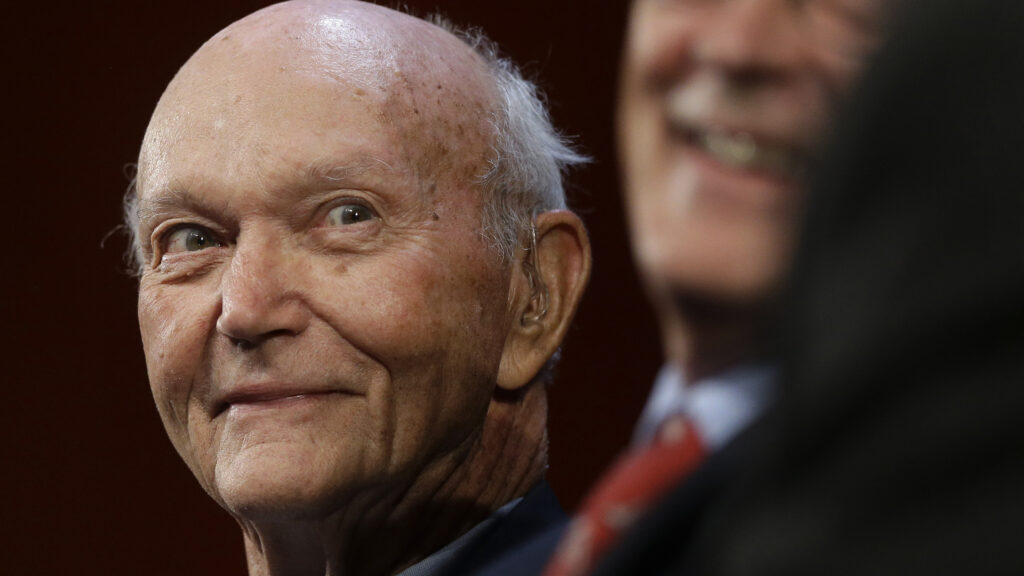 Apollo 11 was his final trip to space and he never dwelled on missing a chance to step on the moon. “As an astronaut I always thought I had the best job in the world and I still think that,” he said, “but for me when it was over it was over.”

Still, he said he would look up and see the moon, and think, ” ‘Oh my God! I’ve been there!’ I was up there, you see. Kind of takes me by surprise despite all these years.”

Collins achieved the rank of major general. He left NASA in 1970 to join the State Department. Later he became director of the Smithsonian National Air and Space Museum in Washington, overseeing its construction and opening in 1976.

In his later years, Collins didn’t slow down. He competed in triathlons, loved fishing and even took up painting.