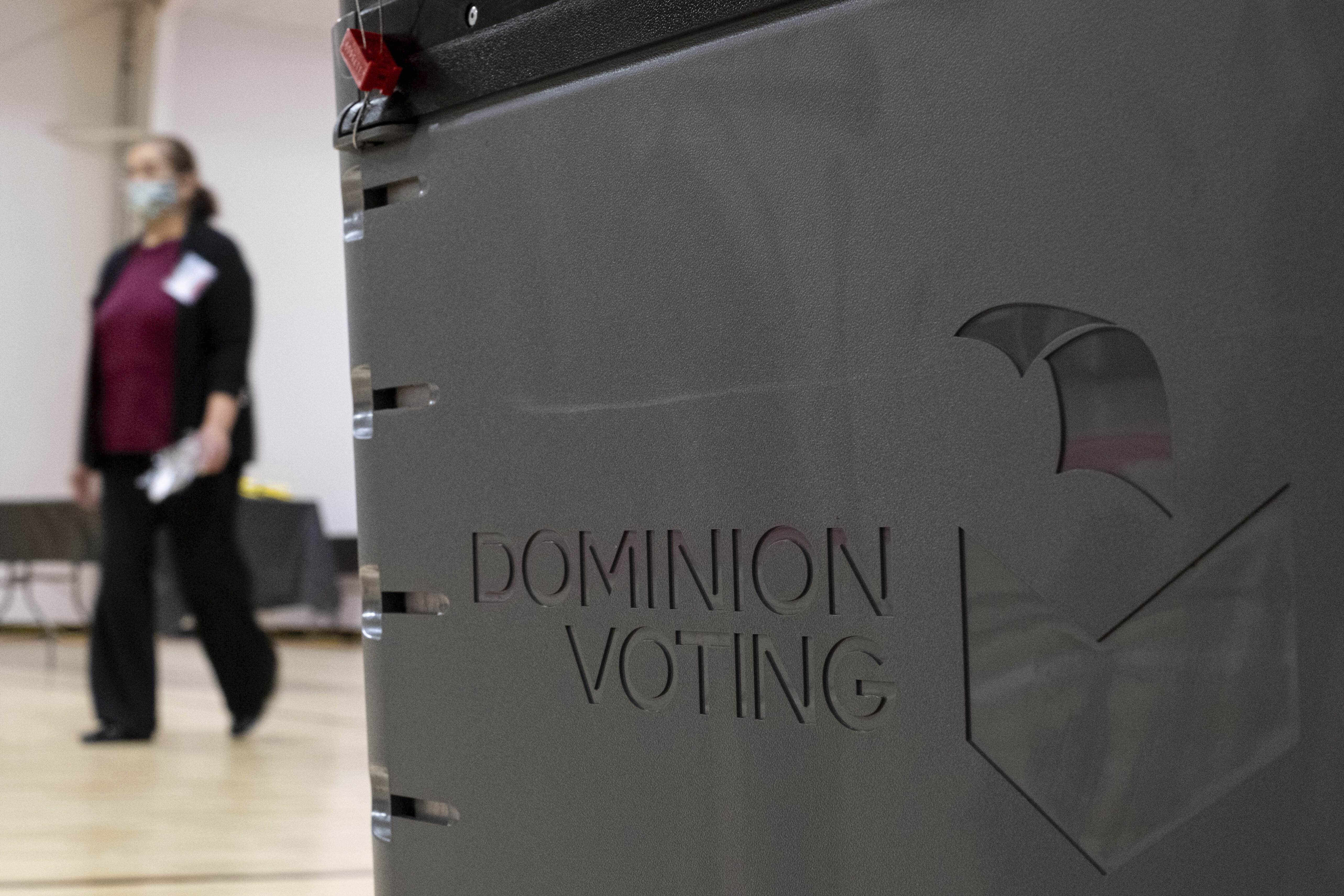 The far-right media outlet Newsmax, which amplified former President Donald Trump’s false allegations of election rigging and widespread voter fraud, said on Friday there is no evidence that Dominion Voting Systems and one of its top employees, Eric Coomer, manipulated election results in 2020.

“Newsmax subsequently found no evidence that such allegations were true. Many of the states whose results were contested by the Trump campaign after the November 2020 election have conducted extensive recounts and audits, and each of these states certified the results as legal and final,” the company said in a statement published online that will also be broadcast.

Coomer filed a defamation lawsuit against Newsmax in Colorado state court on Dec. 22. He withdrew that suit earlier Friday, ahead of Newmax’s apology. Coomer’s attorneys said he has reached a financial settlement, but terms of the arrangement were not disclosed.

A worker passes a Dominion Voting Systems ballot scanner during Georgia’s runoff Senate elections in January in Gwinnett County outside Atlanta. Former President Donald Trump and his allies spread falsehoods about the company’s role in the 2020 election, leading to a slew of defamation lawsuits.
CREDIT: Ben Gray/AP

Shortly after the election, Coomer became the subject of conspiracy theories that he had used his position at Dominion to manipulate votes for President Biden. He strongly denies those allegations. Coomer has been living in hiding for nearly six months after facing death threats. While he has dropped his suit against Newsmax, Coomer is still suing the Trump campaign and a number of campaign surrogates and pro-Trump media outlets, alleging defamation.

Coomer said pro-Trump cable news networks such as One America News and Newsmax crossed a legal line by amplifying and appearing to endorse obvious falsehoods about him and his employer. Coomer is the director of product strategy and security for Dominion Voting Systems. The company provides election equipment to 28 states, including swing states such as Georgia where Trump focused much of his post-election ire.

While there’s no evidence of widespread voter fraud, millions of Americans believe Biden did not legitimately win the presidential election.

Coomer said these false allegations elevated him to the national spotlight, destroyed his privacy and “fundamentally defamed his reputation across the country.”

In its retraction, Newsmax apologized for any harm its reporting of the allegations caused Coomer and his family.

Dominion and another election technology company, Smartmatic, have also filed defamation lawsuits against Trump allies and pro-Trump media companies, with more likely to come. (Smartmatic’s only U.S. customer was Los Angeles County.) Election companies are using billion-dollar defamation lawsuits to fight false claims they were involved in stealing the 2020 election. The companies have said the flood of disinformation about the election has hurt their bottom line.

According to a CNN poll released Friday, 70% of Republicans say they do not think Biden won enough votes to be president. However, the number of Republicans who believe there is solid evidence of fraud dropped 8 points to 50%.

Republican lawmakers across the country have pushed for new laws that could make voting more difficult for millions of Americans premised on the unsubstantiated belief of widespread cheating in the presidential election.

There are indications the many defamation suits are starting to have an effect. In February, an anchor for Newsmax walked out on a live interview with the MyPillow CEO Mike Lindell when he started making false claims about Dominion voting machines.

But other media companies have pledged to fight the lawsuits in court. Fox News has filed a motion to dismiss the Smartmatic lawsuit, calling it “meritless” and a “legal shakedown designed to chill speech and punish reporting.”

In a written statement in response to a defamation suit from Dominion, Fox News said it is proud of the network’s 2020 election coverage, which it said “stands in the highest tradition of American journalism” and said it would contest the “baseless” legal challenge.