Four astronauts who’ve spent the past six months aboard the International Space Station as part of the first operational mission of SpaceX’s Crew Dragon capsule are back on Earth after splashing down safely on Saturday in the Gulf of Mexico.

The capsule, nicknamed Resilience, undocked from the space station at 8:35 p.m ET, taking a 6 1/2-hour journey to its splashdown just before 3:00 a.m. ET. The astronauts are the first U.S. crew to make a nighttime splashdown since 1968, during the Apollo 8 mission to orbit the moon.

Mike Hopkins was joined on the mission by two other NASA astronauts — rookie Victor Glover and Shannon Walker, who previously flew aboard a Russian Soyuz spacecraft — and Japan’s Soichi Noguchi. Their spacecraft, Resilience, set a new record for the longest spaceflight by a U.S. space capsule that carried a crew, surpassing the 84 days set by an Apollo capsule on the final flight to Skylab in 1974. 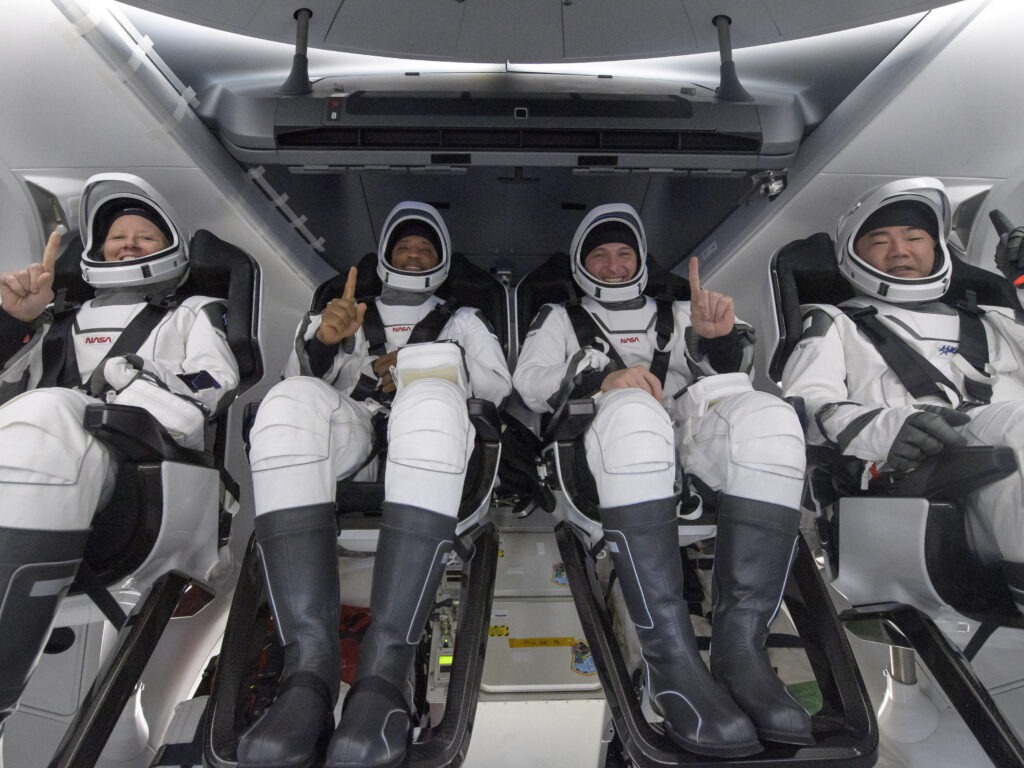 They topped the old record by nearly three months, unexpectedly tacking on a few more days this week after high winds in the Gulf delayed their originally planned April 28 return.

As Resilience — dangling below four orange and silver parachutes — touched down, there were no pleasure boats in sight. NASA had been hoping to avoid a repeat of the flotilla of curious onlookers that greeted the first crewed flight of Dragon in August, fearing that they could hamper the recovery effort and endanger themselves from the capsule’s noxious and potentially explosive fuel mixture.

During a news conference from the International Space Station on Monday, Hopkins encouraged the public to stay away from the capsule when it splashed down.

“I don’t think any of us are too worried in terms of landing on a boat,” the mission commander said. “But I think it’s the hypergolic, the fuel that’s used for the thrusters that we have.”

A few things on the ground have changed since Resilience lifted off from the Kennedy Space Center on Nov. 15 — for example, the crew returns to a new U.S. president. Some things have not changed — a pandemic continues to rage across the globe, but at least vaccines are now widely available in the United States. Within days of returning, the astronauts are set to receive their first COVID-19 vaccine shots.

“I know all of us were hoping that when we landed, or when we will land, that the pandemic would be at a different stage,” Walker said during Monday’s news briefing from orbit.

She said that upon their return, the astronauts will be in a “semi-quarantine” because weeks in space have caused their immune systems to be a “little bit depressed.”

“And so, we’re going to do everything we can do to keep everybody safe,” she said. “We definitely have enjoyed not wearing masks up here, and having to go back and wear masks, as well, it’s what we will do because that is the right thing to do.”

Asked what the mission’s highlight was, Noguchi, who has also flown on the now-retired space shuttle and the Russian Soyuz, said it was seeing the arrival of SpaceX Crew-2 on April 24.

“When the door opens and all four friends come into the space station, yeah, this is our community,” he said. “We had great camaraderie, and the dinner was great.”

For Glover, who had never been in space until November, it was the awe-inspiring view of Earth from space.

“The very first time I got out of the seat after Resilience was safely in orbit and I got a look out the window and saw the Earth from 250 miles up, I will never forget that moment,” he said. “It wasn’t about the view — it was how the view made me feel.”

“Earth is amazing. It’s beautiful. It protects us, so we should work hard to protect it,” Glover said.

The SpaceX Crew-2 mission, which lifted off on April 23, is made up of NASA astronauts Shane Kimbrough and Megan McArthur, as well as Akihiko Hoshide of Japan’s space agency and European Space Agency astronaut Thomas Pesquet. Aboard the International Space Station, they join NASA astronaut Mark Vande Hei and Russian cosmonauts Oleg Novitskiy and Pyotr Dubrov.