The first time salmon were released above Chief Joseph and, later, Grand Coulee dams, Hemene James watched elders from the Coeur d’Alene Tribe. Many weren’t even old enough to remember when salmon last swam in those waters.

In their faces he saw pure emotion, as salmon slipped into the waters where they hadn’t been since Grand Coulee Dam blocked their path in 1942.

Then, he looked at the children. Their excitement was infectious. They jumped and ran into the water, trying to catch the fish swimming upstream.

“It was a little, tiny glimpse of what our world used to be like in the days that the fish were here. So it was very moving and very encouraging,” James says. “This work gets monotonous at times and you feel like you’re spinning your wheels. But that was that glimmer of hope from the old ones that you guys are on the right path. Keep moving.”

Now a tribal council member, James remembers his grandfather telling stories of when they could still fish for salmon in the Upper Columbia.

At salmon camps, cousins and relatives would gather together, often only seeing each other at that time of year. Leaders from different bands would meet.

“They sang their songs and marriages were made, political deals were done, disagreements were fixed in these salmon camps,” James says. “And I think that that disconnect from those gatherings has done a lot, not only in intertribal relations, but it’s taken away each individual nation’s direct relationship with the land itself.”

Now, the Upper Columbia United Tribes are working together to prove salmon can be reintroduced – and can survive – in the waters above Grand Coulee. James says it’s something the tribes have always known.

“We can fix everything below (the blocked area). But it will never be what it could be until those fish are above those barriers,” James says.

First, researchers had to figure out if fish could survive once they were brought above Chief Joseph and Grand Coulee dams.

To do that, they looked at how much habitat was available to salmon, from Grand Coulee north to the Canadian border. They studied whether that tributary habitat was suitable. They considered all the risks to salmon and other fish that are blocked-in behind the dams. And, they modeled potential salmon lifecycles in the now-blocked area. Researchers also considered other options for fish to move around the two dams.

In all, the situation looked good to move onto the next phase of the project, which will include testing the feasibility study with live fish.

Casey Baldwin, a researcher with the Confederated Tribes of the Colville Reservation, says the habitat assessment was a critical piece to understand.

“The habitat assessment and the modeling work confirmed what we suspected, which was that there was a fair amount of available habitat in the blocked area,” Baldwin says.

In a recent study published in the journal Northwest Science, researchers at Pacific Northwest National Laboratory in Richland mapped areas that could make for good salmon spawning habitat. They found more than 47 miles of water from Kettle Falls, Washington, to the Canadian border could support a wide range of thousands of spawning salmon.

Depending on how far apart salmon spaced themselves, computer models showed the waters could make for good spawning habitat for 5,786 to 32,728 adult salmon.

To find good habitat for redds, or spawning areas for salmon, researchers look at riverbed gravel size – it can be about the size of a golf ball to a basketball, depending on a salmon’s size. They also study the direction and speed of the water, the water’s temperature and the slope of the riverbed.

The water can’t be too fast or too slow, which can “choke” eggs.

Researchers also studied a salmon’s life cycle beyond the blocked areas. They used models to predict what could happen to salmon populations when different management choices were made.

The researchers also needed to decide if reintroducing salmon could hurt the transplanted fish or other species that swim behind Chief Joseph and Grand Coulee. 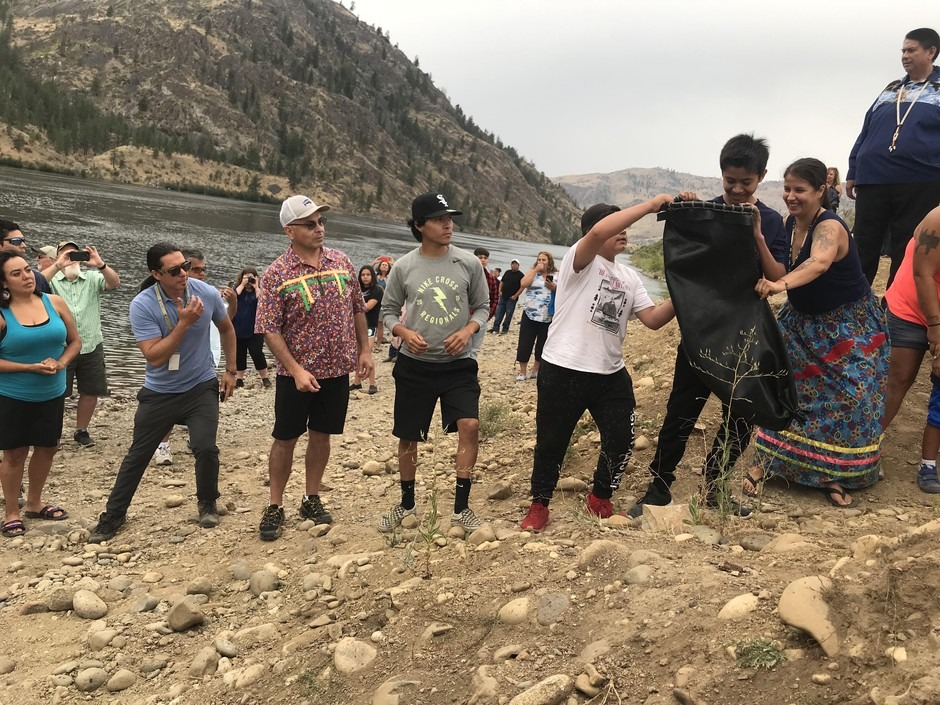 A chain of people representing multiple tribal nations from around the Northwest pass bags filled with salmon from a truck to the Columbia River at Chief Joseph Dam on Friday, Aug. 9, 2019. It was part of a study and early reintroduction effort in the Upper Columbia, which includes current-day reservations of the Spokane Tribe and Confederated Tribes of the Colville Reservation. CREDIT: Courtney Flatt/NWPB

In their risk assessment, the researchers concluded almost every known pathogen existed both below and above the blocked area. All but one strain of a particular virus, which can be harmful to rainbow trout.

During the initial releases in the next phase of the study – and with the cultural releases prior – they’ve screened fish for this strain of virus, which is known as infectious hematopoietic necrosis, or IHN.

Researchers aren’t moving steelhead from downstream of the dams. That should help prevent passing on the strain.

Baldwin says researchers also studied whether walleye, bass and northern pike in Lake Roosevelt would eat too many salmon.

“They definitely pose a risk to the success of the reintroduction. We have a pretty aggressive pike removal program going on. And (the Washington Department of Fish and Wildlife) has liberalized a lot of the bag limits on the other predators. We’ll be monitoring that as we move forward,” Baldwin says.

They also wouldn’t bring in fish stocks from areas farther downstream. If those fish strayed into the Okanogan, Methow or Wenatchee (rivers), they could outcompete fish native to those areas. That’s why researchers are using stocks from near the blocked areas.

Another piece of the puzzle is getting fish around the dams. For young fish heading out to sea, dropping over the top of Grand Coulee Dam would be a big fall. Heading through the turbines can give fish something akin to decompression sickness — aka “the bends” —  in divers.

One technique to help is called a floating surface collector, where fish will follow nets that guide them to an area where they can be trapped. Then they can be trucked around the dams or put into a slide or tube that will help them safely make their way around the dams.

As adult salmon return, researchers are exploring several options. Neither Chief Joseph nor Grand Coulee dams have a fish passage system. Salmon ladders would be “quite a stretch” for Grand Coulee Dam because of its height of 550 feet.

One solution could be what’s been dubbed the “salmon cannon” but is more officially called a Whooshh system. It’s a tube that glides salmon up and over structures that prevent fish passage.

Another option could be trucking salmon around dams.

This fall, researchers found salmon from an earlier small release spawning in the Sanpoil River after releasing fish upstream of Grand Coulee.

Hemene James says there is still another big challenge beyond this phased approach to reintroducing salmon. He says the federal federal government needs to hold up its end of the deal made with tribes.

“We ceded, between the tribes, hundreds of thousands of acres. With the understanding that we would be able to live the way that we always lived – or some form of that,” James says. “There isn’t an Indian Nation on this continent that isn’t asking for anything other than to be what we’ve always been.”

Bringing salmon back to the Upper Columbia has been a goal since the habitat was blocked by the Chief Joseph and Grand Coulee dams more than eight decades ago. Tribal members held a Ceremony of Tears 80 years ago when the final run of salmon returned. Continue Reading Some Good 2020 News: Salmon Spawning In Upper Columbia River After 80 Years