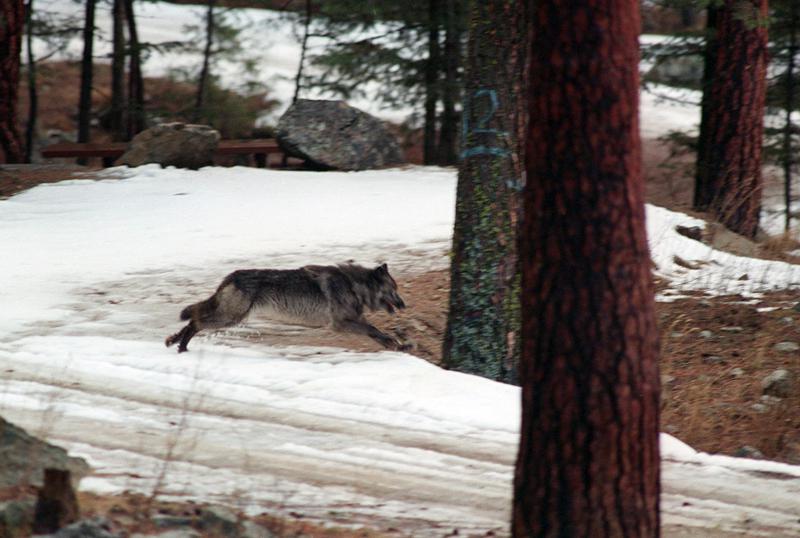 Idaho Gov. Brad Little has signed into law a measure that could lead to killing 90% of the state’s 1,500 wolves in a move that was backed by hunters and the state’s powerful ranching sector but heavily criticized by environmental advocates.

The Republican governor’s office posted Thursday that he signed the bill Wednesday. It had passed the Senate and House with enough votes to overcome a veto. Lawmakers who sponsored the measure said they want the state’s wolf population reduced to the allowed minimum of 150 to reduce attacks on livestock and to boost deer and elk herds.

The primary change allows the state to hire private contractors to kill wolves and provides more money for state officials to hire the contractors.

The law also expands the way wolves can be hunted and killed. Those methods include hunting, trapping and snaring an unlimited number of wolves on a single hunting tag, using night-vision equipment, chasing down wolves on snowmobiles and ATVs and shooting them from helicopters. Also under the new law, newborn pups can be killed if they are found on private land.

In this Jan. 14, 1995, file photo, a wolf leaps across a road into the wilds of central Idaho. On April 27, 2021, the Idaho House approved legislation allowing the state to hire private contractors and expand methods to kill wolves roaming Idaho, a measure that could cut the wolf population by 90%. CREDIT: Douglas Pizac/AP

“I think (the new law) will be very effective,” said Steve Alder of Idaho for Wildlife, a group that wants wolf populations reduced to boost elk numbers. “I really do think that they’ll finally get wolves down to the 150.”

He said the most effective new wolf hunting methods will be professional trappers sent into the state’s rugged wilderness areas and the use of aerial gunning from helicopters. Adler said most regular hunters never see wolves or kill them but will now have much better odds of doing so using night-vision equipment.

He recalled a winter camping trip when he said wolves were “all around us in the dark.”

“Had we had the ability to use night-vision, we could have harvested a lot of wolves,” Alder said.

Environmental groups decried the new law. Zoe Hanley of the Defenders of Wildlife group said in a statement that “today marks a low point for gray wolf recovery in the U.S.”

“For years Idaho wolves have been intensely persecuted through the nation’s most permissive hunting and trapping seasons, and this bill all but pushes the species back to the brink of federal relisting,” Hanley said.

Another group, the Center for Biological Diversity, has asked Interior Secretary Deb Haaland to cut off millions of dollars to Idaho that’s used to improve wildlife habitat and outdoor recreation opportunities because the group said the new law goes against enhancing wildlife.

“We’re disappointed that Gov. Little signed such a cruel and ill-conceived bill into law,” said Andrea Zaccardi, a senior attorney at the center.

The Idaho Fish and Game Commission also opposed the bill because it removes wildlife management decisions from the commission and its experts and gives them to politicians.

Idaho took over management of wolves from the federal government in 2011, and the commission has been liberalizing wolf hunting and trapping over the years. But they have been criticized for moving too slowly.

“Fish and Game had 10 years, and they dropped the ball,” Alder said. “They failed. People are mad at the Legislature (for the new law), but they had to do it. I think it was Fish and Game’s ideology against killing wolves that brought this about.”

The Idaho Cattle Association representing ranchers said it supports the measure because it allows the free-market system to play a role in killing wolves. Little’s family has a long history of sheep ranching in Idaho.

The Idaho Department of Fish and Game, using remote cameras and other methods, reported in February that the wolf population has held steady at about 1,500 over the last two years.

About 500 wolves have been killed in the state in each of the last two years by hunters, trappers and wolf-control measures carried out by state and federal authorities.

Idaho’s wolf conservation and management plan calls for at least 150 wolves in the state and 15 packs. Supporters of the new law say the state can increase the killing of wolves to reach that level.

According to the plan, if Idaho’s wolf population fell to 100, there is a possibility the U.S. Fish and Wildlife Service could resume the management of wolves in the state.