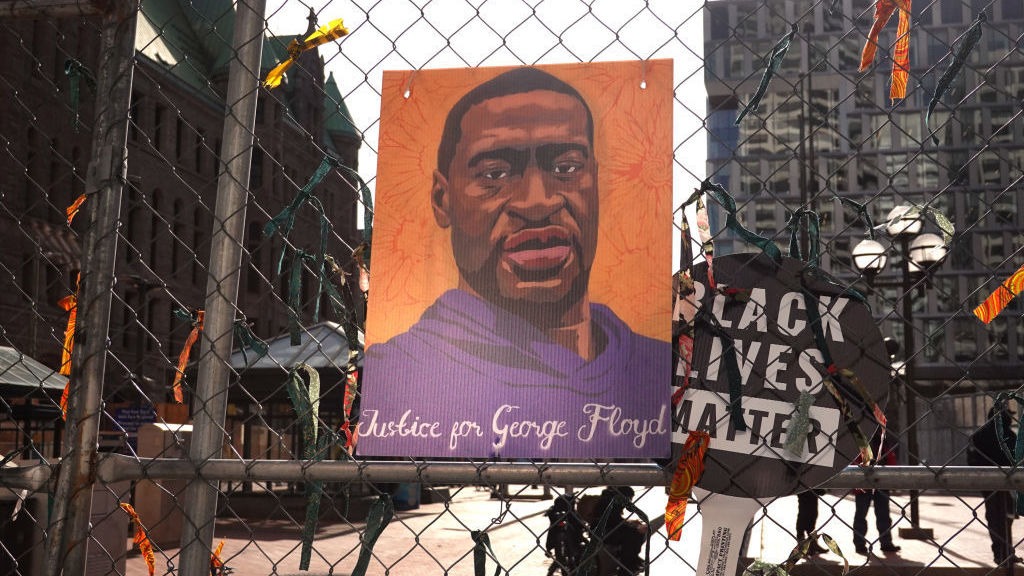 The Justice Department has filed federal criminal charges against Derek Chauvin, accusing the former police officer of using excessive force and violating the civil rights of George Floyd. Floyd died after Chauvin pressed on his neck for more than nine minutes on the pavement outside a convenience store last year in Minneapolis.

Three other former officers on the scene that day — Thomas Lane, J. Alexander Kueng and Tou Thao — have been charged federally in connection with Floyd’s death. Two of the men, Kueng and Thao, are accused of failing to intervene to stop Chauvin. All three face a charge of failing to provide medical care with “deliberate indifference” to Floyd’s suffering. They already are preparing for a state trial in August.

Chauvin also faces a separate federal indictment related to a 2017 incident where he allegedly used a neck restraint “without legal justification” on a 14-year-old and beat the teenager in the head with a flashlight.

A picture of George Floyd hangs on a fence barrier that surrounds the Hennepin County Government Center in Minneapolis during the trial of former police officer Derek Chauvin in March. The Justice Department is now bringing criminal charges against Chauvin over allegedly violating Floyd’s rights and using excessive force in restraining him. CREDIT: Scott Olson/Getty Images

Federal civil rights prosecutors from Washington worked hand in hand with the U.S. Attorney’s Office in Minnesota to build the case.

Such federal charges are rare, in part because it is difficult to meet the high legal bar they require. To succeed, prosecutors must prove beyond a reasonable doubt that Chauvin acted “willfully” to deprive Floyd of his civil rights and used force that was “constitutionally unreasonable.”

In those cases, officers can argue in their defense that they acted out of fear, panic or even poor judgment, some of which featured in Chauvin’s defense to state charges in a trial that concluded with a conviction on all counts last month. Chauvin has moved for a new trial, citing alleged jury misconduct and pretrial publicity.

The video of Floyd, who was Black, pleading for his life and crying for his late mother reverberated around the globe, with people who watched it taking to the streets in the summer of 2020 to protest police brutality and racial injustice. Floyd’s young daughter met President Biden on the campaign trial, and he often repeats her statement that her “daddy changed the world.”

The case is yet another demonstration of the Biden administration’s emphasis on civil rights. In the Trump administration, Attorney General Bill Barr declined to approve a plea deal with Chauvin after Floyd’s death, reasoning that he preferred to cede that ground to local authorities and that the situation in Minneapolis was incendiary enough.

But the U.S. Justice Department has weighed in with federal charges in other cases, including the brutal police beating of Rodney King in California in 1991; the murder of nine Black parishioners during a Bible study at a historic church in Charleston, S.C., in 2015; and the death of a young woman protesting against hate groups in a vehicular assault in Charlottesville, Va., in 2017.

The current attorney general, Merrick Garland, told ABC News he was “shocked” by the video of Floyd’s death and saddened by the persistence of racial discrimination in housing, education and the justice system.

The new federal criminal cases are separate from an ongoing civil rights investigation Garland announced April 21 that will examine whether Minneapolis police have engaged in a “pattern or practice” of discrimination, including excessive force and mistreatment of people with disabilities. Authorities in Minnesota have pledged to cooperate with that civil investigation, which could take months to pursue.

Minnesota Attorney General Keith Ellison welcomed the new federal criminal charges. “The federal government has a responsibility to protect the civil rights of every American and to pursue justice to the fullest extent of federal law,” Ellison said. “Federal prosecution for the violation of George Floyd’s civil rights is entirely appropriate.”

NAACP President and CEO Derrick Johnson said the charges are a “step in the right direction” but that “urgent reforms” are needed. The NAACP has been working with a bipartisan group of lawmakers on a bill named after Floyd that would create a national registry of police misconduct, among other things.

“No police officer is above the law, nor should they ever be shielded from accountability,” Johnson said.