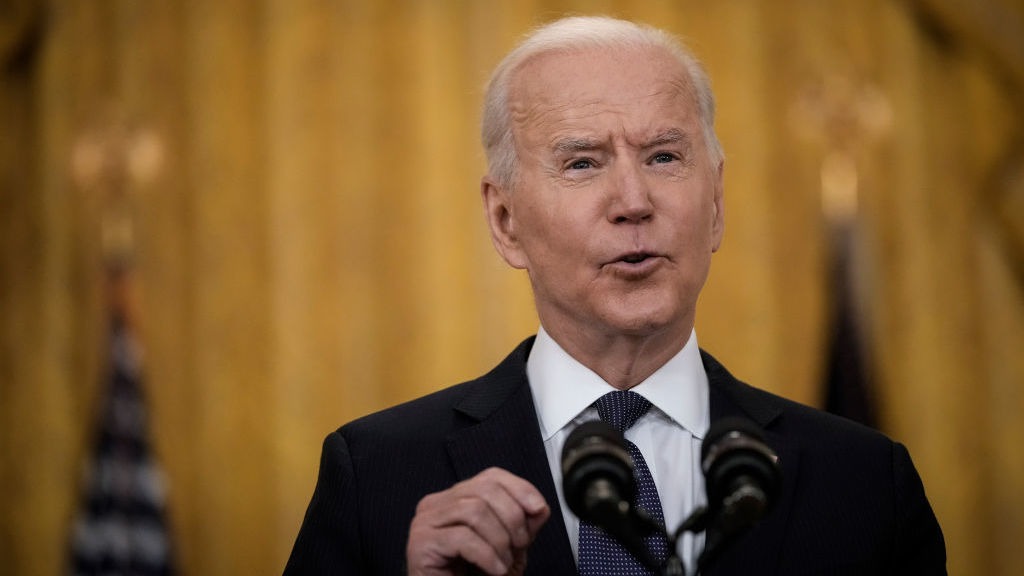 Americans Will Lose Unemployment Benefits If They Turn Down Jobs, Biden Says

“We’re going to make it clear that anyone collecting unemployment, who was offered a suitable job, must take the job or lose their unemployment benefits,” Biden said before adding: “We don’t see much evidence of that.”

The president’s remarks come just days after the latest jobs report showed fewer jobs created than expected: 260,000 vs. about 1 million. Some employers say that they’re finding it difficult to find workers, and Republican critics argue that’s because of the checks Americans are receiving from the coronavirus stimulus package.

President Biden delivers remarks on the economy Monday in the East Room of the White House, pushing back on critics who say the American Rescue Plan is making the economy worse. CREDIT: Drew Angerer/Getty Images

“Let’s be clear: Our economic plan is working. I never said — and no serious analyst ever suggested — that climbing out of the deep, deep hole our economy is in would be simple, easy, immediate or perfectly studied,” Biden said. “Some months will exceed expectations; others will fall short.”

Republicans, who uniformly opposed the historic $1.9 trillion recovery package, seized on the jobs report as evidence that Biden’s policies were directly harming U.S. businesses and slowing the nation’s economic recovery from the virus.

“This is a stunning economic setback,” Rep. Kevin Brady, R-Texas, wrote in a Friday tweet after the report came out. “Unequivocal proof that President Biden is sabotaging our jobs recovery with promises of higher taxes & regulation on local businesses that discourage hiring, drive jobs overseas.”

Brady leads the minority vote on the powerful House Ways and Means Committee. The Twitter page for Republicans on the committee wrote on Friday: “U.S. job growth for the month of April fell far below what experts had predicted.

“Democrats are paying 4 in 10 jobless more to stay home than to return to work.”

In his Monday remarks to reporters, Biden pushed back on the suggestion that funds from the progressive relief package were being abused in any meaningful way and encouraged employers to offer competitive wages to court Americans back into the workforce.

“My expectation is that as the economy comes back, these companies will provide fair wages and safe work environments, and if they do, they’ll find plenty of workers. And we’re all going to come out of this together and better than before,” he said.

“No one should be allowed to game the system.”

Biden said that while he took allegations of fraud seriously, the government could not “turn our backs” on those who had lost jobs as a result of the pandemic. He placed the blame for the sluggish state of the national economy on his predecessor, former President Donald Trump, who Biden said “bungled” his handling of the virus and its fallout.

“We’ll insist that the law is followed with respect to benefits. But we’re not going to turn our backs on our fellow Americans. Twenty-two million people lost their jobs in this pandemic through no fault of their own. They lost their jobs to a virus, and to a government that bungled its response to the crisis and failed to protect them,” Biden said.