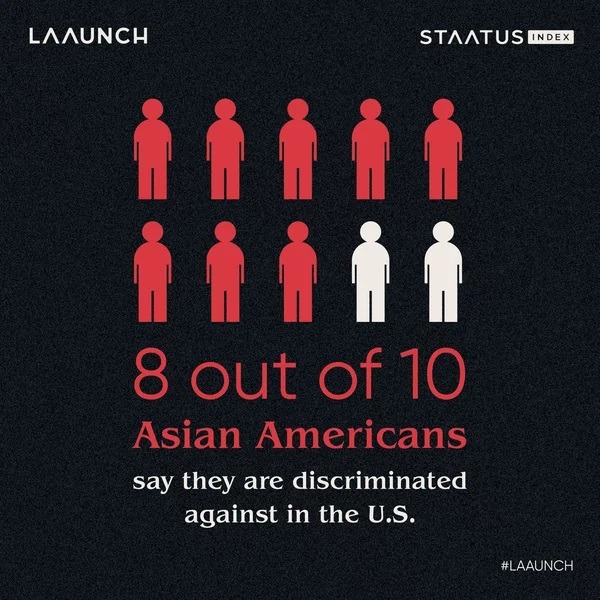 PROGRAMMING NOTE: NWPB is joining with KUOW, Spokane Public Radio and Humanities Washington to bring a series of special shows and stories highlighting Asian American experiences in the Northwest. To share yours, send an email to NWPB here with subject line “My Northwest AAPI experience”

A recent survey found that nearly 80% of Asian Americans don’t feel respected and say they are discriminated against by their fellow Americans. Additionally, a significant portion of respondents of multiple races said they were unaware of an increase in hate crimes and racism against Asian Americans over the past year.

The survey, commissioned by the new nonprofit Leading Asian Americans to Unite for Change (LAAUNCH), was based on responses from 2,766 U.S. residents between March 29 and April 14.

Other results found 90% of Black Americans and 73% of Hispanic/Latino Americans say they are discriminated against in the U.S.

A recent study indicates that approximately 80% of Asian Americans feel a lack of respect and a sense of discrimination from fellow Americans.
CREDIT: LAAUNCH

Hate crimes against Asian Americans, ranging from verbal abuse to violent attacks, increased in several cities in 2020 from 2019. And six Asian American women were killed on March 16 in spa shootings in Atlanta.

“We thought maybe some people were unaware, but after the Atlanta attacks, everyone should be aware,” LAAUNCH CEO Norman Chen tells NPR.

Chen says he was caught off guard by one answer: 42% of respondents couldn’t name a prominent Asian American.

The survey also asked about how people perceive Asian Americans in television and movies.

“Most Asian Americans are still in stereotypical roles — waiters, sex workers, kung fu guys — the roles are always one dimensional and stereotypical,” Chen says. “Our data just really reinforced the opportunity for us to create well-rounded, prominent characters in movies and TV.”

Chen says this is the first survey of American sentiments regarding Asian Americans in 20 years. The organization plans to conduct the survey every year to track progress of attitudes toward Asian Americans.