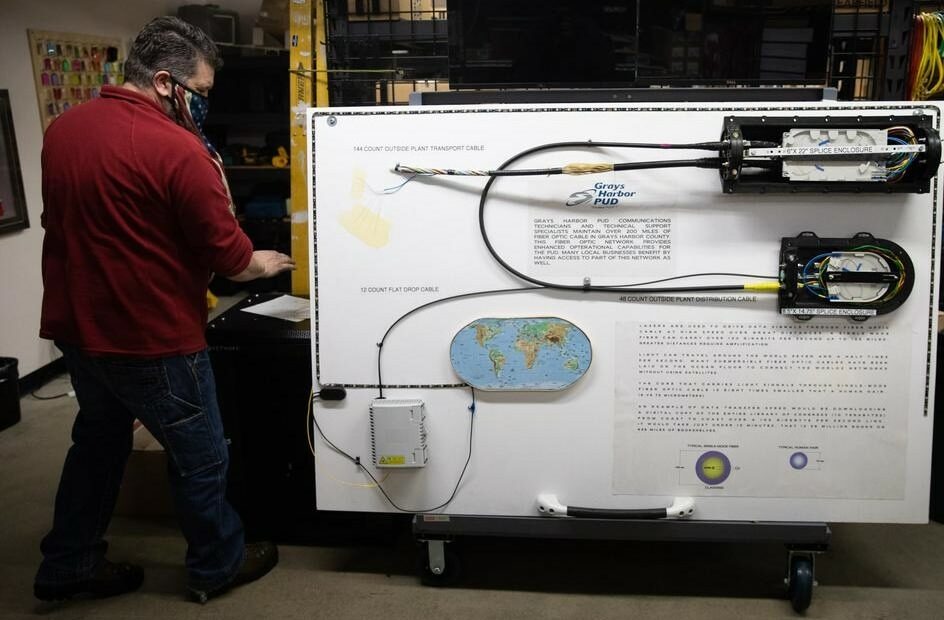 Originally published May 17, 2021 on Crosscut.com

Washington state went all in on expanding public broadband this year. So much so, that the Legislature passed two different bills aimed at extending high-speed internet to people in rural areas.

It’s possible, however, that two bills aren’t better than one. And they may partly cancel each other out.

Now that Gov. Jay Inslee has signed both measures into law, confusion is mounting about whether the two laws can co-exist.

And that debate may end up in court. 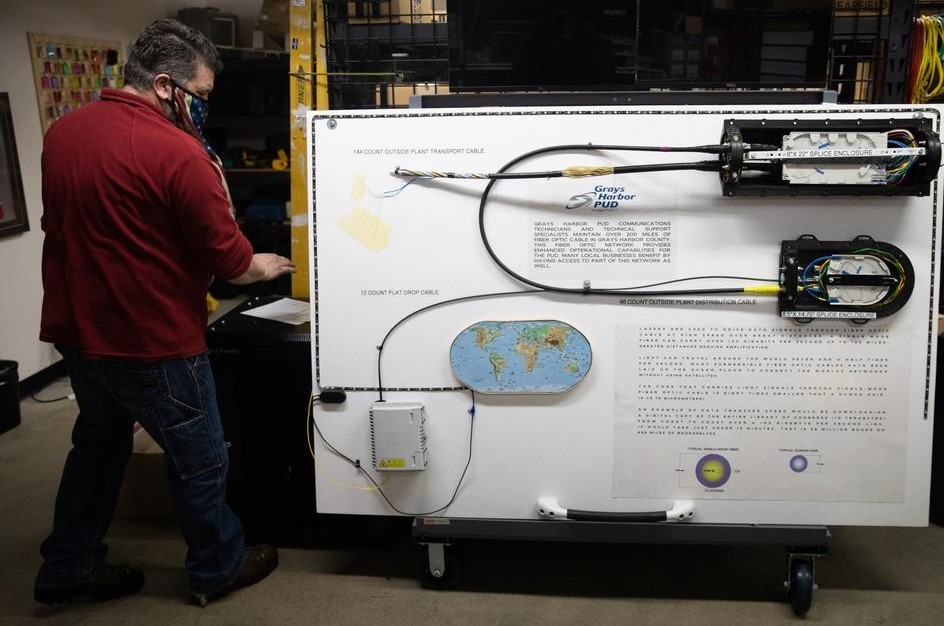 Michael Moore, an information technology construction coordinator, is seen with an explanatory board about telecommunications services at a co-location data center inside Grays Harbor Pubic Utility District’s headquarters in Aberdeen on March 4, 2021. Two bills approved by Washington’s Legislature would let public utility districts offer broadband to retail customers. But there’s some confusion about how the bills would interact. CREDIT: Matt M. McKnight/Crosscut

Both House Bill 1336 and Senate Bill 5383 give public utility districts and ports new authority to offer broadband internet. The idea behind both bills is to have those public entities offer broadband in remote areas where private companies don’t operate because it’s not cost effective.

But the authority granted under HB 1336 is broader, said state Sen, Lisa Wellman, D-Mercer Island. Rather than requiring PUDs and ports to focus on offering broadband to people who lack any internet service, the House bill allows the public entities to serve all customers, including people who can already access the internet through a private company, such as CenturyLink or Comcast.

Wellman said she thinks those parts of the bills conflict with one another. Rep. Drew Hansen, the sponsor of the House measure, disagreed, saying the Legislature approved last-minute amendments so the bills can work together.

Inslee’s office hasn’t done much to clarify matters. In an unusual move on Thursday, the governor signed both bills at the same time, one with his right hand and the other with his left. While most bill signings occur in public and are broadcast on video, Inslee signed these two bills off camera. His office didn’t explain why.

If the bills do conflict with one another, the order in which they were signed into law becomes of paramount importance. In theory, the last bill signed would take precedence over the other. If it was Hansen’s bill, Wellman said she believes her bill’s focus on expanding public broadband in remote, unserved areas would be stripped out.

“It’s such drama, I’m telling you,” said Wellman, the sponsor of SB 5383. “I’ve never been in this situation before and I don’t want to ever be again.”

The Office of the Secretary of State, which assigns numbers to bills based on the order in which they were signed into law, plans to ask a judge for guidance on what to do in this circumstance. Kylee Zabel, a spokesperson for the office, said they have never experienced a situation where a governor signed two bills into law at the same time.

“We are planning to seek clarification from Thurston County Superior Court on how to proceed, as this is unchartered territory,” Zabel wrote in an email Friday.

Mike Faulk, a spokesperson for Inslee, wrote in an email that the governor’s legal counsel didn’t think the bills were in conflict.

Even so, he wrote, both Wellman and Hansen “made compelling and passionate arguments to the governor for signing their bill first.”

Because of that, “it seemed only fair to sign them at the same time,” Faulk wrote.

The Washington State Broadband Office is set to distribute hundreds of millions of dollars in state and federal money to expand broadband internet access across the state. Under either of the bills that passed the Legislature, public utility districts and ports would be in a better position to take advantage of that influx of new money.

Russ Elliott, the director of the broadband office, said he originally preferred the approach laid out under Wellman’s bill, focusing on specific areas that lacked access to high-speed internet. At this point, though, he said he’s happy with either measure, and just excited to start getting more people online.

He said the pandemic has highlighted the acute need for reliable internet, as well as the serious consequences for those who lack it. Those disadvantages include not being able to participate in remote work or online schooling, as well as an inability to access telemedicine services during a public health crisis.

However, the dispute over how the two bills interact could complicate public utility districts’ plans to jump into the retail broadband business, he said.

“I think there are a lot of people right now worried whether, if someone implements something in the vein of this legislation, are they subjecting themselves to some sort of a legal battle?” Elliott said Friday. “Unfortunately that may be the way this gets played out — someone challenges what happens under these bills. I would hate to see that.”

The Secretary of State’s Office said it is still figuring out exactly how it will petition the county court to weigh in — remember, the office has never run into this sort of thing before.

The court’s response may dictate what happens next with the bills.