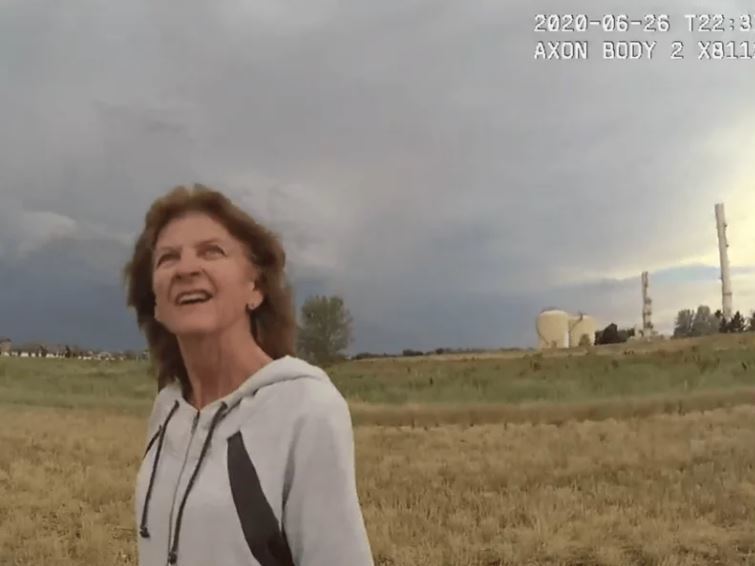 Multiple charges have been filed against two former Colorado police officers for their roles in the arrest of a 73-year-old woman with dementia last year.

The charges were filed on Wednesday against former Loveland Police Department officers Austin Hopp and Daria Jalali, who arrested and booked Karen Garner as she was walking home from a local Walmart after failing to pay for about $14 worth of merchandise.

“I was able to review dozens of witnesses, interviews, scores of records, phone calls, reports, and photographs, hours of audio and video, and a host of additional evidence, which led me to the decisions I’m making here today,” Gordon McLaughlin, district attorney for the Eighth Judicial District of Colorado said during a news conference, Colorado Public Radio reported.

Karen Garner was arrested on June 26, 2020 after officials say she tried to shoplift about $14 worth of merchandise from a local Walmart in Loveland, Colo.
Screengrab courtesy of attorney Sarah Shielke, Life and Liberty Law Office

Hopp, who handcuffed Garner and allegedly dislocated her shoulder in the process, is charged with two felonies — assault in the second degree causing a serious bodily injury to an at-risk victim and attempting to influence a public servant — and a misdemeanor charge for official misconduct. Jalali faces three misdemeanor charges, including failure to report excessive use of force, failure to intervene in a use of excessive force, and official misconduct.

A federal civil rights lawsuit filed by Garner’s family last month says Garner wandered out of the Loveland Walmart on June 26, 2020, carrying “a Pepsi, a candy bar, a t-shirt, and some Shout Wipe refills.” Her lawyers say the woman had forgotten to pay for the items and that when she offered to pay the $13.88 bill, employees refused to let her. Instead, surveillance camera footage shows that an employee tried to keep her at the store while they waited for law enforcement.

According to Hopp’s incident report, Garner gave Walmart employees the slip as they tried to walk her to the store’s loss prevention office.

Body camera footage of the police altercation shows Hopp pulling onto the side of the road as Garner is walking home along an empty grass-covered field. Hopp approaches Garner identifying himself as a police officer and calling for her to stop.

“I don’t think you want to play it this way,” he says. “You just left Walmart. Do you need to be arrested right now?” Hopp asks.

Garner, whose lawyers say stands at 5 foot and weighs 80 pounds, appears confused by the officers’ commands and says she is going home before turning away from Hopp. She is holding a cell phone and a small bouquet of wildflowers picked from the side of the road in her left hand. As her back is turned to him, Hopp reaches for her left hand, pulls it behind her back and pins her to the ground. Garner looks terrified, repeatedly stating, “I’m going home.” She tries to push herself up but Hopp forces her back down and cuffs her left hand. 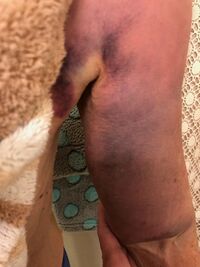 A close up photo of the back of Karen Garner’s arm showing the injuries she allegedly sustained during the arrest on June 26, 2020.
Courtesy of attorney Sarah Shielke, Life and Liberty Law Office

Out of breath, Hopp calls the incident in. “After a short struggle she is now detained,” he says.

Garner is later seen standing with her chest against Hopp’s squad car as Hopp continues to hold her left arm behind her back. Jalali, who had only just arrived, according to the incident report, walks over and also takes hold of Garner’s arm. “Wait,” Jalali shouts as she raises Garner’s elbow.

In one version of the video with enhanced audio created by Garner’s attorneys, a loud cracking can be heard as Hopp and Jalali appear to push Garner’s elbow upward. Garner’s lawyer, Sarah Schielke, says that is the sound of her shoulder being dislocated.

Garner’s body begins to slide down the hood and Hopp accuses her of refusing to hold her own weight. He then puts her back on the ground.

The two officers eventually transport Garner to the station and where she is booked. According to court documents, she remained handcuffed to a bench in a cell for six hours before receiving any medical attention, despite numerous complaints by Garner that both her shoulder and wrist were in pain.

In the end, the district attorney’s office dropped all charges against Garner.

Scheilke’s lawsuit states that in addition to dementia, Garner also suffers from sensory aphasia, which causes her difficulty in communicating and understanding others.

“This is a start, but it is not enough,” Shielke said in response to the charges.

“These officers did not do this in a vacuum,” she said. “Multiple individuals at the Loveland police department watched what Hopp and Jalali did.”

Schielke has noted that the department failed to take any action against the officer until media reports publicized Garner’s violent arrest despite the fact that several other officers as well as supervisors were aware of what had happened. Only then did officials seek to launch an investigation into the incident resulting in Wednesday’s charges, she said.

“ALL of those individuals did nothing about it. That is not a Hopp-and-Jalali-being-rogue-criminals problem. That’s a City of Loveland creating them problem,” Schielke stated.

During a press conference on Wednesday afternoon, Loveland Police Chief Robert Ticer suggested there is not a widespread culture of abuse within the department. He said he “fully supports” the charges against the two former officers.

“Their actions and attitudes are in direct contrast to the culture we strive to achieve here at the Loveland Police Department.”

Ticer added that once the department became aware of the severity of Garner’s injuries on April 14, officials acted swiftly. That included enforcing a mandatory Alzheimer’s training for all officers within the department.