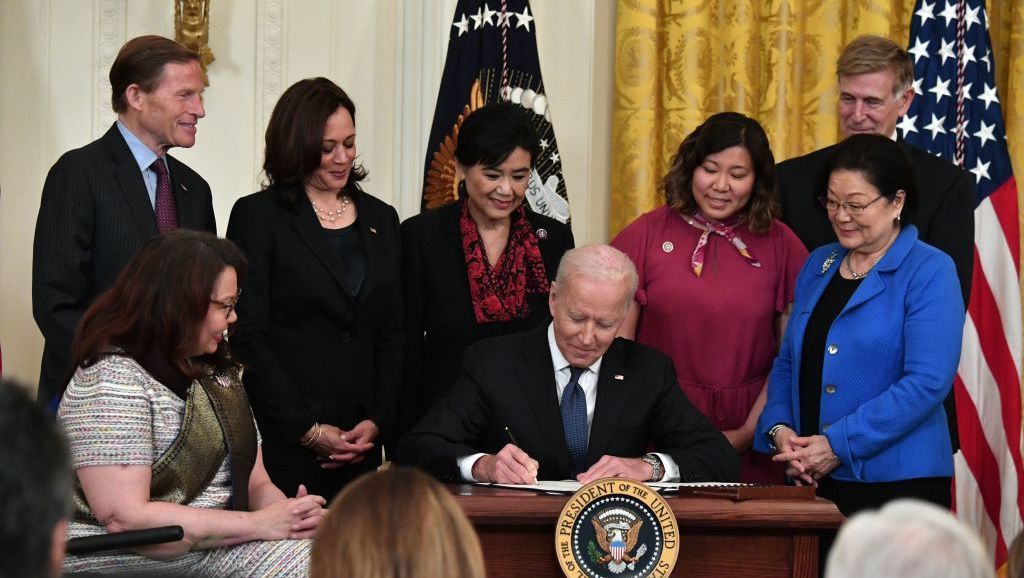 Following overwhelming support from both chambers of Congress, President Biden signed legislation Thursday that addresses hate crimes throughout the COVID-19 pandemic, with particular emphasis on the increase in violence against Asian Americans.

At an event in the East Room of the White House, Biden thanked lawmakers for coming together to pass the legislation. He said standing against hatred and racism, which he called “the ugly poison that has long haunted and plagued our nation,” is what brings Americans together.

“My message to all of those who are hurting is: We see you and the Congress has said, we see you. And we are committed to stop the hatred and the bias,” he said.

President Biden signs into law the COVID-19 Hate Crimes Act on Thursday in the East Room of the White House. CREDIT: Nicholas Kamm/AFP via Getty Images

The legislation, introduced by Rep. Grace Meng, D-N.Y., and Sen. Mazie Hirono, D-Hawaii, aims to make the reporting of hate crimes more accessible at the local and state levels by boosting public outreach and ensuring reporting resources are available online in multiple languages.

It also directs the Department of Justice to designate a point person to expedite the review of hate crimes related to COVID-19 and authorizes grants to state and local governments to conduct crime-reduction programs to prevent and respond to hate crimes.

Vice President Harris introduced Biden ahead of the signing and reflected on the increase in violence against Asian Americans.

Harris noted the work to combat racism doesn’t end with the signing of the bill.

“Here’s the truth: Racism exists in America. Xenophobia exists in America, antisemitism, Islamophobia, homophobia, transphobia — it all exists. And so the work to address injustice wherever it exists remains the work ahead,” she said.

The signing comes two days after the House of Representatives passed the COVID-19 Hate Crimes Act by a vote of 364-62; all 62 votes against the bill were from Republicans. The Senate approved the legislation last month, with near-unanimous support; Missouri Republican Josh Hawley was the sole senator to vote against the bill.

Senate Minority Leader Mitch McConnell, R-Ky., attended Thursday’s ceremony along with a number of Democrats, advocates, families of victims of hate crimes and others. Sen. Susan Collins, R-Maine, who helped co-author a key provision that paved the way for the bill’s passage, was also in attendance.

Asian Americans have faced a dramatic spike in violence throughout the pandemic. The organization Stop AAPI Hate documented 6,603 hate incidents from March 2020 to March 2021, and leaders said the true number is much higher as many hate crimes go unreported. Democrats have pointed to former President Donald Trump’s frequent use of racist phrases such as “kung flu” to describe the coronavirus as a link to the increase in anti-Asian sentiment in the country.

Stop AAPI Hate praised the legislation for investing in “community-centered solutions and provisions to mitigate anti-Asian rhetoric” but said further legislation is needed to address the “root causes of systemic racism and oppression.”

“Because the Act centers criminal law enforcement agencies in its solutions, it will not address the overwhelming majority of incidents reported to our site which are not hate crimes, but serious hate incidents,” the coalition said in a statement after the House passage.

Attorney General Merrick Garland called the bill signing an “important step toward protecting everyone in our country from acts of hate and intolerance.”

“The Department of Justice is proud to play a central role in implementing this legislation,” he said in a statement following the signing. “Investigating and prosecuting hate crimes is a top priority, deeply rooted in the department’s founding. We will use the new law to enhance the aggressive measures we are taking to combat crime motivated by bigotry and discrimination.”