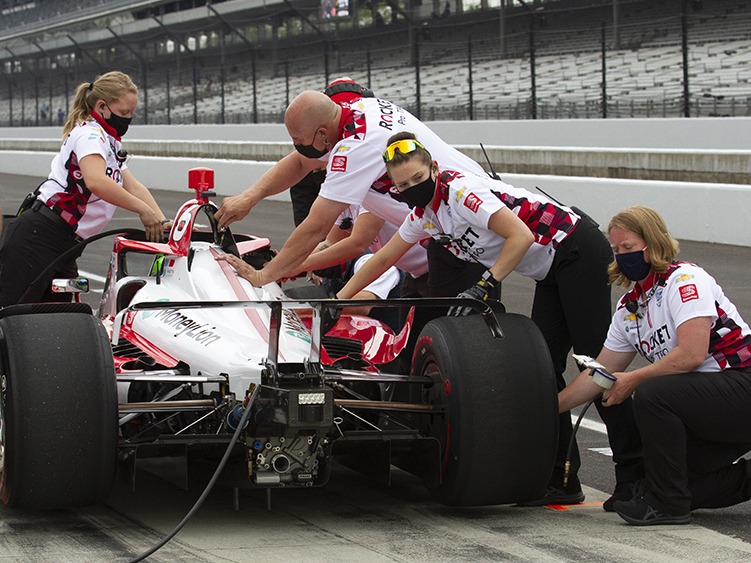 The 105th Indianapolis 500 is about to run — and this year’s race could mark a first. Over the years, only nine women have driven in the marquee event. But this time, one of 35 teams competing to qualify is made up mostly of women, including the driver, owner and crew.

As cars zip by at over 200 miles per hour at the Indianapolis Motor Speedway on the first day of practice Tuesday, the No. 16 car pulls into the pit lane and crew member Caitlyn Brown climbs over the wall to service the inside front tire.

She’s one of the women on team Paretta Autosport — about 70% of its members are women. Brown is excited to be in the public’s eye.

“It’s definitely something that it’s still hard to wrap my head around right now,” she says. “Because you don’t really understand the impact you’re making until it’s over. So it’s just incredible to be able to have the opportunity. And I can’t imagine what it’s gonna feel like come race day.”

Paretta Autosport crew members work on their car in pit lane at the Indianapolis Motor Speedway during a practice session earlier this week. It could become the first majority-women team to qualify for the Indy 500. CREDIT: Doug Jaggers/WFYI

For the first time in Indianapolis 500 history, a majority-women’s team is aiming to compete in the “Greatest Spectacle in Racing,” as it’s known.

The Paretta team, which was announced earlier this year, is a part of a broader effort to bring more diversity to motor sports.

Team owner Beth Paretta says that if it qualifies, it will be making history and she’s quick to note the women who got them here.

“We stand on their shoulders,” Paretta says. “There have been women that have been mechanics that had to hide the fact that they were women, had to wear bandanas over their hair so that … people wouldn’t be heckling them.”

The Paretta team is a part of track owner Roger Penske’s Race for Equality and Change initiative that launched last summer. It provides guidance from Team Penske and shares employees like Brown.

Jimmie McMillian, Penske Entertainment Corp.’s chief diversity officer, says it’s one of many initiatives being made to make the speedway more diverse and inclusive.

Driver Simona de Silvestro, who last ran the Indy 500 in 2015, is excited to return to compete as part of the Paretta team.

“When [we’re] on pit lane, you know, I think all the other teams kind of look at us. But you know, we just do our job and that’s what it is,” de Silvestro says. “And hopefully, I think if somebody is good at what they do, they should also get the shot at it.” 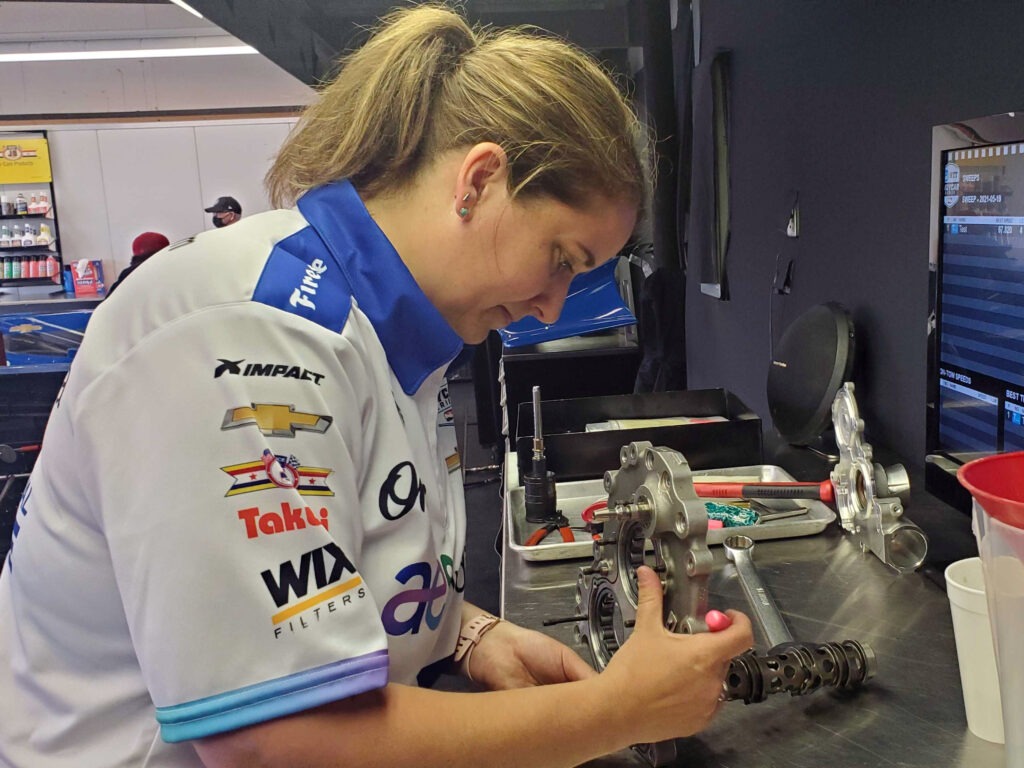 Mechanic Anna Chatten works on a spare gearbox for her team, Dreyer & Reinbold. “If you would have asked me 20 years ago if I thought I would still be a solo wrench turner in the IndyCar paddock, I would have thought you were crazy,” she says.
CREDIT: Samantha Horton/IPB News

Anna Chatten is a gearbox mechanic for Dreyer & Reinbold, another team competing at this year’s race. Chatten has worked in motor sports for over 20 years and is one of a few women to be on an Indy 500 pit crew. She says she’s surprised that more women aren’t in the sport.

“If you would have asked me 20 years ago if I thought I would still be a solo wrench turner in the IndyCar paddock, I would have thought you were crazy,” Chatten says. “I don’t know why there isn’t more.”

For owner Beth Paretta, getting more women into the sport is just a first step. She wants to see more diversity on all the racing teams.

“Racing is the only sport today that can be coed at the pro level and I think that’s a really amazing comment,” Paretta says. “Because if you look at everywhere else — business, industry, science sectors — life is coed.”

Her team is making its debut at what is considered the Super Bowl of racing. She likes the attention it draws and hopes that having more women in different roles might inspire future generations to get involved in motor sports.

“The best thing for me is if there is a young girl watching at home, and she sees herself,” Paretta says. “That’s all we want to do. And maybe 10 years from now, she’ll be on pit lane.”

The Paretta team is competing this weekend for one of the 33 spots in the Indy 500, which runs May 30.