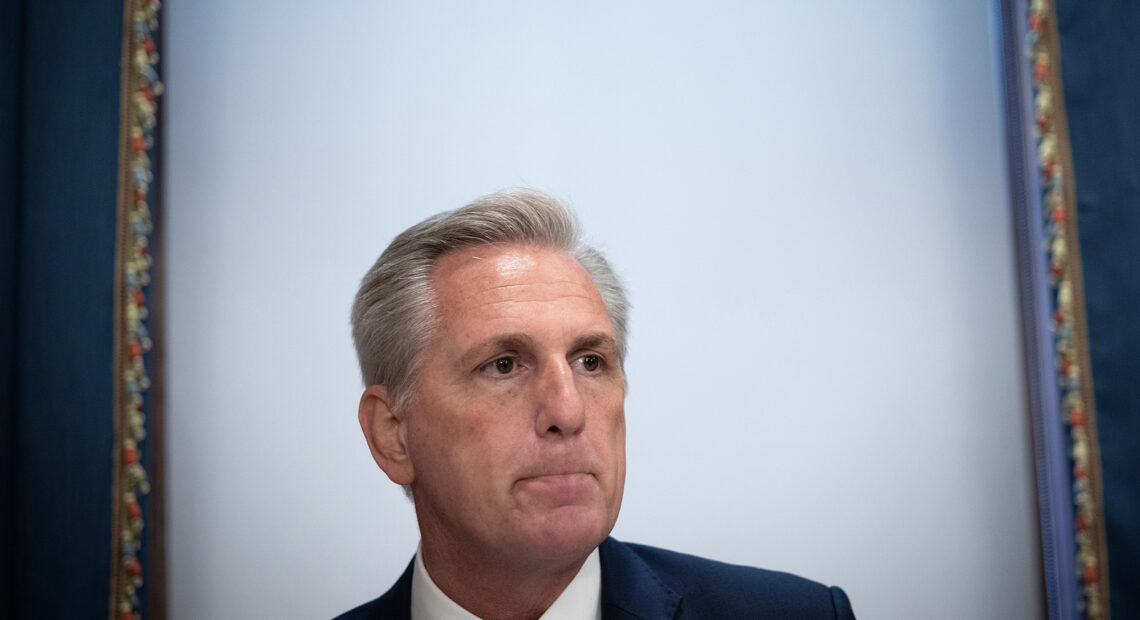 Nearly four months after condemning Rep. Marjorie Taylor Greene’s comments on antisemitic conspiracy theories, House Minority Leader Kevin McCarthy is once again rejecting the Georgia Republican’s rhetoric — this time over her equating of COVID-19 safety measures with the treatment of Jews during the Holocaust.

The remarks by the freshman Republican congresswoman — and criticism of them — come against the backdrop of antisemitic incidents across the United States in apparent response to the recent fighting between Israel and Hamas that saw a large number of civilian casualties. Those domestic incidents have been condemned across the political spectrum, though GOP lawmakers and some moderate Democrats have chastised progressives for, in their view, being insufficiently critical of these attacks.

In a statement Tuesday, McCarthy said Greene’s “intentional decision to compare the horrors of the Holocaust with wearing masks is appalling.” 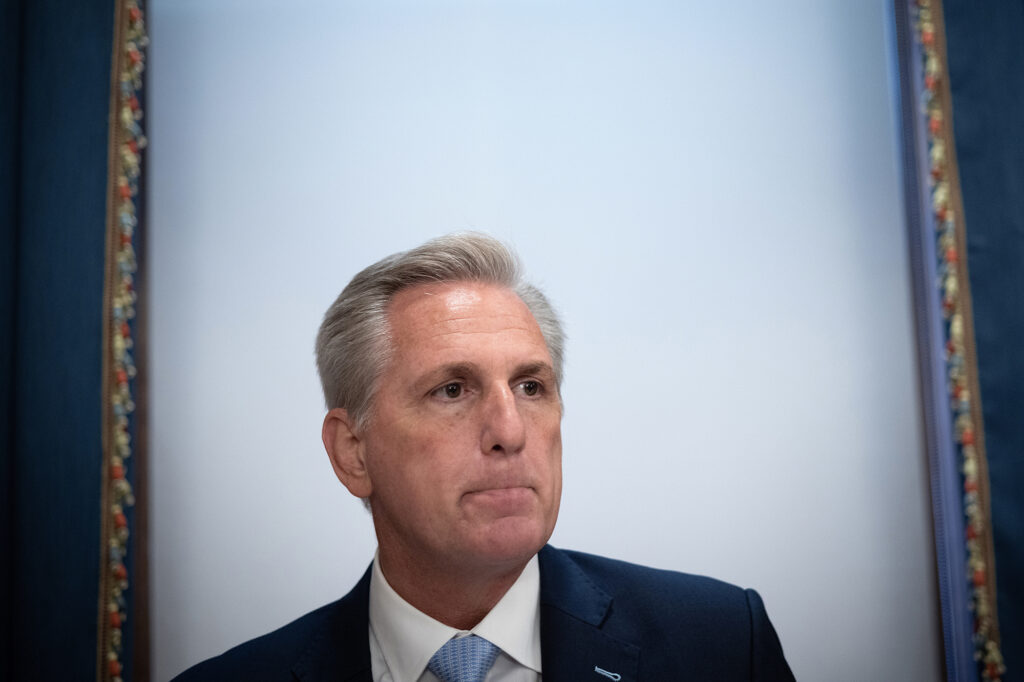 “Let me be clear: the House Republican Conference condemns this language.”

McCarthy then went on to allege that House Speaker Nancy Pelosi “completely ignored” the rise of antisemitism in her Democratic Party.

A statement from Pelosi’s office pushed back against that allegation, saying the California Democrat “has spoken out for decades against antisemitism and antisemitic attacks.”

“Leader McCarthy waited days to even issue a statement in response to one of his Members demeaning the Holocaust, and he clearly intends to continue to welcome Marjorie Taylor Greene in the GOP and shield her from any real consequence or accountability for her antisemitism,” the statement said. “Leader McCarthy’s silence has spoken volumes about his allegiance to the most extreme elements of the GOP Conference.”

Greene, in her own response, stood her ground. “Their attempts to shame, ostracize, and brand Americans who choose not to get vaccinated or wear a mask are reminiscent of the great tyrants of history who did the same to those who would not comply,” she said.

The competing statements came hours after Greene tweeted an article about a grocery store chain allowing vaccinated employees to go maskless and wear a vaccination logo displayed on their name badge. Greene compared the vaccination logo to the yellow Star of David badges that Jews were forced to wear by Nazi Germany.

It’s not the first time Greene made remarks comparing rules on COVID-19 masking to the atrocities of the Holocaust, where Nazis killed 6 million Jews.

Just days ago, she appeared on a conservative podcast and said Pelosi’s decision to continue masking requirements for House members on the chamber floor is “exactly the type of abuse” Jews experienced under the Nazi regime.

Joel Rubin, executive director of the American Jewish Congress, has called on Greene to be expelled from Congress.

“This is deeply disturbing to the American Jewish community,” he said. “This goes and goes and goes further and now Marjorie Taylor Greene is essentially saying wearing a mask — saving lives — is somehow equal to walking millions of innocent civilians to the gas chamber. It’s just beyond the pale.”

Greene has long embraced conspiracy theories and has a history of making racist and antisemitic remarks. In February, there was an uproar over resurfaced content from before her election that showed Greene “liking” social media posts that called for violence against top Democrats.

Marjorie Taylor Greene should be “expelled from Congress,” Joel Rubin, executive director of the American Jewish Congress says after the GOP Rep. compared House mask mandates to the Holocaust.

“This is deeply disturbing to the American Jewish community … just beyond the pale.” pic.twitter.com/cqmHql7eyN

McCarthy and fellow Republicans condemned her past comments at the time but stopped short of taking disciplinary action.

“I also made clear that as a member of Congress we have a responsibility to hold ourselves to a higher standard than how she presented herself as a private citizen,” McCarthy said at the time regarding a meeting he had with Greene in February. “Her past comments now have much greater meaning. Marjorie recognized this in our conversation. I hold her to her word, as well as her actions going forward.”

Rep. Brad Schneider, D-Ill., is drafting a resolution to censure Greene over her comments.

“This is a very clear case where a member of the United States House of Representatives has said something reprehensible, was called out for saying it, and rather than addressing it or apologizing, she’s continued saying it,” he told NPR.

“We all say things that are inarticulate or are not exactly what we mean, and you take a step to fix that. She clearly is saying exactly what she means.”

Schneider added that antisemitism needs to be called out “whether it’s on the left or on the right” and called for Republican support to censure Greene.

“Join me in this effort to censure her and demonstrate to the American people and the world that you just can’t make flippant comparisons to the worst genocide in human history.”

There has been a spike in antisemitic vandalism and attacks against Jews in recent weeks as the violence between Israel and Hamas escalated.

“I condemn this hateful behavior at home and abroad — it’s up to all of us to give hate no safe harbor,” he tweeted Monday.

More than a dozen Republican senators have introduced a resolution condemning violence against the Jewish community, along with denouncing anti-Israel rhetoric from elected officials.

“The horrific spike in anti-Semitic violence and crimes in the United States and around the world serves as reminder that hateful rhetoric and lies can quickly turn into violence,” Sen. Marco Rubio of Florida said in a statement. “We must be very clear that this ancient evil has no place in our society and ensure America’s Jewish communities are protected.”

“This trash should be the easiest thing in the world for every person in a leadership position to call out. But, perhaps because Israel has become a strangely controversial issue on the far left, the condemnations do not seem to be flowing quite as easily and unequivocally as they should,” he said.

McConnell quoted a tweet from Democratic Rep. Dean Phillips of Minnesota in calling on progressives to condemn antisemitism.

“I’ll say the quiet part out loud. It’s time for ‘progressives’ to start condemning anti-semitism and violent attacks on Jewish people with the same intention and vigor demonstrated in other areas of activism,” his tweet reads. “The silence has been deafening.”

The latest violence in the Middle East has resulted in increasingly vocal criticism of Israel from the left. As NPR’s Asma Khalid reported, the shift is linked to the growing power of racial justice movements in the United States and Israeli Prime Minister Benjamin Netanyahu’s embrace of the American right wing.