The Washington state attorney general on Thursday charged two Tacoma police officers with murder and one with manslaughter in the death of Manuel Ellis, a Black man who died after repeatedly telling them he couldn’t breathe as he was being restrained.

Witnesses reported seeing Burbank and Collins, who are both white, attack Ellis without provocation, according to a probable cause statement filed in Pierce County Superior Court. Rankine, who is described as Asian in court documents, is accused of putting pressure on Ellis’ back as he said he couldn’t breathe.

Ellis, 33, died on March 3, 2020 — Tasered, handcuffed and hogtied, with his face covered by a spit hood — just weeks before George Floyd’s death under the knee of a white Minneapolis police officer triggered a nationwide reckoning on race and policing.

The Pierce County medical examiner called Ellis’ death a homicide and attributed it to lack of oxygen from being restrained, with an enlarged heart and methamphetamine intoxication as contributing factors.

The death made Ellis’ name synonymous with pleas for justice at protests in the Pacific Northwest. His final words — “I can’t breathe, sir!” — were captured by a home security camera.

“Ellis was not fighting back,” the probable cause statement said. “All three civilian witnesses at the intersection … state that they never saw Ellis strike at the officers.”

The case marks the first time the attorney general’s office has charged police officers with unlawful use of deadly force, Ferguson said.

Community members gathered in June 2020 for a celebration of life for Manuel Ellis, who was killed by Tacoma police in March. In this photo, one of the attendees hangs a flyer with Ellis’ image that says “Happy Father’s Day Manny.” CREDIT: Parker Miles Blohm/KNKX

Five Tacoma officers have been on paid home leave pending the charging decision, and Ferguson said the investigation is continuing. Attorneys for the defendants did not immediately return messages seeking comment.

“We are disappointed the facts were ignored in favor of what appears to be a politically motivated witch hunt,” the Tacoma Police Union said in a written statement. “An unbiased jury will not allow these fine public servants to be sacrificed at the altar of public sentiment.”

The encounter began after Burbank and Collins reported seeing Ellis trying to get into occupied cars at a red light. They cast Ellis as the aggressor, saying he punched the window of their cruiser and attacked them as they got out, according to statements from other officers cited in the charging documents.

But two witnesses who recorded parts of the fatal interaction came forward with identical stories, saying the police attacked without provocation. An officer in the passenger side of a patrol car slammed his door into Ellis, knocking him down, and then jumped on him and started beating him, they said.

The witnesses “described seeing a casual interaction between the officers and Ellis before Burbank struck Ellis with his car door — there was no sudden, random attack by Ellis as the officers described that night to others,” the probable cause statement said.

Pierce County Sheriff Ed Troyer, who was then a detective and the spokesman for the sheriff’s office, said after Ellis’ death that none of the officers placed a knee on his neck or head. But one of the witness videos that later surfaced depicts just that.

The Pierce County Sheriff’s Office botched the initial investigation into Ellis’ death by failing to disclose for three months that one of its deputies had been involved in restraining Ellis; state law requires independent investigations. The Washington State Patrol took over, and the Attorney General’s Office conducted its review based on evidence gathered by the patrol as well as its own additional investigation. 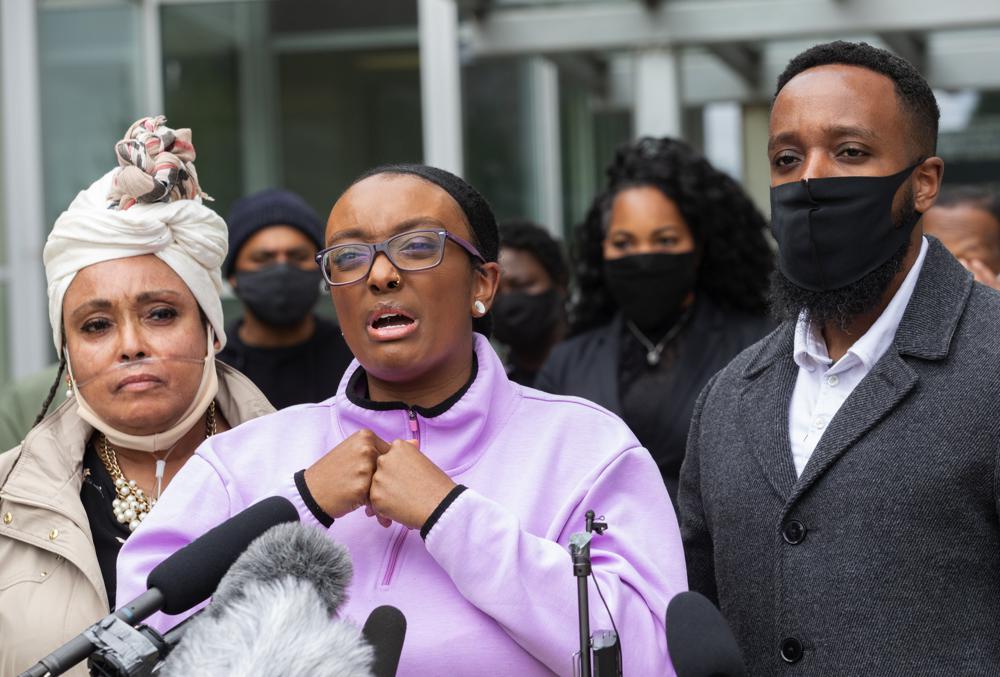 Monet Carter-Mixon, center, the sister of Manuel Ellis, speaks at a press conference in this June 4, 2020 photo, as Ellis’ mother, Marcia Carter-Patterson, left, and brother, Matthew Ellis, right, look on. On Thursday, May 27, 2021, the Washington state attorney general filed criminal charges against three police officers in the death of Ellis, a Black man who died after telling the Tacoma officers who were restraining him he couldn’t breathe. CREDIT: Ellen M. Banner/The Seattle Times via AP

Ellis had a history of mental illness and addiction. In September 2019, he was found naked after trying to rob a fast food restaurant. A sheriff’s deputy subdued him with a Taser after he refused to remain down on the ground and charged toward law enforcement.

His landlords at the sober housing where he was staying told The Seattle Times he had been doing well in recent months after embracing mental health care for his schizophrenia.

Ellis’ death, Pierce County’s botched investigation into it, and the national outcry for racial justice helped inspire Gov. Jay Inslee to convene a task force to suggest ways to guarantee independent reviews of police use of deadly force.

Last week, Inslee signed one of the nation’s most ambitious packages of police accountability legislation, including outright bans on police use of chokeholds, neck restraints and no-knock warrants. The legislation also makes it easier to decertify police for bad acts — and creates an independent office to review deadly force cases.

The charged officers could face up to life in prison if convicted, but the standard sentencing range is 10 to 18 years for second-degree murder with no prior criminal history, and 6.5 to 8.5 years for manslaughter. Warrants were issued for their arrest but it was not immediately clear if they had been taken into custody.

All three previously served in the Army, the attorney general’s office said, and as police officers all had taken training on crisis intervention. Collins, 38, and Burbank, 35, had each been an officer for four years by March 2020 after serving eight years in the Army. Rankine, 32, joined the department in 2018 after six years in the Army and two as a security contractor for the U.S. State Department.

Police reform activists have long complained about the prevalence of former soldiers in civilian departments, saying they tend to be more aggressive than called for. 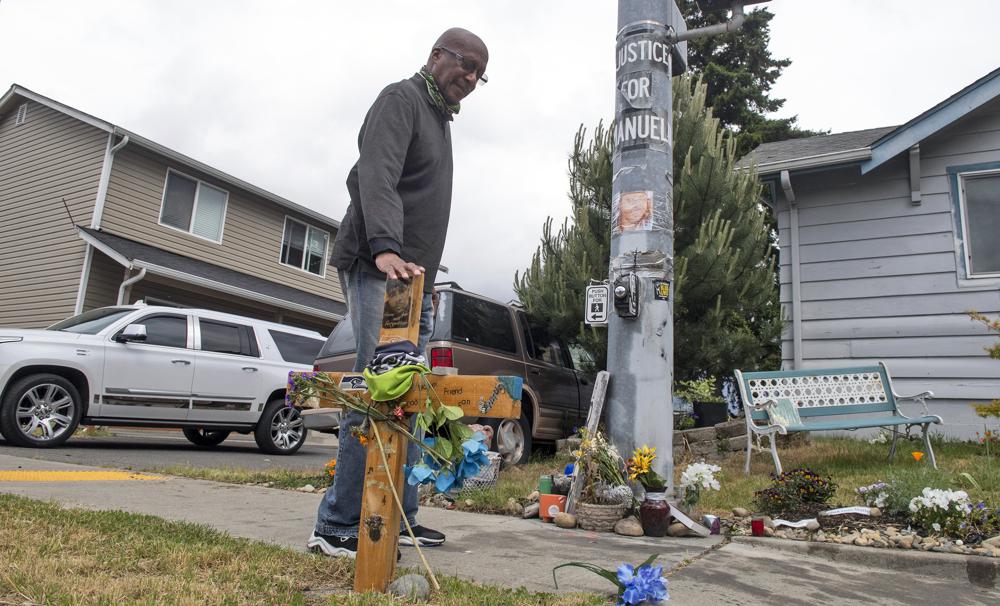 Billy Williams stops by a memorial Thursday, May 27, 2021, in Tacoma, where Manuel Ellis died while in police custody. The same day, Washington state attorney general Bob Ferguson charged two Tacoma police officers with murder and one with manslaughter in the death of Ellis, a Black man who died after telling them he couldn’t breathe as he was being restrained in March 2020. CREDIT: Tony Overman/The News Tribune via AP 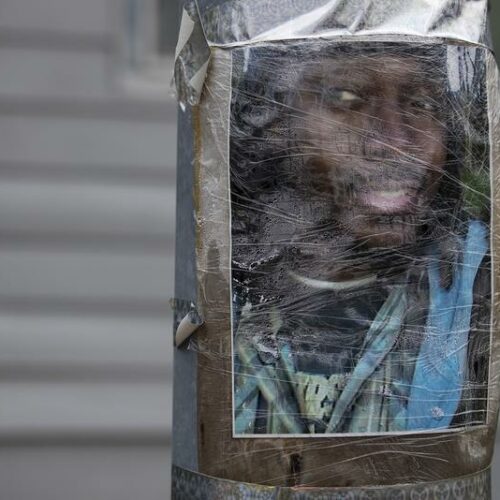