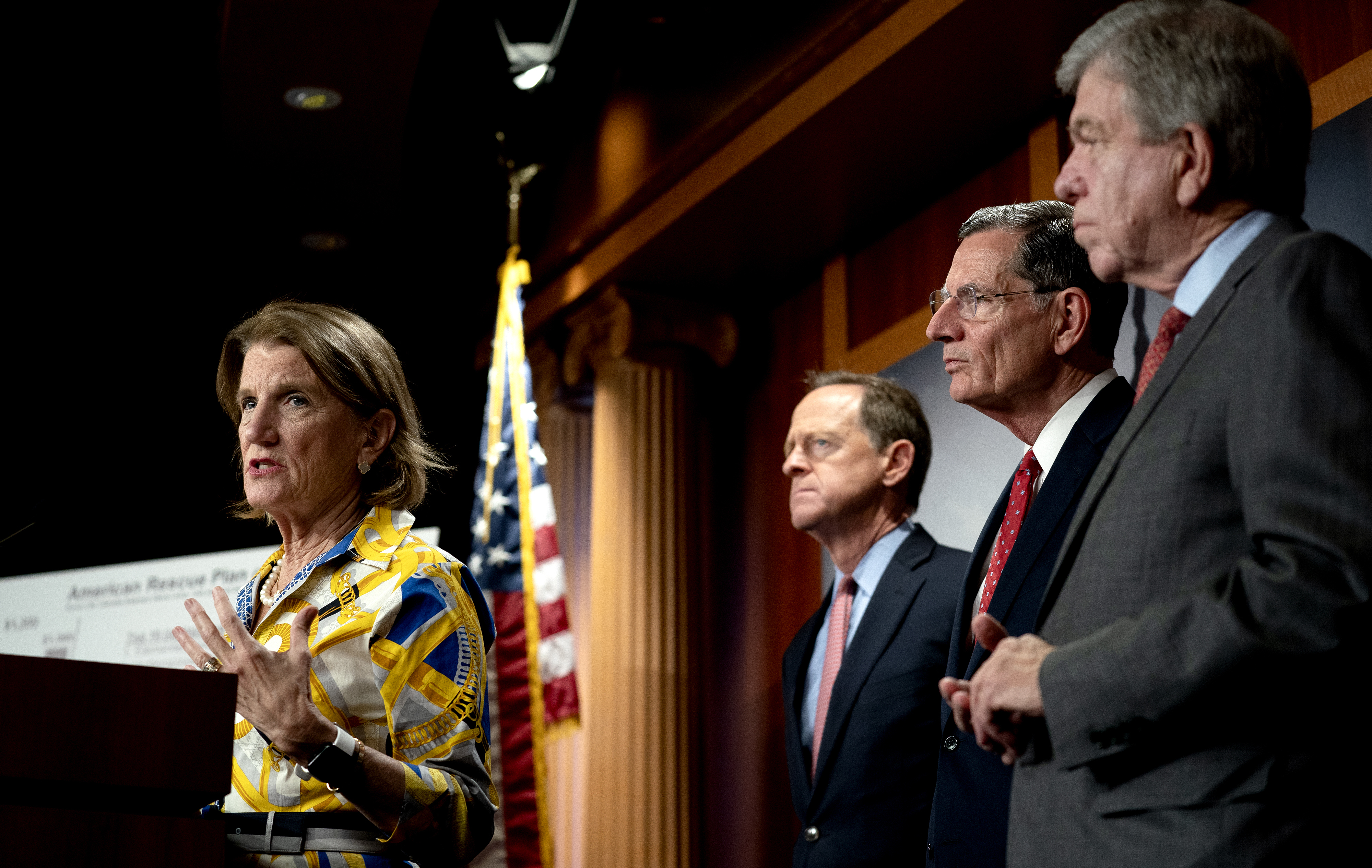 A group of Senate Republicans on Thursday unveiled a $928 billion infrastructure proposal to counter President Biden’s plan for a nearly $2 trillion bill.

The proposal outlines a significant increase from the most recent GOP plan to spend $568 billion. The new version includes additional money for roads, bridges, water, rail and airports, but the majority of the proposed spending is part of an existing baseline plan for investments. The total new money is just $257 billion.

West Virginia Sen. Shelley Moore Capito led a group of GOP negotiators in crafting the plan based on ongoing talks with the White House.

“It sticks to the core infrastructure features that we talked to initially,” Capito told reporters at the Capitol. “It is a serious effort to reach a bipartisan agreement.” 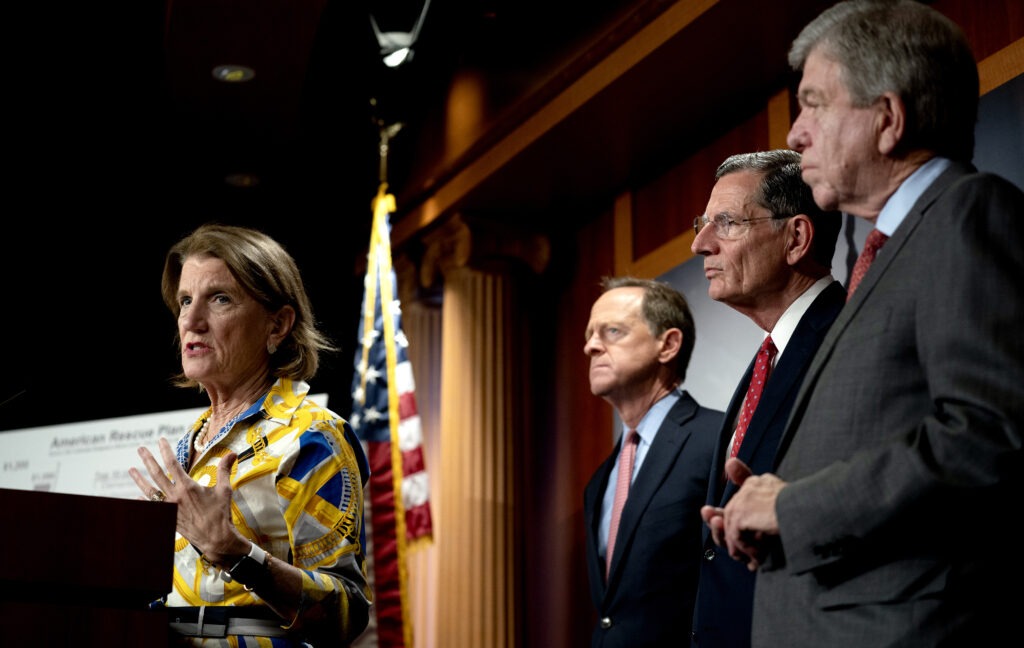 The single-largest spending item is $506 billion for roads, bridges and major projects — a $91 billion increase. Other increases include $48 billion for water infrastructure, $25 billion for airports, $65 billion for broadband and $22 billion for freight and passenger rail.

The shift comes days after Biden offered to lop off $550 billion from his original proposal, moving the two sides closer than they have ever been, though significant challenges remain.

Republicans plan to pay for the vast majority of the spending by repurposing funds Congress has already approved for other projects. They are primarily targeting unspent money meant for COVID-19 relief.

In a statement, White House officials called the GOP counteroffer “encouraging” but said they were concerned about the proposal to use COVID-19 relief funding to pay for the plan and that some concerns remained about funding proposals for VA hospitals, rail, transit, lead pipes and climate. Biden said he plans to meet with Republican senators on infrastructure talks next week.

In a letter sent to the White House on Thursday morning, the group of Republicans framed their offer as evidence that a bipartisan deal can be reached as long as the definition of infrastructure remains focused on mostly physical improvements.

“As a group, we were explicit that policies unrelated to physical infrastructure do not fit in this package,” they wrote. “This is not because we do not value these important issues. We simply believe that these policies should be addressed in separate legislation that does not dilute our shared objective of passing this package. We can address these important issues separately without weakening our commitment to building America’s infrastructure.”

The disagreement over how to pay for infrastructure may eclipse all other arguments going forward.

Democrats want to increase taxes on corporations and high income earners — a plan that Republicans have flatly rejected.

Biden and his allies have also firmly supported plans to pay for the spending by increasing the corporate tax rate to 28%, increasing the top federal income tax rate to 39.6% for those earning more than $400,000, and expanding the capital gains tax.

Democrats generally dispute the claim by Republicans that the government is sitting on extensive unspent funding from COVID relief.

The White House told reporters traveling with the president that roughly 95% of the $3 trillion earlier COVID relief money was either already obligated as of March or has been set aside for the Paycheck Protection Program, unemployment insurance or nutrition assistance.

“Of the remaining 5% the largest categories of unobligated balances are in the Heath Care Provider Relief Fund—funding for rural hospitals, health care providers and disaster loans for small businesses,” the White House said.

Targeting that money risks dragging infrastructure into ongoing political arguments about the coronavirus and the pandemic response.

Capito touched on one particularly heated element as a target for cost savings.

“I think 23 states have said they are not going to take enhanced unemployment,” Capito said. “Certainly those dollars aren’t going to be spent. We know that.”

Democrats have strongly defended enhanced federal unemployment payments as a critical part of supporting workers who lost jobs during the pandemic. Many Republicans blame the payments for keeping some workers out of the job market.

Sen. Roger Wicker, R-Miss., told reporters Wednesday in the Capitol that the proposal would meet White House standards while also appealing to at least some Republicans.

“We will have reached a number that President Biden has said was acceptable,” Wicker said. “I think there’s a great deal of support for it. Clearly we wouldn’t have unanimous support.”

Biden has recently called for $1.7 trillion in spending in a package that broadly redefines the definition of infrastructure as well as expanding federal spending priorities and the role of the federal government in the everyday lives of Americans.

Republicans have sought to narrow the discussion to policies that involve traditional physical infrastructure — such as roads, bridges, ports and highways — and some digital components such as broadband access.

Biden’s plan expands the term infrastructure to cover virtually every aspect of a worker’s relationship to the economy. His plan includes measures to combat climate change and promote green energy, funding for child care and early childhood education, union-friendly measures and worker protections.

The discussions thus far have focused mostly on Biden’s American Jobs Plan and not the additional spending called for in the American Families Plan, which was originally presented by the White House as a legislative companion.

Democrats say they are convinced that there is broad support for expanding federal funding for the programs Biden has outlined, particularly as workers and families continue to recover from the COVID-19 pandemic.