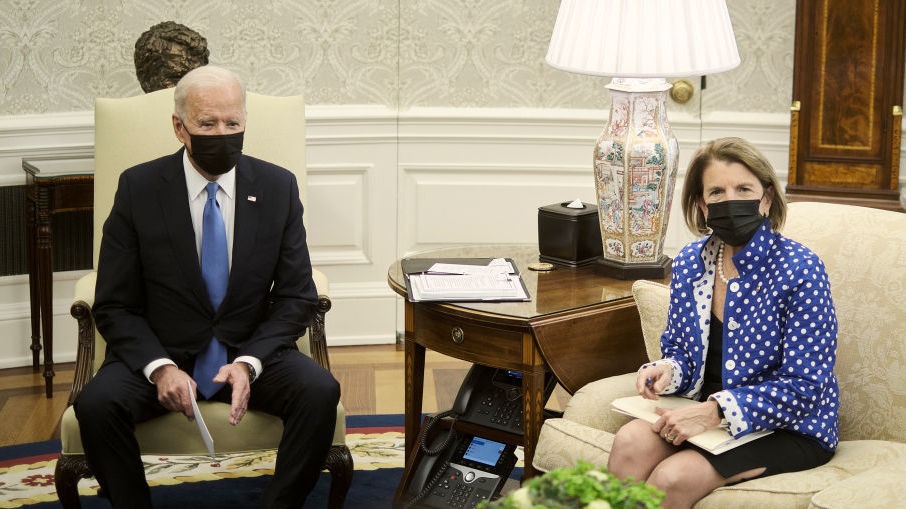 President Biden on Tuesday turned down the latest offer on an infrastructure deal from Senate Republicans, moving the debate on one of the president’s chief domestic priorities into a new phase.

Biden put the kibosh on negotiations after informing Republican Sen. Shelley Moore Capito of West Virginia that “the latest offer from her group did not, in his view, meet the essential needs of our country to restore our roads and bridges, prepare us for our clean energy future, and create jobs,” according to White House press secretary Jen Psaki.

“He offered his gratitude to her for her efforts and good faith conversations, but expressed his disappointment that, while he was willing to reduce his plan by more than $1 trillion, the Republican group had increased their proposed new investments by only $150 billion.”

Capito confirmed separately in a statement that Biden had ended negotiations with her.

Capito said the group of GOP senators offered a $1 trillion package that the president was willing to accept, but that the issue of how to pay for the compromise proposal was not something on which the two sides could agree.

President Biden, with Sen. Shelley Moore Capito of West Virginia on May 13 in the Oval Office, has ended talks with a Republican group she led on infrastructure.
CREDIT: T.J. Kirkpatrick/Pool/Getty Images

“In our discussions with the president, he himself made it clear that he was willing to accept an offer around $1 trillion, that baseline spending would and could be included, and that a plan could stretch over an 8-year period of time,” Capito said in a written statement. “The president also understood one of our red lines, which was not undoing the Tax Cuts and Jobs Act of 2017, which has helped so many Americans. Our latest offer, coupled with legislation the Senate is expected to pass today, would have exceeded the president’s threshold.” (Later Tuesday, the Senate passed a bill to boost U.S. scientific research and competitiveness.)

Democrats and Republican have been unable to agree on how to pay for the package. Democrats have proposed raising the corporate tax rate, but Republicans, who oversaw tax cuts to the richest Americans, have balked. They want to pay for the package through user fees. The White House has dismissed that idea, insisting it amounts to a tax on Americans making less than $400,000, the income at which Biden’s tax increase would begin.

Capito said: “Despite the progress we made in our negotiations, the president continued to respond with offers that included tax increases as his pay for, instead of several practical options that would have not been harmful to individuals, families, and small businesses.

“While I appreciate President Biden’s willingness to devote so much time and effort to these negotiations, he ultimately chose not to accept the very robust and targeted infrastructure package, and instead, end our discussions.”

There is a bipartisan group of senators already working to try to put together a package and see if it is possible to create something that could get 60 votes.

Separately, Senate Majority Leader Chuck Schumer, D-N.Y., told reporters on Tuesday that Democrats would work on a separate track and start drafting an infrastructure plan that would move forward through reconciliation and could pass with just the votes of Democrats. It’s unclear what proposal could unite all Senate Democrats.