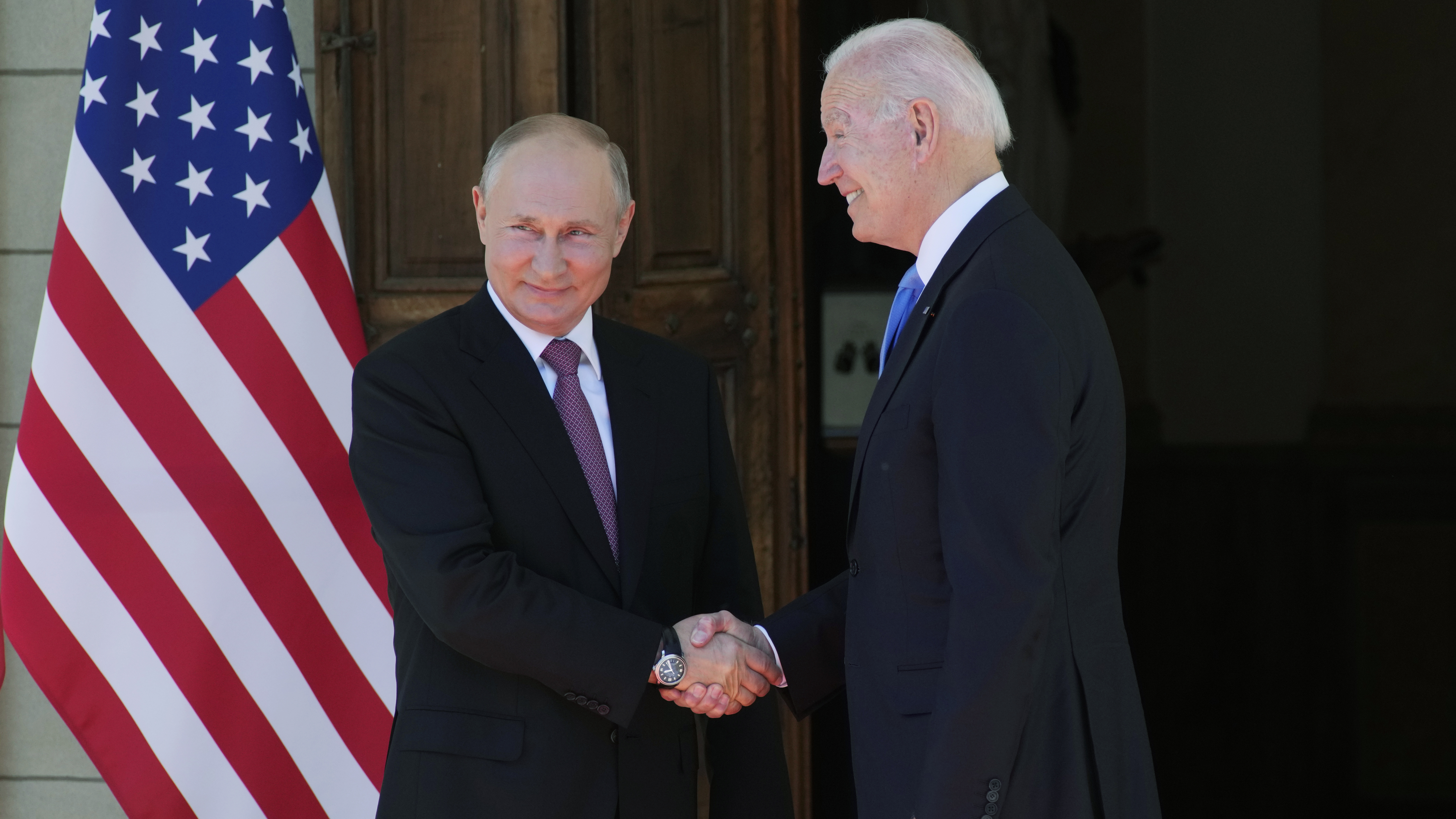 Biden bounded onto a stage flanked by large American flags to tell U.S. journalists about his meeting with Putin, taking off his aviator sunglasses as he reached the lectern.

“It was important to meet in person,” Biden said. “I did what I came to do.”

He said his goal with the meeting was to establish a relationship that is “stable and predictable.” But by Biden’s telling, he raised uncomfortable topics including ransomware attacks emanating from Russia, the wrongful imprisonment of two Americans and Putin’s mistreatment of political opponents.

“How could I be the president of the United States of America and not speak out about a violation of human rights,” Biden said. “I made it clear to President Putin that we will continue to raise issues of fundamental human rights, because that is who we are.”

Biden said he also tried to establish some basic rules of the road, sharing with Putin a list of 16 elements of critical infrastructure he suggested be considered off limits for cyber attacks. Biden said he told the Russians the U.S. has “significant cyber capabilities,” without elaborating on what they are, and if the Russians or criminals inside Russia continue to violate norms “we will respond.” Biden suggested Russian officials in the meeting had a moment of acknowledgement when he described what a cyber attack could do to Russia’s pipelines for instance.

There was an agreement, he said, for experts from the two nations to work together to establish guard rails for cybersecurity.

“The principle is one thing,” Biden said. “It has to be backed up by practice.”

When asked if he trusted Putin to keep his word, Biden responded: “This is not about trust. This is about self-interest and verification of self-interest.”

He added: “You know, as that old expression goes, ‘The proof of the pudding is in the eating it.’ We’re gonna know shortly.”

Aides had previously said Biden wasn’t there to make friends or build trust with a rival he describes as “bright,” “tough” and “a worthy adversary.” A White House official said Biden gifted Putin a crystal sculpture of an American bison by Steuben Glass of New York, as well as a pair of custom Aviators made by Randolph USA.

Still, there was much on the U.S. agenda — from recent ransomware attacks perpetrated by Russian cybercriminals and the air piracy in Belarus to arms control and climate change. There were also concerns to be voiced about human rights abuses, strongman tactics against opposition leaders and the imprisonment of two Americans. The two leaders did not agree on the release of those Americans, but Biden pledged that he will continue to work toward their release.

How Putin described the meeting

Before Biden’s press conference, Putin addressed reporters, many from state-owned Russian media. He said the conversations were constructive. “I think there was no hostility, quite the contrary,” said Putin.

He said they reached an agreement to start negotiations on cybersecurity, but took no responsibility for the cyber attacks and election meddling that U.S. intelligence has blamed on Russia and Russia-based cyber criminals.

When asked by an American reporter about Russia’s human rights abuses and imprisonment of Putin’s political opponents, including Alexy Navalny, the Russian president brought up the Jan. 6 insurrection, seemingly expressing sympathy for the rioters who were arrested.

“People came to the U.S. Congress with political demands,” Putin said. “They are being called domestic terrorists.”

Still, Putin described Biden as experienced and balanced. “We have to represent our countries and the relationship is a pragmatic one, primarily,” Putin said.

“It’s always better to meet face to face,” Biden said as reporters crowded into the book-lined room where the leaders met earlier Wednesday.

For the initial part of the meeting, which lasted 90 minutes, the two men were joined by just one top aide each, Secretary of State Antony Blinken and Russian Foreign Minister Sergey Lavrov. It was then opened up to a larger circle of aides.

“The U.S. and Russian relations have a lot of issues,” Putin said through a translator. “I hope that our meeting will be productive.”

The Russian president slouched in his chair for what became an extended and raucous photo op, with journalists jockeying for position. Biden sat up straight in his seat, positioned several feet away from Putin.

NPR’s Franco Ordoñez, who is among the reporters traveling with Biden, described a chaotic scene, with the pool of journalists traveling with the U.S. president initially barred from entry to the room. There was a lot of pushing and yelling, and at one point, Ordoñez says, a U.S. official tried to pull him through the scrum and into the room but “another non-U.S. security agent grabbed me and threw me back.”

Eventually, a few U.S. journalists were able to get into the room and get a view of the two leaders, but the pushing and shoving by security officials and Russian media never stopped.

Later Biden joked to American reporters “there was no problem getting through those doors, was there?”

Earlier Biden and Putin shook hands outdoors at the entrance to Villa La Grange, lingering on the handshake long enough for photographers to capture the moment. It was the start of the first formal meeting between the leaders of the two nations in three years, a stretch in which U.S.-Russian relations have grown increasingly strained.

On the previous occasion, Putin and President Donald Trump ended with the now-infamous Helsinki press conference at which Trump sided with the Russian leader over U.S. intelligence agencies (a stance that Trump later tried to backtrack).

What Republicans are saying

As the meeting was getting underway, the Republican National Committee sent out a statement criticizing Biden for inviting Putin to meet.

Danielle Alvarez, the communications director for the RNC, said in the statement that the meeting was a win that “Biden has handed Russia.”

“The American people deserve a leader who prioritizes our interests and holds bad actors accountable,” she said.

There has been a long-standing tradition of refraining from criticizing a president while on an overseas trip, but that practice has gradually eroded. Republicans have been preparing to portray Biden as weak, regardless of how the meeting goes. U.S. presidents going back to George W. Bush have all met with Putin during their time in office.

During the Trump administration, Democrats and even many Republicans criticized Trump for meeting with North Korea’s president, Kim Jong Un, without preconditions.