Sometimes, in the dark, a book will talk to you. The words stop crawling on the page and become music. Its voices whisper in your ear.

Read at night, at the end of a too-long day, and characters will enter and exit the rooms of memory, trailing the scent of cigarette smoke and faded perfume. With Simon Van Booy’s new novel, Night Came With Many Stars, open in front of me, I know the smell of summer afternoons and the pattern of paint spattered on a workingman’s boots. I can hear the bugs in the dark and feel the spill of light from a house at the end of a long, dirt drive. Find a book that speaks a language you know and you can drown in it without even realizing.

I’ve been a fan of Van Booy’s work for a long time. His short stories read like jagged glass set in beautiful boxes. Night is not a lot different. A novel, yes, and maybe his best — best of all his work I’ve read, for sure, and better, by a long stretch, than so much I’ve read that wasn’t written by him. But if his short stories are pieces of glass, each distinct and different, Night is a stained-glass window, shattered. It is a series of vignettes — of moments lifted whole and raw from the lives of a Kentucky family, generations deep — and not pieced together but curated. Each on display. Each its own and complete, but part of a greater whole. 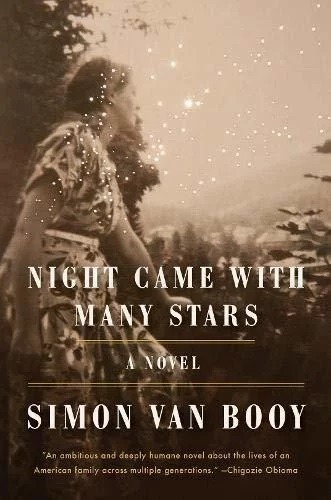 Night Came With Many Stars, by Simon van Booy

In 1933, Carol’s daddy Clay wagers her in a game of poker and loses.

In 1986, Carol’s grandson Samuel gets a nail in his eye while messing around with his best friend Eddie during shop class.

These two points — fixed in history, set on the page — are the moments upon which everything else hangs. A bad bet. A stupid accident. The first is evil done by evil men. The second, a mistake. Together, they bend the far courses of lives and shape generations. Van Booy is saying, Look what can happen. He’s saying, These tiny, monumental things.

Clay is a bad man — drunk, violent, a widower without an ounce of kindness left in him. But a bet is a bet and he gives up his only child to Travis Curt, sending 13-year-old Carol off in Travis’s truck with just a small green suitcase and the doll her mother made for her back when her mother was still alive. She’s to work for him as a domestic — cooking and cleaning. Travis rapes her, and Carol ends up pregnant, runs away.

Samuel is a good kid. Eddie does the best he can. The nail thing? It was a misfortune. The kind of thing that can happen to any child, at any time. They’re boys, Samuel and Eddie. They love each other fiercely. For a moment, it looks like everything might be okay.

But it’s not. Not for Carol. Not for Samuel. Certainly not for Eddie and not for many or most of those who fall into and out of their orbits across 70-some years. And through it all, Van Booy is saying, Look what can happen. The way no one escapes their past.

But Carol grows and Samuel grows. Carol finds love, friendship, she makes a home for her children — something she never had herself — and gets to watch them grow and make families of their own. Samuel has a crooked eye and a taste for cards and liquor that will haunts him all his youth until, finally, he drags himself out of the past he seems cursed to repeat. He meets a waitress named Heather and starts a family of his own. And Van Booy is saying, Look what can happen. These beautiful, healing things.

Because Night is a book about generations — about fathers and sons and mothers and daughters. It’s about crossroads and choices, the poisoned well of memory, the recurrence of objects and places, how the curses of the past and luck and chance all come together to make a mosaic of such sorrow and such beauty.

It is a heartbreaking book, a gorgeous book. A story told in the native tongue and tempos of paint factory employees and domestics and diner waitresses, of the guys working 20 years on the line at the Ford plant and those walking dazedly out into the light after 10 spent in prison.

It’s a language that Van Booy understands. An ordinary world that he sketches with sharp clarity and a softness that borders on magical. In Night, Van Booy finds the weakness, grace and beauty of common lives fully lived.

And in telling their stories, he makes every one of those lives enormous to behold.

Jason Sheehan knows stuff about food, video games, books and Starblazers. He is currently the restaurant critic at Philadelphia magazine, but when no one is looking, he spends his time writing books about giant robots and ray guns. Tales From the Radiation Age is his latest book.