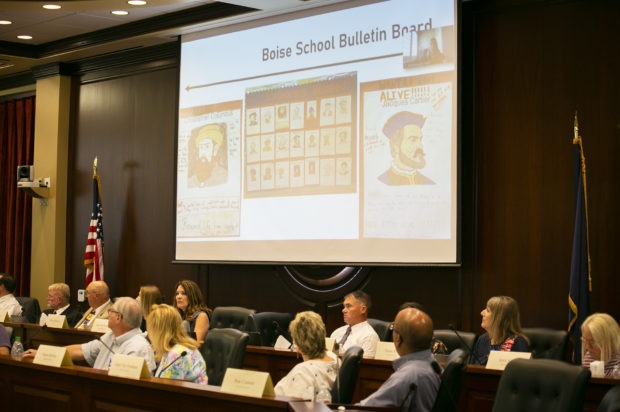 Originally posted on IdahoEdNews.org on June 24, 2021

The “Task Force to Examine Indoctrination in Idaho Education” reconvened Thursday — in a meeting marked by a rocky start, a tense middle and a slow end.

The meeting reconvened after a brief delay.

Then, about an hour later, a confrontation between audience members and student protestors ensued. As a handful of parents aired concerns they had with indoctrination in K-12 schools — many centered on stories of their school-aged children being alienated for being white — an audience member interrupted to complain about a group of Boise-area high school students, who were sitting within view of the Public TV livestream. The students’ T-shirts read “Hands Off Our Schools.”

Lt. Gov. Janice McGeachin, who created and co-chairs the task force, asked the students to move. Several audience members sided with the students, calling out, “leave them alone,” and “First Amendment.” Trying to control outbursts from both sides, McGeachin said, “This is not a dialogue.”

She eventually allowed the students to stay in place as she continued the meeting.

It was the task force’s second meeting, aimed at exploring alleged indoctrination in schools. As was the case with the first meeting in May, the group took no formal action.

Thursday’s meeting eclipsed four hours and drew around three dozen attendees. But by hour three, the crowd was noticeably less raucous than before, and it had thinned to about half its original size as presentations on superintendents and State Board of Education policy filled the waning minutes.

Over that time, the task force reignited quarrels with major education policy players that have unfolded over the last few days, repeatedly noting that representatives from the Idaho School Boards Association and the State Board declined invitations to speak Thursday, and that the State Department of Education didn’t send Superintendent of Public Instruction Sherri Ybarra, saying she was on vacation. 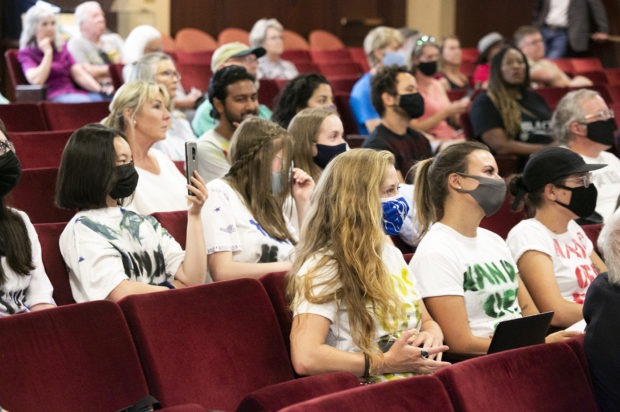 The back and forth unfolded in real time.

Midway through the meeting, as the task force discussed the State Board’s absence, board president Kurt Liebich sent out a news release.

“To date, I have not seen any evidence of indoctrination in our public education system. As a State Board, we have confidence in our local school boards and communities to address any issues should they arise,” Liebich wrote.

But one parent, Mark Hodges, complained of leftist teachings at Meridian’s Compass Public Charter School, after saying he has been the victim of discrimination. Growing up in Hawaii, he said he was refused service because he is white. At one point, Hodges defended racial profiling, saying, “some prejudice is not bad, and it’s well-founded.”

Tuned into the education indoctrination task force to hear a parent defend racial profiling. “If I see a group of non-whites drinking beer… I know what’s coming next, so I walk the other way.” #idpol

Politics was never far from the surface Thursday. McGeachin, who is challenging incumbent Gov. Brad Little, said she invited candidates for state superintendent to participate Thursday. Branden Durst, a former Democratic Idaho legislator and GOP superintendent candidate, was the only candidate to take up her offer.

Other speakers included an intern for McGeachin, who discussed State Board policy, and Sonya Harris — a task force member and Blackfoot school trustee — who called on viewers to strike out perceived leftist indoctrination by getting involved in their local school boards.

The task force is all volunteer, and no taxpayer money has been “or will ever” be spent to fund travel, lodging or food for the task force, McGeachin’s chief of staff Jordan Watters told EdNews by email Wednesday.