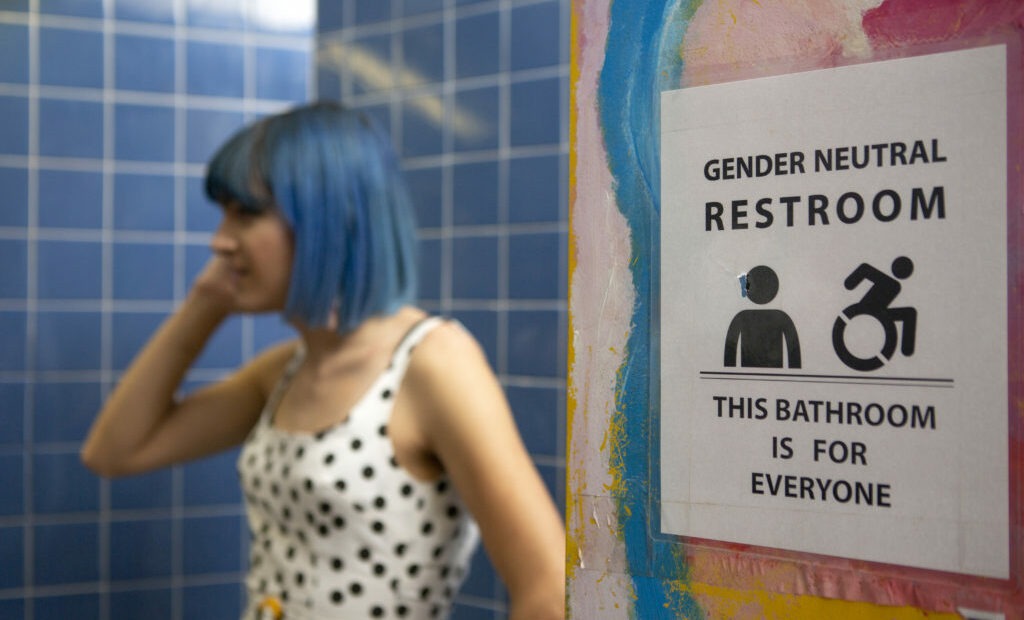 Monèt Sutton came out as nonbinary about seven months ago.

The 30-year-old said though it took a while to get to that point, they’re now finally happy with who they are, even if some people in their life, including their mother, among friends and other acquaintances, don’t fully understand their gender identity, which describes a broad range of genders.

One day, during Pride this year, a Britney Spears song popped in their head, amid the ongoing news over the singer’s conservatorship. After changing the lyrics to the song’s chorus, Sutton recording themself singing into a mic:

Sutton posted the video to TikTok, in part, as a gentle and fun way to remind their circle that they are nonbinary and what pronouns they used.

Being nonbinary means “being comfortable and who I am and not feeling the need to allow society to tell me if I’m a boy or a girl because I’m whatever I want to be and that’s just me,” Sutton told the PBS NewsHour.

There are about 1.2 million LGBTQ adults in the U.S. who are nonbinary, according to a first-of-its-kind study released last week by the UCLA School of Law’s Williams Institute, a research center that focuses on the intersection of law and public policy, and sexual orientation and gender identity.

Nonbinary is an umbrella term that, in the broadest sense, is used by people whose genders go beyond the man/woman categories. It has nothing to do with sex, or someone’s biological status. As multiple guides explain, nonbinary describes a range of genders. It can mean a gender that blends elements of man or woman. It could be a gender somewhere in between. It could also be a gender entirely separate from either category. Nonbinary also encompasses other gender identities such as genderqueer, and nonbinary people do not always use gender-neutral they/them pronouns.

Bianca D.M. Wilson, a senior scholar of public policy at the Williams Institute and co-author of the study, said the center wanted to highlight key demographic data on this subgroup because nonbinary people are a part of the LGBTQ community, and “we don’t have that data point anywhere else.”

According to the study, which focused on people ages 18 to 60, nonbinary people make up about 11 percent of the adult LGBTQ population in the country. The study builds on the work of two prior surveys — one on trans adults, the other on cisgender LGBTQ adults — to provide more comprehensive data on nonbinary people, a historically underresearched subgroup.

While nonbinary people have existed throughout history, they’re not currently counted by the U.S Census, U.S. passports are expected to have an option beyond male or female by the end of the year, but not every state has gender-neutral markers like “X” on driver’s licenses. 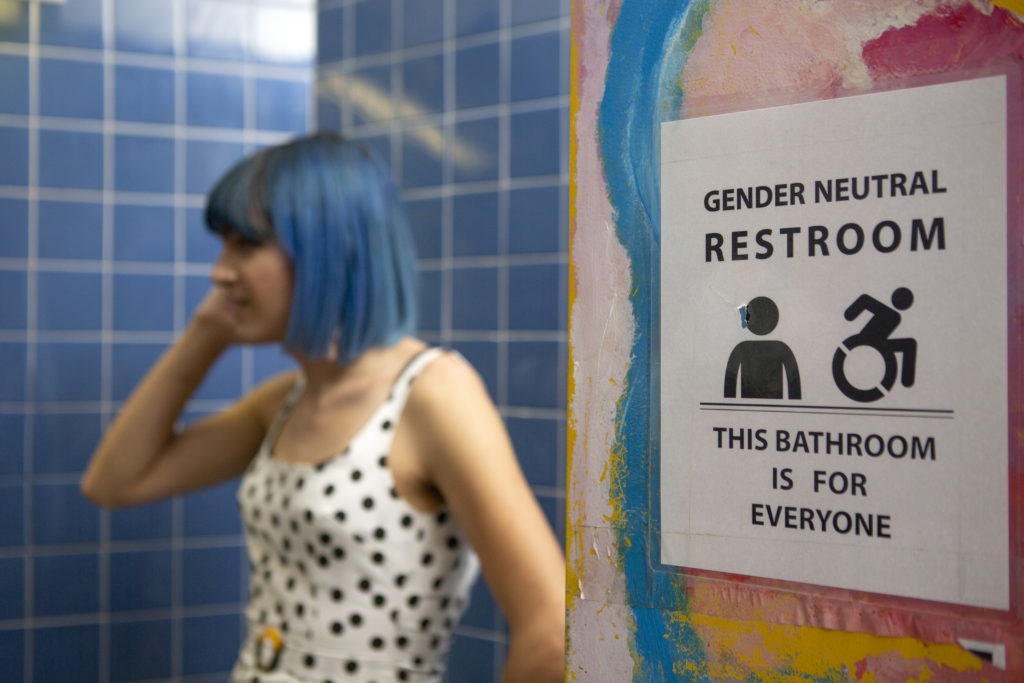 Establishing that 11 percent of the LGBTQ community currently identifies as nonbinary is important, Wilson said, because that knowledge can help inform a range of policies, including those barring discrimination based on sexual orientation and gender identity.

Wilson points to the Supreme Court’s ruling last year on the Bostock v. Clayton County case, which upheld Title VII, a key provision of the Civil Rights Act of 1964 that protected employees against discrimination based on sexual orientation or gender identity. The Biden administration in June issued a new interpretation that expanded the protection beyond employment settings, Wilson said. However, “that still required sexual orientation and gender identity be interpreted under sex.” And sex is not the same as gender.

A nonbinary person next to gender-neutral sign to a bathroom.The Williams Institute, too, found that 42.2 percent of the 1.2 million nonbinary LGBTQ adults are transgender, but that a greater share of the subgroup are cisgender, meaning their gender identity aligns with the sex they were assigned at birth. Actor Elliot Page, for instance, came out as trans and nonbinary last year, but not everyone who is nonbinary is also trans, as the study demonstrates.

The study also found that young people between ages 18 and 29 account for about 76 percent of nonbinary adults. This finding tracks alongside a Gallup study released in February that found that one in six adults in Generation Z, who were aged 18 to 23 in 2020, identify as LGBT.

Nonbinary people are part of a “growing subgroup” of the LGBTQ population, Wilson said, adding there’s been greater visibility for nonbinary people. More and more celebrities, like singers Demi Lovato and Sam Smith, and actors Indya Moore and Amandla Stenberg, have talked about identifying themselves as nonbinary or in related terms.

Part of this generational difference among the age groups could be how people describe gender identity, Wilson said.

“On one hand, that [generational difference] might reflect a growing trend of LGBT folks skewing younger and younger, meaning more and more young people are identifying as LGBTQ than older people,” Wilson said. “But at the same time, I do wonder if it also reflects the older LGBTQ people having less of a language for talking about some elements of gender fluidity.”

Nonbinary, then, could be a newer term more familiar to younger people, she added.

“We should be honoring the kind of new young language of nonbinary, but also acknowledging that, in some way, this is not all new,” Wilson said.

Under the nonbinary umbrella, there are also historical and cultural representations around gender variance, like “two-spirit” people in many Indigenous communities, as well as hijras in traditional Hindu culture. Elements of what we’re now calling nonbinary have been present in parts of Africa as well, Wilson said.

‘Nonbinary is not transitory … It’s who they are’

The Williams Institute’s study establishes a baseline number for nonbinary people and also provides data on some of the stresses of being a gender minority in the country. The study found that a majority of nonbinary people — 55 percent — were physically attacked or sexually assaulted as an adult. And before they turned 18 years old, 82 percent of nonbinary adults said they experienced emotional abuse. Forty percent said they experienced physical abuse, and 41 percent experienced sexual abuse in childhood.

Regarding the mental health of nonbinary people, nearly 94 percent said they have considered suicide. Another 39 percent said they have attempted it. While the data the Williams Institute’s study is from 2016 to 2018, these findings, its researchers concluded, show how the vulnerabilities among nonbinary LGBTQ adults tracks with data on the broader LGBTQ community.

The latest research echoes a Trevor Project study last year that found that transgender and nonbinary youth were 2 to 2.5 times as likely to experience depressive symptoms, seriously consider suicide, and attempt suicide than their cisgender lesbian, gay, bisexual, queer and questioning peers.

Stephen Russell is a professor of human development at University of Texas at Austin and has researched LGBTQ health and well-being for 25 years. He was a co-investigator for the Generations study — one of the two companion studies on which the Williams Institute findings were based — which focused on the health and well-being of lesbians, gay men and bisexuals across different generations.

“It’s important for people that are in the education system [or] people raising families to just understand that this is not an atypical part of growing up,” he said. “If your kid’s not nonbinary, they’re going to school with somebody that is.”

Other research, like the 2020 report from the National Academies of Sciences, Engineering, and Medicine, stressed improving data collection on the LGBTQ population to better address their needs.

“We need more work that helps us understand the landscape of people’s lives and experiences especially to the extent that it’s associated with their well-being and health,” he said. “For so many people, nonbinary is not transitory. It’s not on the way to something else. It’s not on the way to a gender transition or ‘just a phase’ or experimental. It’s who they are,” he said.

For Sutton, people make assumptions daily about their gender. Working at a call center, they are repeatedly misgendered by the customers who refer to them as “sir” and “ma’am.”

“I get that they’re trying to be respectful, but it’s just one of those things that irks me,” they said, “or I’ve had a few instances where someone would be like, ‘I’m sorry. Are you a sir, or are you a ma’am? I can’t tell by your voice.’”

Sutton said their workplace is one of the places they’re constantly reminded that a lot of people aren’t familiar with terms like nonbinary or understand what it means.

“I get that the world is slowly progressing, but it just frustrates me sometimes,” they said.