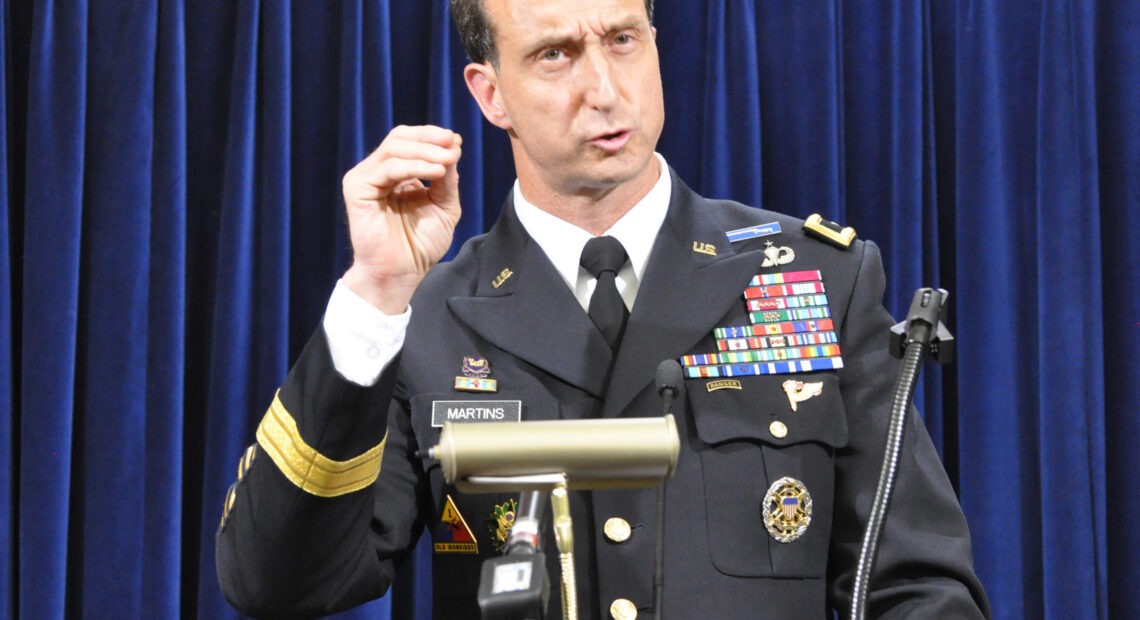 Less than two months before the 20th anniversary of the Sept. 11, 2001, terror attacks, the chief prosecutor of the alleged 9/11 conspirators announced his surprise retirement Thursday, making a trial in the case appear increasingly unlikely.

The retirement of Army Brig. Gen. Mark Martins after a decade in the job was disclosed in a message to the families of the nearly 3,000 people killed on 9/11. Martins had previously repeatedly delayed his retirement and was scheduled to remain in his position until 2023. No clear reason was given for his early exit.

The message — from Karen Loftus, director of the prosecution team’s Victim Witness Assistance Program, and obtained by NPR — said Martins is stepping down “in the best interests of the ongoing cases.” It cited Martins’ lengthy military career and noted that military court proceedings will restart soon in Guantánamo Bay, Cuba, after a pause of more than a year due to the pandemic, so “this is the time to transition to new leadership.”

Army Brig. Gen. Mark Martins, Guantánamo’s chief prosecutor, addresses the media on Oct. 19, 2012, at the end of a week of pretrial hearings for the five alleged architects of the 9/11 attacks. Martins announced his retirement this week.
CREDIT: Michelle Shephard/Toronto Star via Getty Images

A graduate of the University of Oxford, Harvard Law School, and the U.S. Military Academy at West Point, where he finished first in his class, Martins is also a former Rhodes Scholar and has spent 42 years in uniform.

His earlier-than-planned, abrupt departure is the latest in a lengthy string of setbacks in the effort to bring the 9/11 case to trial, including frequent turnover of judges. One military court judge quit last year after two weeks on the job.

Further complicating trial progress, the chief defense counsel in the 9/11 case, Marine Brig. Gen. John Baker, is retiring in November, a move he says is voluntary.

Even Baker was startled by the news of Martins’ retirement.

“I have to say, I was like, holy smokes,” Baker said in an interview with NPR. He added that Martins’ departure, “if nothing else, will delay the prosecution effort.”

Colleen Kelly, whose brother died in the World Trade Center collapse, said she, too, was caught off-guard by news of Martins’ retirement and is unsure how it will affect the prosecution of the accused Sept. 11 attackers.

“I don’t know, really, how to read the tea leaves right now,” Kelly told NPR. “I would like to think that there has been a decision within the administration to embark upon a new path. … My hope is that someone is looking at this from a 30,000-foot view and thinking, ‘This has gone on too long, we need to chart a different course.'”

At this point, nearly two decades after her brother’s death and with a 9/11 trial still elusive, Kelly said, she believes a new approach is needed to hold the attackers accountable and bring justice to their victims.

“For me personally,” she added, “I would hope that there would be some type of a plea deal,” since negotiating guilty pleas in return for life in prison could be a less expensive, more efficient alternative to going to trial.

The message by Loftus said a successor to Martins “is likely to be named in the near future” and, in the meantime, deputy chief prosecutor Michael O’Sullivan will become acting chief prosecutor when Martins’ retirement is effective Sept. 30.

As chief prosecutor of the military commissions, Martins oversees all war crimes prosecutions at Guantánamo, not just the case against the five Sept. 11 defendants.

But the 9/11 case is the military court’s most prominent legal proceeding, and has been mired in years of pre-trial hearings as prosecutors struggle to bring it to trial. The cumbersome nature of conducting the case in Cuba has contributed to delays, as has the ongoing legal debate over whether evidence obtained through torture can be used at trial.

With U.S. troops now withdrawing from Afghanistan and the Biden administration having cleared several Guantánamo prisoners for transfer to other countries in recent months, several legal experts said those moves could help lay the groundwork for Guantánamo’s eventual closure.

The military court and prison have cost U.S. taxpayers more than $6 billion since 2002.