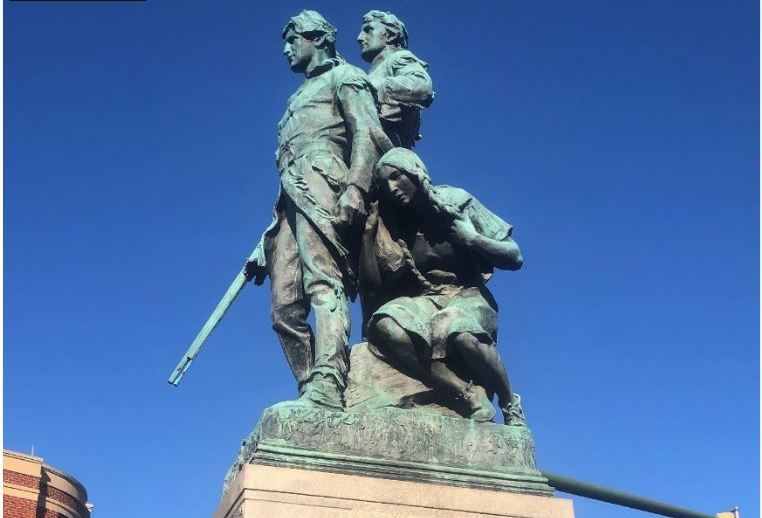 After Removing Confederate Statues, Charlottesville Takes Down One Of Lewis, Clark, Sacagawea

Saturday marked a day of sweeping changes to the landscape of Charlottesville, Va., as local officials removed three statues seen by many as symbols of perpetuating racial inequality in America.

Early Saturday morning, the city took down statues of Confederate Generals Robert E. Lee and Stonewall Jackson. Then, during an emergency midday meeting of the city council, officials unanimously voted to remove another statue featuring Meriwether Lewis, William Clark and Shoshone interpreter Sacagawea, which was taken down Saturday afternoon.

Public outcry over the statue of Lee became the backdrop for an August 2017 “Unite the Right” rally in which white supremacists descended on the city, ultimately leading to the death of one counterprotester.

During a special emergency meeting, the Charlottesville City Council unanimously voted to remove another a statue of Meriwether Lewis, William Clark and Shoshone interpreter Sacagawea. Courtesy City of Charlottesville

As as a crane neared the Lee monument Saturday morning, Charlottesville Mayor Nikuyah Walker — the city’s first Black female mayor — spoke to a crowd gathered at the site.

“Taking down this statue is one small step closer to the goal of helping Charlottesville, Va., and America, grapple with the sin of being willing to destroy Black people for economic gain,” Walker said, The Associated Press reported.

Descendants of Sacagawea say the statue is offensive

The statue of Lewis, Clark and Sacajawea was erected in 1919 and depicts Lewis and Clark viewing the Pacific Ocean for the first time. Sacagawea is crouched behind the two of them.

Dustina Abrhamson, a descendant of the Native American icon, told NPR in 2019 that the statue made her great-great-great aunt appear cowardly.

“It depicts our ancestor as if she was a dog going along on the trip,” Abrahamson said at the time.

City Manager Chip Boyles said the special emergency meeting was called because the removals of the Lee and Jackson statues had gone smoothly — and that resources already in place made for an opportunity to act immediately on the third monument.

Councilors said they hoped the relocation of the statue would allow for the proper “recontextualization” of Native American peoples and that Indigenous people would be consulted in the process.

While no specific decisions were finalized during the meeting — including possibly giving the statue to the Lewis & Clark Exploratory Center — officials agreed to remove the statue from its downtown location.

Rose Ann Abrahamson, Dustina Abrahamson’s mother, spoke to the council by phone at the end of the emergency meeting.

“I feel that it should just be melted down. That’s my opinion. I feel that it’s entirely offensive and it should be obliterated,” Abrahamson said. “But if it can be utilized to give a message — to give a greater message — to educate the public, that would be an opportunity. So I’m very pleased with what is taking place, and it’s been a long road.”

Following the meeting, officials announced road closures in the immediate area of the third statue as crews prepared for its removal. By 3 p.m., it was taken down.

Across the U.S., efforts to remove statues of Confederate generals and soldiers gained much traction following the May 2020 death of George Floyd, an unarmed Black man from Minneapolis.

The Southern Poverty Law Center, a group that tracks hate groups and symbols, reported in February that at least 160 symbols honoring the Confederacy were removed in 2020. Of those, 94 were monuments.