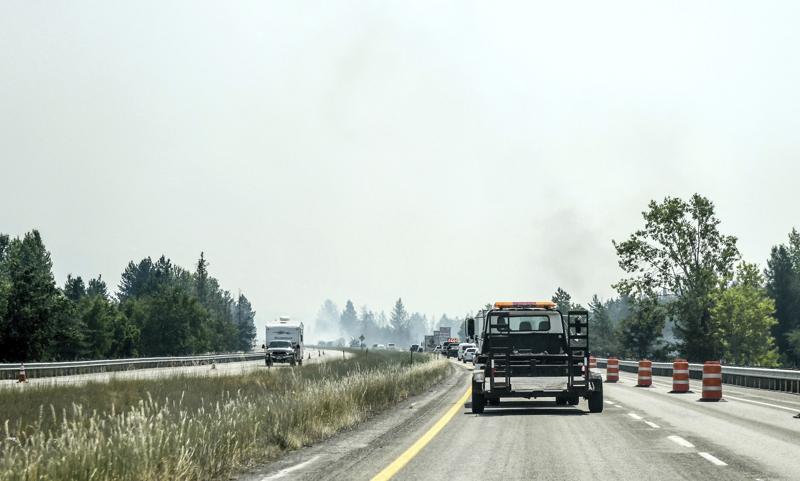 “Wildfire is presenting an imminent threat to life, property, and the environment, and we need all hands on deck,” Little said in a statement. “I appreciate our firefighters and fire managers for working so hard under such challenging conditions, and I am grateful that our guardsmen are able to step in once again to support Idaho communities.”

It’s the first time the Idaho Department of Lands has requested the governor issue such an emergency declaration.

A section of I-90 is down to one lane due to heavy smoke near Cataldo, Idaho caused by fires in the area, July 7, 2021. CREDIT: Kathy Plonka/The Spokesman-Review via AP

The agency said the soldiers will help with fire suppression and logistics support. State officials didn’t say how many soldiers might be deployed to help with wildfires.

Officials also said National Guard Blackhawk helicopters could be used to drop water or other suppressants on fires as well as transport firefighters and supplies.

Besides tapping the National Guard, the Lands Department has also requested workers in the agency with fire line qualifications to make themselves available for fire assignments.

Fire crews in north-central Idaho were facing extreme fire conditions and gusty winds as they fought two wildfires that threatened homes and forced evacuations in the remote and tiny community of Dixie about 40 miles southeast of Grangeville.

Efforts were complicated in part because firefighting resources were stretched thin nationwide, and in part because the area has very challenging terrain covered with trees and plants that are dry from an ongoing drought, fire managers said.

The fires near Dixie, covering a combined 19.5 square miles, were among several that started after lightning storms swept through the region earlier this week.

Stage 2 restrictions prohibit campfires and operating motorized vehicles off designated roads or trails. Other restrictions include using a chainsaw for firewood gathering between 1 p.m. and 1 a.m.