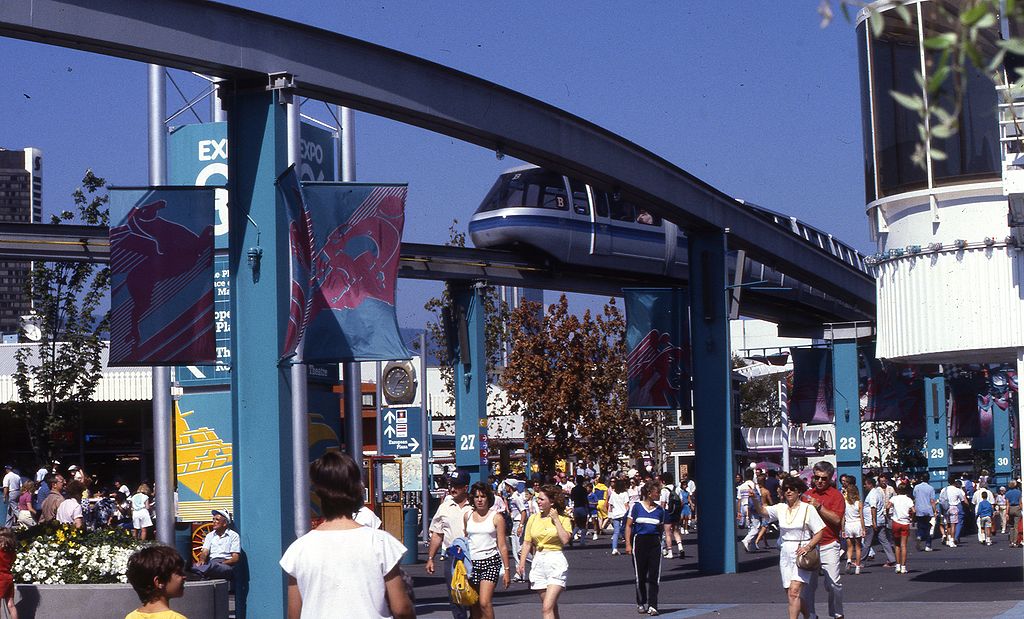 I am a fan of world’s fairs, an interest that started in 1962 with Seattle’s Century 21 Exposition. This year marks the 35th anniversary of another important fair in the region, Vancouver, British Columbia’s Expo ’86.

When Vancouver hosted a modern expo that year, it joined the Pacific Northwest’s other major cities, Portland (1905), Seattle (1909, 1962) and Spokane (1974) as exposition hosts. In the years since Expo ’86, Vancouver’s has also gained important symbolism as the last expo hosted in North America. It was a kind of golden moment. Opened by the then-fairytale couple Prince Charles and Princess Diana, it drew some 22 million visitors, more than double Seattle’s 1962 fair.

Expos are still held regularly around the world — the next one is in Dubai, in the United Arab Emirates, and opens in October; another is planned for Osaka, Japan in 2025. Memories in North America are short when it comes to world’s fairs. More than a generation has gone by since Vancouver’s. The last U.S. fair, in New Orleans, in 1984, was a fiasco. We are in the longest American fair drought since they began in the mid-19th century (though Minnesota is angling to host a world’s fair in 2027).

In 1986, I worked at Washington Magazine, which covered the state. Our magazine put out a special issue, “Roads to Expo,” suggesting travel routes to the fair in hopes of siphoning off some tourist dollars in the Evergreen State from travelers headed north to Vancouver. After the fair opened, I was sent up there with a press pass to scout it out.

The monorail at Expo ’86 in Vancouver, Canada, the last time a Northwest city hosted the global cultural gathering. Seattle, Portland and Spokane have hosted as well. CREDIT: Colin Rose, CC BY 2.0 creativecommons.org/licenses/by/2.0, via Wikimedia Commons

I was prepared not to like it if only because Vancouver was something of a rival to Seattle. But Expo ’86 was a terrific fair. The videos and multimedia shows were memorable, like the holographic effects in the General Motors “Spirit Lodge,” where a First Nation elder preached about the freedom of movement. The late expo expert Alfred Heller wrote in his book World’s Fairs and the End of Progress that the Spirit Lodge’s powerful sales pitch was effective and compared it to the 1939 New York World’s Fair’s autocentric “Futurama.” Looking back, the presentation might induce a cringe by having an Indigenous figure be the spokesperson for transportation, and more highways, but the special effects set a new standard in high tech expo infotainment.

Heller also pointed out the GM message conflicted with the star attraction of the fair: “Highway 86,” a massive sculpture by James Wines. The undulating piece of artwork comprised some 200 real vehicles frozen in time and space on an imaginary roadway, as if they were caught in an apocalyptic doomsday evacuation. It also might have had some apocalypse cred with the Chernobyl meltdown having occurred during the fair. At 700 feet long and 40 feet wide, the artwork spanned much of the expo site.

As a fun playground it worked, but so too did its message about the problematic nature of burning fossil fuels, building highways, and expecting to escape environmental doom. Its message is even more relevant now. The sculpture was sadly dismantled when the fair closed, as most expo exhibits, pavilions and artwork are meant to be ephemeral.

At the Canadian Pacific Pavilion, I was blown away by the film, later nominated for an Oscar, called Rainbow War, with its powerfully entertaining message of bridging differences between cultures defined and separated by color. Of the provincial pavilions, the Northwest Territories charmed me with its honesty about the modern problems with machines and resource exploitation in the far north. The pavilion’s restaurant was popular, too: I remember eating a seafood chowder of Arctic char in a crowded dining room. But I gave little thought to the environmental consequences of my meal. Modern fairs at their best raise questions in their visitors’ minds about the contradictions between our ideals and the realities of daily life.

The China Pavilion was fascinating, coming at a time when relations with the U.S. were shifting. It offered an ancient chariot and a first glimpse of the recently discovered, and now famous, terra cotta figures from 2,000 years ago. Mao buttons for sale as souvenirs felt somewhat transgressive. I still have on my desk a small painted Chinese figure of a cultural revolutionary that I bought there. The figure seems to beckon the masses to use the pencil sharpener in his base. Unfortunately, pencils themselves are now pretty obsolete.

The real impact of Expo ’86 was on Vancouver itself. What had once been a provincial city burst with development, mass transit and mass appeal, bringing in immigrants, high-rises and new wealth. Its Pacific Rim profile was lifted.

If the expo site on False Creek was largely dismantled, the city sprouted, and by the 1990s the so-called “Vancouver miracle” was touted across the globe as the way to achieve density and livability with planning, investment and growth.

Urban problems and affordability became issues in the city, but Vancouver’s growth was partly a consequence of being a showcase for urban possibilities. British Columbia’s former attorney general, Geoff Plant, wrote on the Expo ’86’s 30th anniversary about the consequences of asking the world to come and take a look: “The world accepted our invitation. What did it see? A marvelously beautiful setting, a mild climate, the rule of law, respect for private property rights, a balanced market economy, safe neighborhoods and a tolerant society. Who can blame the world for wanting some of this?”

Often overlooked in thinking about “world” expos is that they are largely designed to boost and remake the host city, not change the world. Seattle’s ’62 fair resulted in a global landmark (the Space Needle) and permanent civic center, a long-desired goal of the city’s master plan. The Spokane fair in ’74 created a riverfront park and revitalized a downtown dominated by railroad yards. Vancouver gained its transit system, SkyTrain, and a live events stadium called BC Place, and the city became home of the 2010 Winter Olympics. A less certain result is acquiring “world class” status. Such legacies are not sure things, but they can set a stage for future development. Fairs also act as touchstones, a record of a city’s before and after, a way to mark progress, or lack of it.

Expos don’t solve urban problems or world problems. But they can shift a city’s course. They’re a kind of global brainstorming process. Their themes — Vancouver’s was “Transportation and Communication: World in Motion — World in Touch” — are very general, but in Vancouver’s case such a theme is still relevant in urban Cascadia. The crisis of climate change and the opportunities for post-pandemic adjustments to urban patterns and psyche add urgency to the issues.

I have been to 10 expos in 10 different countries and plan to go to future ones. Vancouver’s was the first I attended as an adult, and it helped inspire me to continue to study the form, intentions, successes and failures of such events. At expos, big ideas are packaged in an entertaining way, and, yes, messages are often overly promotional, crassly corporate and frequently nationalistic. But they also play a role in civic engagement and cultural exposure, and can give people hope for a better future.

America has nearly forgotten about expos. Recent efforts to land them in San Francisco, Edmonton and Minneapolis-St. Paul have all failed. Government restrictions on spending and the belief they are more trouble than they are worth or outdated have prevailed. Some question whether big events like expos and Olympic Games really benefit host cities. Fair enough. But if Americans traveled abroad and saw these inspiring spectacles in places like China, Spain, Korea, Kazakhstan, Italy and Dubai, they might get the expo itch back.