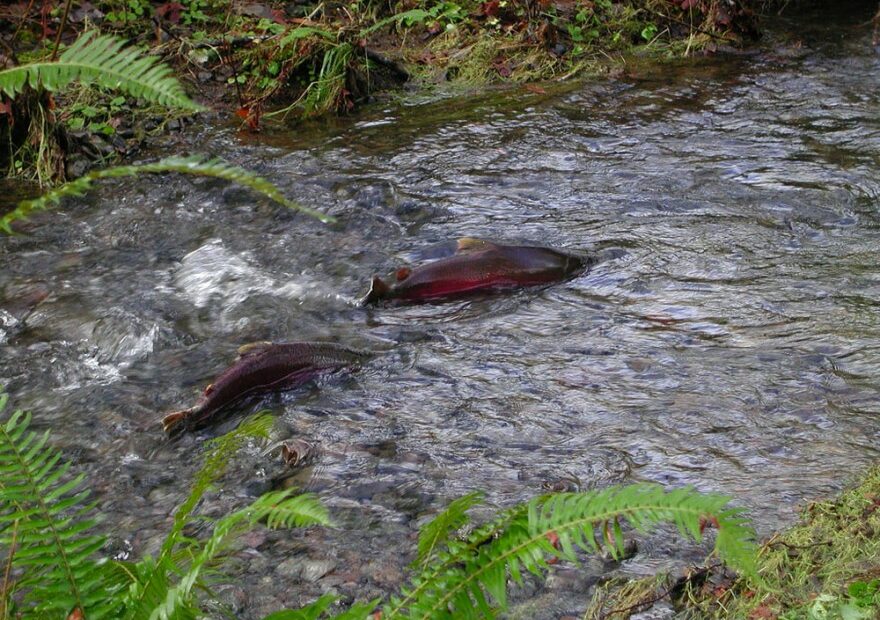 Pacific Northwest salmon could get some help from the proposed federal infrastructure package.

Some of the funding in the U.S. Senate’s version of the bill could help remove barriers to salmon habitat – just not the same barriers on the Snake River that Rep. Mike Simpson, R-Idaho, had hoped to eventually include.

The $1 trillion infrastructure package includes $1 billion over a five-year period to help states remove pipes, known as culverts, that allow streams to flow under roadways. Improperly designed culverts can deter salmon from reaching significant portions of their habitat.

Stream flows inside culverts can be too swift or too shallow for fish to navigate, according to Snohomish County’s Fish Passage Culvert Program. Culverts can also create waterfalls that block salmon from moving upstream.

The culvert removal program, proposed by Sen. Maria Cantwell, D-Washington, will be the first federal program of its kind. The program will open up salmon spawning habitat in Washington, Cantwell said.

“The infrastructure bill makes serious investments in some of our salmon recovery challenges,” Cantwell said in a statement.

In a statement, Murray said, “I am firmly committed to making sure the federal government is doing its part to recover our iconic salmon runs.”

Murray and Inslee thought these types of infrastructure issues had a better chance in the package than a proposal to remove the four Lower Snake River dams. Simpson wanted to include a wide-ranging $33.5 billion proposal that would have removed the controversial dams with funding from the infrastructure deal.

Washington’s congressional delegation didn’t back Simpson’s plan, saying more work was needed prior to the passage of the infrastructure package. Instead, Inslee and Murray hope to further discuss the fate of the controversial dams.

A better solution for salmon in the infrastructure package, the delegation said, could replace culverts, which have long blocked the path for fish to colder waters.

In 2001, 21 tribes had sued Washington to fix more than 800 problem culverts. The long-running court case ended in 2018 in the state Supreme Court with a tied decision.

The ruling meant Washington must fix most of the culverts that block salmon passage by 2030, which KUOW reported is 82 years faster than the state’s plan would have taken. At the time, the state estimated it could cost more than $2 billion to fix the culverts.

A spokesperson for Inslee said exact funding available to Washington for culvert removal, repair and restoration won’t be known until Congress passes a final bill.

The center is disappointed the package doesn’t include a line item to remove the Snake River dams, which could make up 65% of the region’s cold water in 2080, according to a Trout Unlimited analysis.

But, LaBorde said, many are looking at this as more of a “yes, and” opportunity. These programs will greatly help fish, she said, but more can be done ecosystem-wide.

Many on-the-ground projects could serve as building blocks to move toward Snake River dam removal, she said.

“The fact is, there is a great web here for salmon recovery and to build to removing the dams,” LaBorde said.

Among other funding for salmon, the federal infrastructure bill also includes $172 million for the Pacific Coastal Salmon Recovery Fund, a grant program for states and tribes to help protect and restore salmon habitat. It includes $132 million for the National Estuary Program. The National Oceanic and Atmospheric Administration will receive $400 million to restore fish passage, 15% of which will be set aside for tribes and tribal partnerships.

The bill faces an uncertain future in the U.S. House.