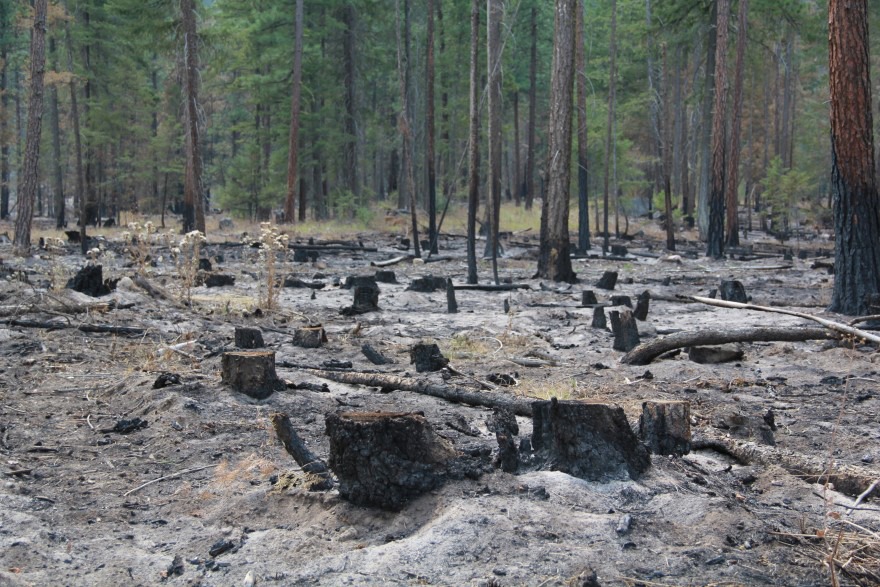 As wildfires have burned throughout the Northwest this summer, some forest stands have fared better than others. Managers say that’s thanks, in part, to thinning and prescribed burns, which have made the stands more resilient in the face of wildfire.

“What we’re trying to do is get our stands into the structure of what they used to be,” said Pat Ryan, Northeast region state lands assistant manager with the Washington Department of Natural Resources, referring to an era when forests were less dense.

Ryan recently toured a section of forest in North Central Washington that burned in the Cedar Creek fire. Land managers thinned a section of the Virginia Ridge stand last October. The plan had been to go through the area with a prescribed burn to clear the forest floor of piled up debris, but poor weather conditions delayed the controlled burn.

Then came the Cedar Creek fire.

“The fire came down the hill,” Ryan said. “A good amount of the fuels were still there.”

Ryan said they’d hoped to harvest more trees than area residents wanted to cut down. He said a more heavy-handed thinning could have made the forest stand even healthier and more resilient.

But, the thinning still succeeded because it reduced the amount of fuels to burn, Ryan said. It also helped firefighters steer flames away from the community of Pine Forest.

“That’s because the intensity was much lower, and you don’t have as much fuel,” Ryan said. “Then it’s easier to try and get a fire to move where you would like.”

He said the forest stand would have fared even better if it had been thinned even more and if they’d been able to conduct a prescribed burn.

Up on the hill, Ryan said he thinks about 75 percent of the remaining trees might not make it. He won’t know for sure until he surveys in the spring. 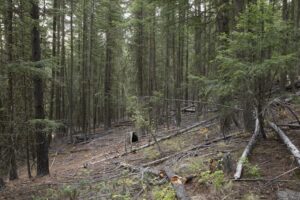 A forest stand in the Virginia Ridge area before it was harvested. SOURCE: The Washington Department Of Natural Resources/John F Marshall

In a lower part of the stand, firefighters were able to do a quick back-burn that morning. In that area, Ryan said, around 90 percent of the trees should survive.

“It showed, to me, what can happen if the right silvicultural practices are done out there on the landscape,” Ryan said.

About a month ago, the Forest Service announced similar results in a forest restoration area that was burned during the Bootleg fire in Southern Oregon.

Forest managers thinned trees and conducted prescribed burns in the area during a short window this spring.

According to the Forest Service, the fire burned at a low intensity, killing some smaller trees but leaving larger timber alive. The Forest Service called these areas green islands within the Bootleg fire.

Ryan said more forest stands in Washington need to be thinned and treated with prescribed burns. Those treatments need to happen on lands managed by the Department of Natural Resources, Forest Service, tribes, and private landowners, he said.

The DNR plans to thin and burn at least 70,000 acres of forest each year over the next 20 years. The timber on the Virginia Ridge DNR trust land generates funds for primary and secondary school construction, Ryan said.

Commissioner of Public Lands Hilary Franz said, so far, forest managers have assessed 3.3 million acres of forest in Eastern Washington and will prioritize when and where to begin.

“We know that the reason we’re seeing these catastrophic fires is that our forests are not healthy. They’re literally like tinder boxes,” Franz said. “All it takes is a spark or a lightning strike that can cause what might have been a small fire when our forests were healthy now becomes thousands and thousands of acres.”

The state’s landowner assistance program helps people implement plans so that their land is more resilient and healthy, Ryan said. When thinning for non-timber harvests, Ryan said people often need to take out whatever looks right and then take out an additional half of what they just thinned.