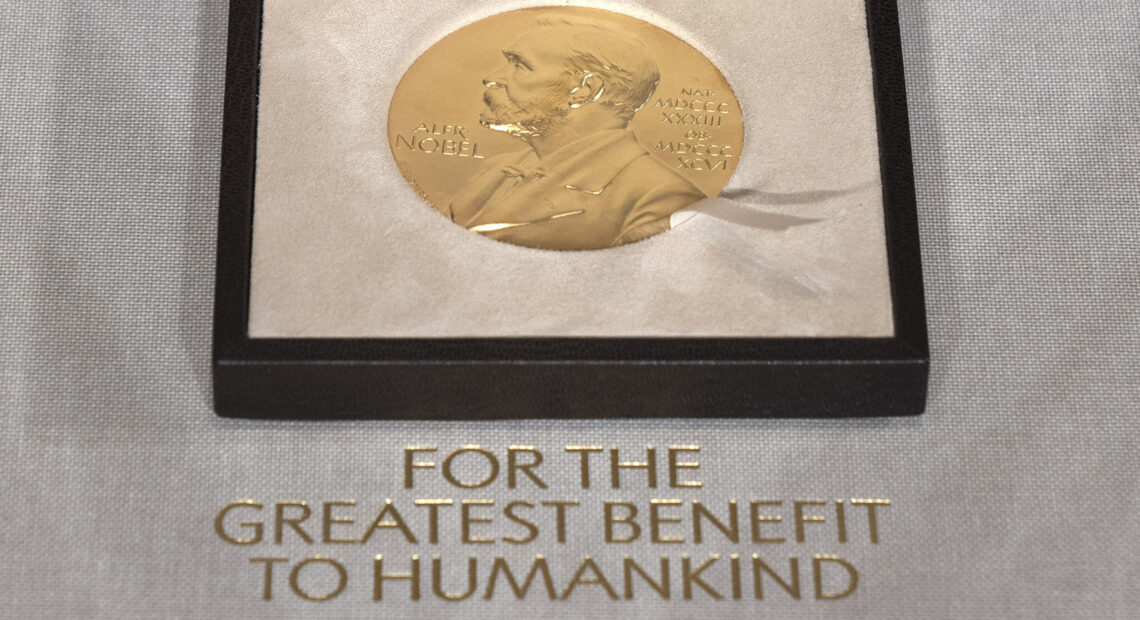 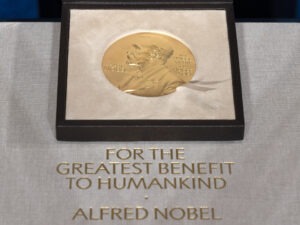 Displayed is a file photo of a Nobel Prize medal on Dec. 8, 2020. The Nobel Prize in economic sciences was awarded to three U.S-based professors for their pioneering work with “natural experiments.” CREDIT: Jacquelyn Martin/AP

Three U.S.-based economists will share this year’s Nobel Memorial Prize in Economic Sciences for their innovative work with “natural experiments” – events or policy changes in real life that allow researchers to analyze their impact on society.

David Card of the University of California at Berkeley will receive half the prize, worth 10 million Swedish kronor, or about $1.1 million, the Royal Swedish Academy of Sciences said on Monday. Joshua Angrist of the Masschusetts Institute of Technology and Guido Imbens of Stanford University will share the other half.

Controlled experiments are common in science and medicine: they allow, for example, to test new drugs by carefully selecting participants and controlling vital aspects to ensure objectivity.

But they are harder in social sciences where it can often be impractical or unethical to conduct randomized trials – unless a real-life event or policy change happens that allow researchers to conduct what are called “natural experiments.”

“Natural experiments are everywhere,” said Eva Mork, a member of the prize committee. “Thanks to the contributions of the laureates, we researchers are today able to answer key questions for economic and social policy. And thereby the laureates work has greatly benefited society at large.”

The impact of the minimum wage 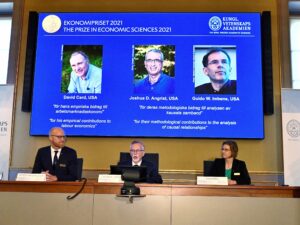 The Nobel Economics Prize committee members announce the winners of Nobel Memorial Prize in Economic Sciences on Monday. David Card, Joshua Angrist and Guido Imbens were given the award for their research of real-life events and policy changes. CREDIT: Claudio Bresciani/TT News Agency/AFP via Getty Images

Card was recognized in part for his groundbreaking work in the early 1990s with the late Princeton economist Alan Krueger, which challenged conventional wisdom about minimum wages.

Economists had long assumed that there was a tradeoff between higher wages and jobs. If the minimum wage went up, it was thought, some workers would get higher pay but others would be laid off.

But when Card and Krueger looked at the actual effect of higher wages on fast food workers, they found no significant drop in employment.

They reached this conclusion by comparing fast food restaurants in New Jersey, which raised its minimum wage, with restaurants in neighboring Pennsylvania, which did not. 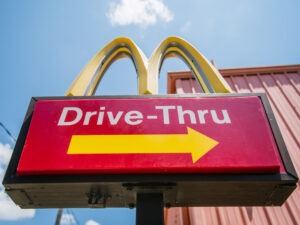 A McDonald’s sign is shown on July 28 in Houston, Texas. One of the winners of the Nobel Prize in economics on Monday was cited for his work in studying the fast food industry to help determine how minimum wages impact employment. CREDIT: Brandon Bell/Getty Images

Meanwhile, Angrist and Imbens were recognized for methodological research that helps tease out cause and effect from these accidental case studies.

During the pandemic, natural experiments have allowed researchers to study the effects of mask mandates, social distancing policies, and supplemental unemployment benefits.

Imbens said he was “stunned” to get the congratulatory wake-up call at about 2 a.m. in California.

“I was absolutely thrilled to hear the news,” Imbens told reporters. “In particular hearing that I got to share this with Josh Angrist and David Card, who are both very good friends of mine.”

He noted that Angrist was best man at his wedding.

Imbens said he had no idea how he would spend his share of the prize money.