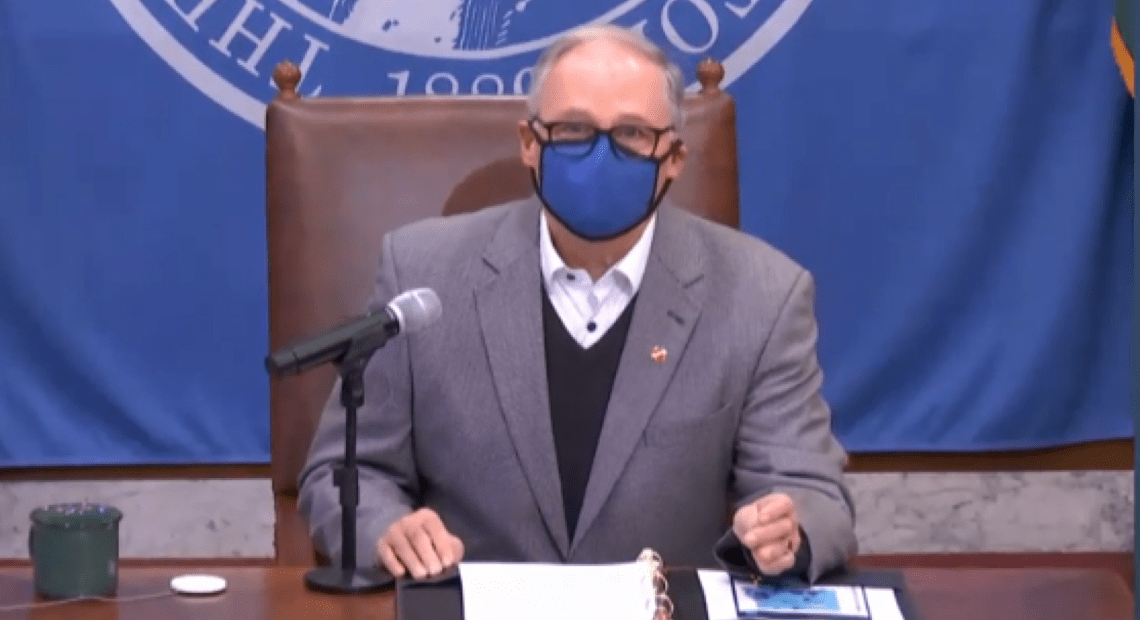 For the second time, Washington lawmakers are suing Gov. Jay Inslee over his use of the veto pen. In a lawsuit filed Monday in Thurston County Superior Court, the Legislature asserts Inslee exceeded his veto power earlier this year when he line-item vetoed parts of the state transportation budget and eliminated a subsection of a low carbon fuels bill.

In the latest chapter of an ongoing separation of powers legal battle, the Washington Legislature has once again decided to file a lawsuit against Gov. Jay Inslee alleging that he abused his veto power.

The litigation stems from line-item and subsection vetoes Inslee made earlier this year when signing into law the state transportation budget and a new low carbon fuel standard, which limits the carbon intensity of transportation fuels sold in Washington to 20 percent below 2017 levels by 2038.

Generally, the governor is limited to vetoing entire bills, entire sections of bills or whole appropriation items in a budget bill.

Last month, in a separate lawsuit, the Washington Supreme Court sided with state lawmakers over Inslee’s previous scalpel-like use of the veto pen, calling cases like this a test of two of the court’s most fundamental duties: “to ‘delineate and maintain the proper constitutional balance between the coordinate branches of our State government with respect to the veto’ and, more broadly, to interpret the constitution faithfully.”

The new lawsuit revolves around Inslee’s veto of a subsection in the low carbon fuel bill that would have delayed portions of the law until passage of a new statewide transportation funding package.

In justifying that veto, Inslee wrote that while the governor is generally limited to full section vetoes, the Legislature can’t design a bill section with the intent of circumventing the governor’s veto authority.

“It strains the imagination to discern any reason for embedding into a single section a delayed effective date that impacts not just that one section but also multiple additional sections, unless that reason is to prevent it from being vetoed,” Inslee wrote in his May veto message.

The governor said those references amounted to a substantive policy change. In their lawsuit, the legislators note the language Inslee vetoed from the 2021-23 transportation budget is the “exact same sentence” he vetoed in the 2019-21 transportation budget, which resulted in the previous lawsuit.

In a statement Monday, Inslee’s office said it was disappointed by the Legislature’s decision to sue again.

“We remain confident that the governor acted within his legal authority with these vetoes. To be clear, current action on climate change is moving forward as a result of the governor’s actions. If he had not acted, the Legislature would be delaying crucial actions on climate,” the statement said.

But legislative leaders on both sides of the aisle presented a united front regarding the decision to sue the governor again.

“We stand with the Governor and support his important work to combat climate change — that’s not what this lawsuit is about,” said Senate Majority Leader Andy Billig, a Spokane Democrat. “This lawsuit is about protecting the authority of the legislative branch and maintaining the balance of power as prescribed by our state Constitution.”

In a separate statement, Senate Minority Leader John Braun of Centralia predicted the Legislature would once again prevail.

“This is not a partisan effort to undermine the governor’s authority. This is a bicameral, bipartisan effort to preserve the Legislature’s lawmaking power. I’m encouraged that all four legislative caucuses are united here,” Braun said in a statement.

The lawsuit seeks to have Inslee’s vetoes invalidated and the language he struck resurrected.

In the previous case, the Legislature prevailed in Thurston County Superior Court before the governor appealed to the Supreme Court. In the court’s November ruling, two justices dissented writing that the “majority shifts the balance of power too far in favor of the legislature.”

Inslee isn’t the first Washington governor to be sued by the Legislature over vetoes. In the 1990s, lawmakers sued Governors Mike Lowry and Gary Locke.