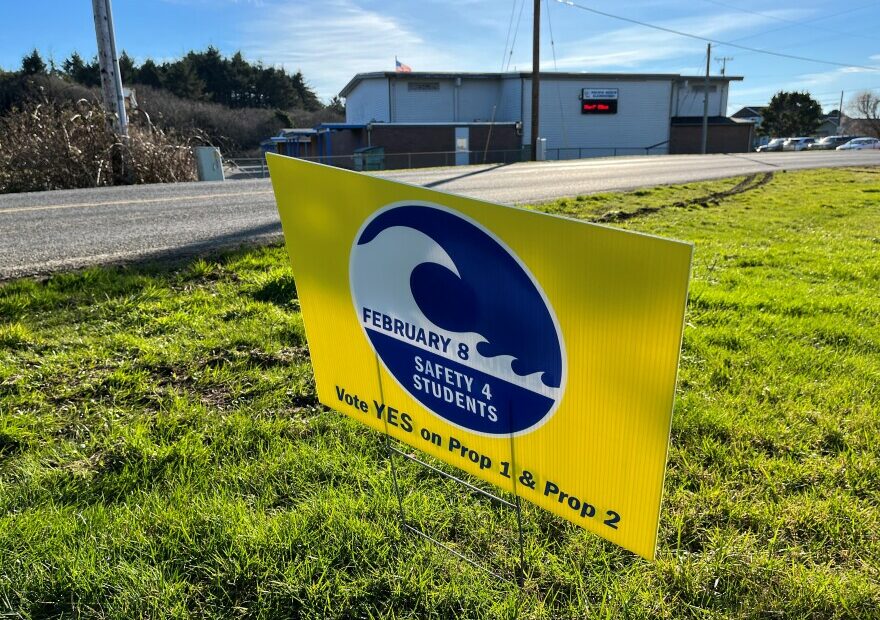 The January 15 volcanic eruption near Tonga was a stark reminder of the threats posed by tsunamis. That’s long been a concern in the Pacific Northwest, where thousands of students go to school within reach of a large tsunami.

Oregon and Washington have been plugging away at retrofitting existing schools to withstand earthquakes. But the burden of relocating low-lying schools falls largely on local taxpayers. A vote-by-mail school bond election now underway in a coastal section of Grays Harbor County, Washington, will test voter appetite to pay higher taxes to build tsunami-safe schools.

Roughly 160 youngsters and their teachers would have around 15 minutes to walk nearly a mile to safety if the next Big One, a Cascadia megaquake, happened to coincide with the school day at Pacific Beach Elementary School. Earthquake and tsunami modelers recently calculated that the low-slung elementary school — built in 1956 about four blocks from the ocean — would be 29 feet underwater in a worst-case tsunami.

“Three years ago, we got a not very exciting call that said we were leading the list in the state for (being) amongst the least safe schools in the entire state of Washington,” North Beach School District Superintendent Andrew Kelly said in an interview in the Pacific Beach school’s sunny courtyard.

The district’s other two schools in the city of Ocean Shores are also in tsunami zones. So, Kelly and the North Beach school board proposed to do what the nearby Ocosta School District in Westport, Washington, did a few years earlier. Also like what the Warrenton, Seaside and Coos Bay, Oregon, districts did, which is to ask their voters to pass a school bond to build new, earthquake reinforced schools on higher ground.

“We’re really trying with a single switch to go from one of the least safe districts in the state of Washington in terms of tsunami and seismic activity to arguably one the safest,” Kelly said.

The superintendent said the district has several options within a roughly three mile radius to relocate Pacific Beach Elementary. But just down the state highway in Ocean Shores there isn’t any suitable high ground inside the city limits. So, the bond proposal includes elevated evacuation platforms to be built on top of new classroom space at Ocean Shores Elementary and over a new performing arts center at the junior/senior high school.

“The idea in Ocean Shores is really to use the best science that we have in the world today and to build two of what we’re calling tsunami refuges,” Kelly explained.

By contrast, Washington state agencies identified 28 low-lying schools in the likely path of a tsunami generated from the offshore Cascadia Subduction Zone. Those schools serve about 7,700 students.

Three of those students belong to North Beach mom Heidi Ross. She said she cast her ballot to raise her community’s property taxes for tsunami-safe schools, including to move Pacific Beach Elementary where she works as the school secretary. Now, Ross nervously waits to see if her fellow voters go along.

“When you live so close to the ocean, sometimes at night you can hear the ocean and it gets louder,” Ross said. “You just think, ‘Oh gosh, is this it?’ sometimes. It’s scary.”

Washington state has lagged behind every other West Coast state and British Columbia in addressing earthquake and tsunami risk to schoolchildren. But that may be changing in a big way.

This month, a bipartisan group of state senators proposed putting a referendum on next November’s Washington ballot. Their idea is to sell $500 million in state bonds to retrofit or relocate unsafe schools over the next ten years, said Seattle Democrat David Frockt, the prime sponsor.

“There’s a critical mass of interest and need,” Frockt said. “We can’t kind of continue to just address this piecemeal. We’ve got to move in a more comprehensive way.”

“The prospects seem pretty good to me that we can get something done,” the state senator added.

Frockt said the proposed state borrowing for school seismic safety, which he called “a little bit extraordinary,” would be paid back with regular general tax collections in the future.

Oregon legislators created a special grant fund way back in 2005 to support seismic upgrades to local schools, hospitals and fire stations. It is funded with periodic sales of state bonds. Over the past decade and a half, the Oregon school seismic rehab program has pushed out more than $450 million to help local districts make their school buildings safer in the event of a strong earthquake. The agency Business Oregon said another $110 million is available for grants in the next two-year budget cycle.

The school seismic safety proposal is getting its first public hearing in the Washington Legislature on Monday. It would call on state taxpayers to pay for up to two-thirds of the cost to relocate or shore up vulnerable, old schools. Local taxpayers would still need to put some skin in the game by contributing locally-raised dollars. That has been a problem in some tax-averse communities where school districts have been unable to muster the will or money to take action.

It took two tries before Seaside, Oregon, voters passed a bond measure in 2016 to relocate three schools out of the tsunami zone. The low-lying community recently began sending all its K-12 students to a combined campus on a hilltop at the edge of town.

At the northwest tip of Oregon, the Warrenton-Hammond School District passed a $38.5 million bond measure in 2018 to buy land to relocate all of its schools to a new master campus on high ground. The district’s new middle school, the first of three planned school relocations, opened there this past fall. Warrenton area voters will have to pass another bond measure, or two, to raise the funds to move the high school and elementary school out of the tsunami zone.

School officials said it takes careful planning when asking voters to approve of local funding measures. “You’re really mindful of bond capacity,” said Warrenton-Hammond district superintendent Tom Rogozinski, speaking about his caution about going back to the voters to ask for more money too soon.

Rogozinski said he wants to see economic growth that increases the property tax base to have the assurance the community can afford another school tax. The upshot is that the high school and elementary students will probably continue to attend schools inside the tsunami inundation zone for perhaps another five to seven years — eight to ten years on the outside — he said in an interview Friday.