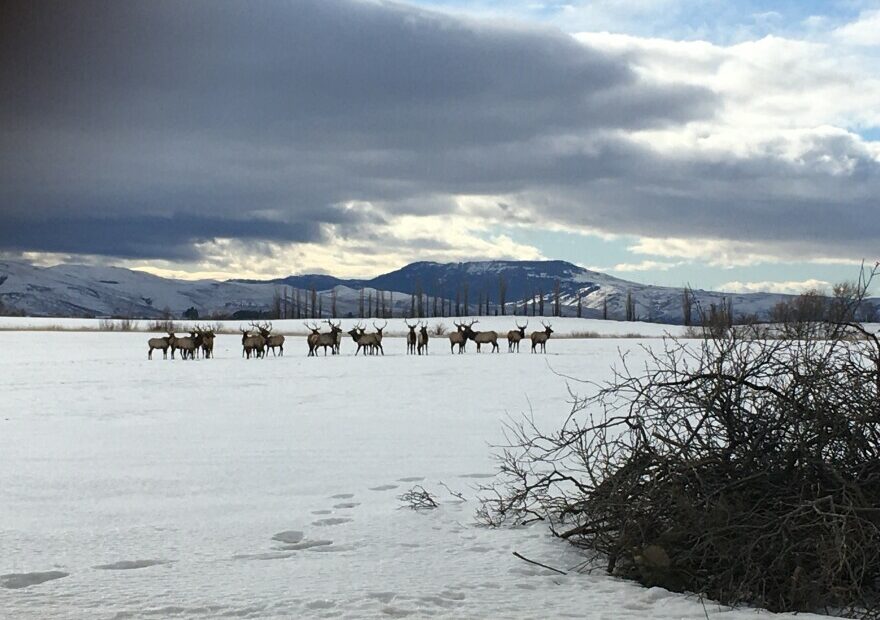 Gangs of wild elk are attacking farmers’ haystacks in Washington and Oregon. They’re hungry, after a long drought and record mountain snow this winter has driven animals down to the lowlands. Climate scientists say things may only get worse in the future.

Anthony Leggett’s farm is nestled in the foothills outside Anthony Lakes in eastern Oregon.

He grows pasture grass and beardless barley and puts up big stacks of hay to earn extra money for his young family. Leggett’s farm costs include equipment, chemicals, fencing and fertilizers. But haymakesmoney.

“Your hay is your paycheck,” Leggett says. “That’s how you pay your bills, that’s how you support your family. And they just take it. You know, they’re animals – that’s what they do.”

He says it’s a frustrating situation and he does his best to safely haze the animals.

“[But] you know, if I chase them off my property, they just go to the neighbor’s property and get into their haystack,” Leggett says.

Across the West, widespread drought has left elk, deer and even wild turkeys hungry and in poor condition – even a bit desperate.

Wild elk are even attacking farmers’ haystacks in Washington and Oregon. Record snow across much of the Northwest’s mountains hasdriven animals downto the lowlands – in gangs. And climate scientists say things may only get worse in the future.

Hay, prices are up

Joey McCanna spends a lot of his winter teaching hay growers and ranchers how to build elk-proof electric fencing.

“The other big thing we have going on, that we have staff kind of running frantic on, is we have a lot of elk damage,” McCanna said on a recent wildlife management Zoom. “Elk getting into hay stacks is one of the big ones.”

McCanna is an expert on resolving wildlife conflicts with humans for the state Department of Fish and Wildlife. He teaches farmers how to set up automatic propane cannons to haze them with noise. But elk are smart – and sometimes it doesn’t always work.

This year, drought has upped the stakes –hay prices are upacross the West.

“This summer was very hot and dry. And alfalfa and grass hay is at a premium right now,” McCanna says. 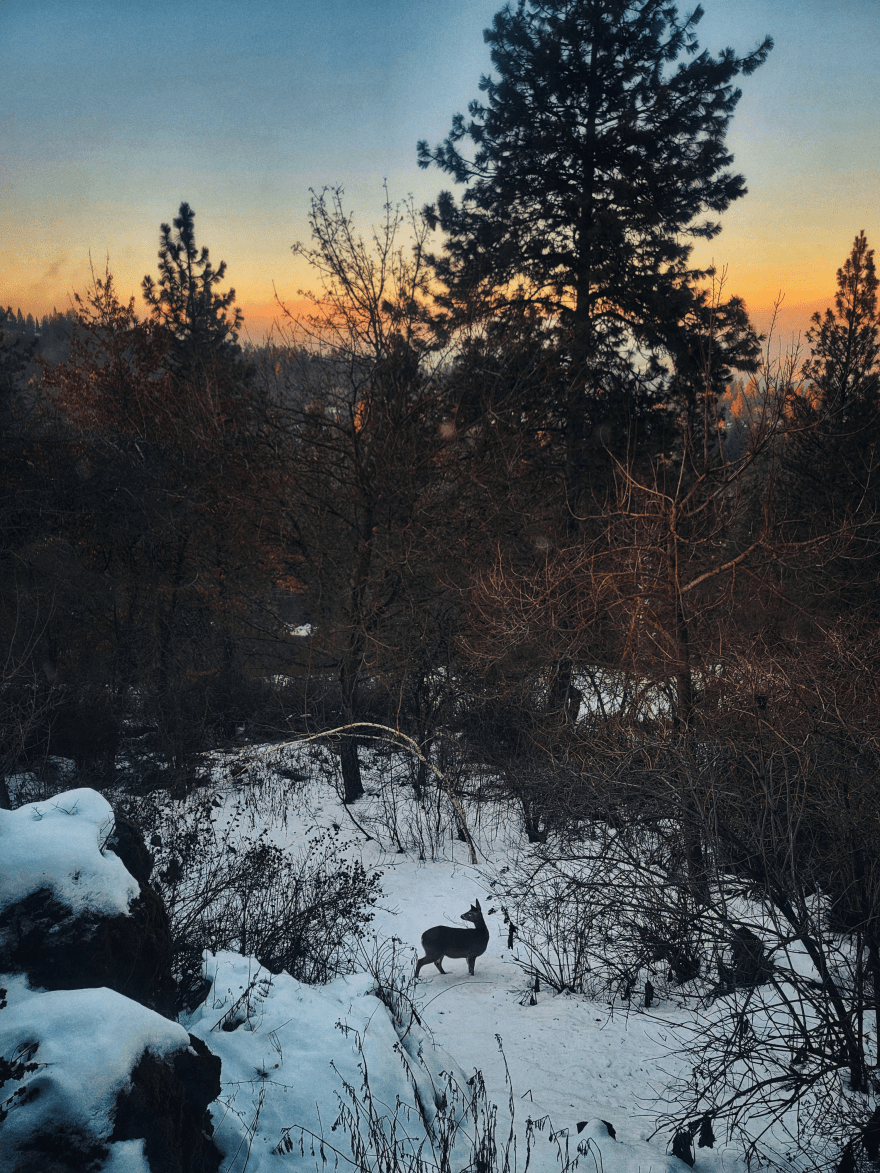 A deer forages through a neighborhood on the outskirts of Spokane at sunset. Deep snow in many parts of the Northwest have driven animals out of higher elevation range toward farms and haystacks. Photo Courtesy Of Rajah Bose.

“So, one of the primary ways that wildlife respond to changing climate is by moving,” Krosby says. “They shift their ranges – they want to track the change in climate as it happens.”

She says now more than ever before, animals will need to move quickly. Climateinduced floods and firesin the Northwest are dramatically pushing animals around on the landscape. She says wildlife will needsafe corridorsto run for it.

“They have to move so fast, but they have all this stuff in the way,” Krosby says. “They have roads and highways in the way, they have cities in the way, agricultural areas. And all of these form these barriers to wildlife getting to where they need to go to shift their ranges to adapt to climate change.”

Starving with a belly full of hay

Elk have four chambered guts that change their bacteria with the season and what’s available to eat. In the spring and summer, bacteria colonies adjust to digest green shoots and high-protein feed. But, in the fall and winter gut bacteria are essentially programmed to eat big quantities of dried twigs and grasses with a lower energy.

“It’s a bacteria that all ruminants carry in their guts, it’s just you don’t want that clostridium to get out of control,” Gillin says. “And it’s when you throw corn in there, it starts to have a party.”

In this case, the corn is hay.

The bacteria break down the walls of the stomach and intestines, so an elk can starve to death with a belly full of alfalfa. 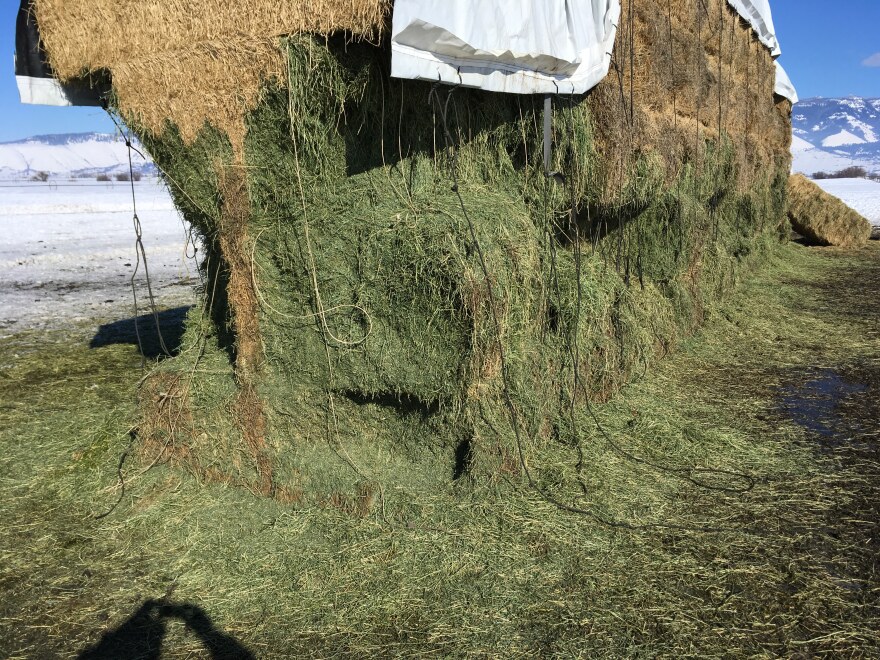 Elk can undercut a haystack by eating at their neck height, destabilizing the bales. Many commercial bales can weigh more than one ton each. Sometimes those destabilized bales can fall on the animals and kill them.
Photo Courtesy Of Peter Nilsson.

A vendor motions to a passing farmer, “Hi, ya, how you? Enjoying your day so far?”

Clint Vieu is from Walla Walla. He’s with a major tarping services company called ITC Services out of Moses Lake. He says one solution for growers is to install “elk curtains” which are tarps covering the sides of big stacks. Left unprotected Vieu says, “Stacks have fallen on elk ‘cause they’ll eat into it so much that it will actually destabilize the stack and it will collapse and fall in on the animals.”

Every year, elk bust up Anthony Leggett’s fences to get to his hay and crops. And every year, he fixes them again.

“You know if I chase them off my property, they just go to the neighbor’s property and get into their haystack,” Leggett says.

Still, Leggett has made his peace with the elk.

“We just happen to live in a spot where there’s a trail that they come down on,” he says. “For us, it’s life.” 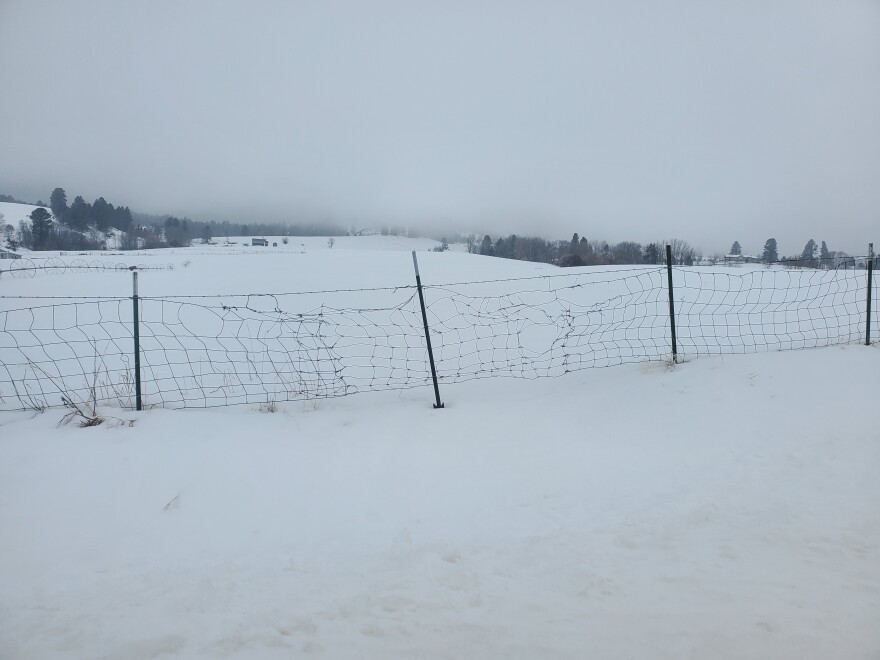 Fences on Anthony Leggett’s farm near Anthony Lakes, Oregon, have to be repaired repeatedly throughout the year because big herds of elk knock them down.
Photo Courtesy Of Anthony Leggett.