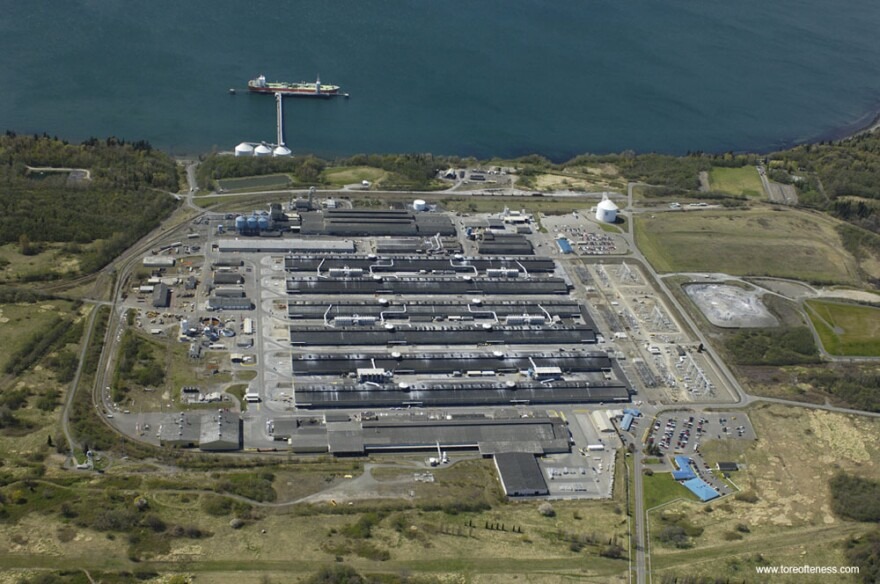 A complex deal is taking shape to revive the Pacific Northwest’s last remaining aluminum smelter. Alcoa idled its Intalco Works smelter near Ferndale, Washington, a year-and-a-half ago and laid off virtually all the workers there. The plan to bring this industry back involves a new owner, cash from taxpayers and an uncertain new contract for cut-rate wholesale power.

“This funding to modernize… at Intalco will be critical to the reopening of the smelter and to the restoration of more than 700 high-wage union jobs, not to mention the thousands of additional jobs and the economic activity which the facility will help support throughout the state,” former Alcoa worker Brian Urban said in testimony to a state legislative budget committee in January.

Labor leaders, local elected officials and economic development advocates from Whatcom County are urging the state Legislature to approve two budget line items put forward by Democratic Gov. Jay Inslee. Combined, they would have the state spend $10 million to upgrade the Intalco smelter to improve efficiency and greatly reduce pollution emissions. That works out to a public subsidy of about $14,285 per job created.

“It will enable Intalco to produce ‘green’ aluminum, one of only two plants in the U.S. which can do so,” Urban said.

In its glory years during the latter decades of the 20th century, aluminum making was a pillar of the Northwest’s industrial economy. An abundance of cheap, public hydropower supported ten large aluminum smelters in Washington, Oregon and Montana. But when power prices crept up around the turn of the century and global competition stepped up, one by one they all winked out except for the Alcoa smelter north of Bellingham.

In spring 2020, Alcoa announced it was mothballing — “curtailing” in industry-speak — its Ferndale operation due to weakening demand and falling metal prices. Soon thereafter, aluminum prices rebounded and they are now approaching a decade high. Late last year, Alcoa said it would restart curtailed capacity at its smelters in Brazil and Australia.

Alcoa spokesman Jim Beck said the Pittsburgh-based aluminum giant is keeping the Ferndale smelter idled because of numerous shortcomings that limit “its competitiveness for the long term.”

“First operational in 1966, Intalco would require significant capital investment for a potential restart,” Beck wrote in an email. “We appreciate the Governor’s continued support to make resources available that would potentially aid in those efforts.”

A restart seems destined to take place under new ownership, if it happens. Port of Bellingham commissioners have been briefed several times in public sessions about how Alcoa is weighing an offer to sell the 56-year-old smelter. At the commission’s January 18 meeting, the port’s economic development director, Don Goldberg, identified New York City-based private equity firm Blue Wolf Capital Partners as the prospective buyer. Goldberg said that Blue Wolf communicated a desire to bring back all the jobs that were lost in 2020.

Blue Wolf Capital did not respond to a request for comment. On its website, the firm said it focuses on turning around “distressed” companies and “unlocking value” while following environmental, social and governance (ESG) principles. ESG, or responsible investing, is currently a hot trend on Wall Street.

In an interview with public radio, Larry Brown, president of the Washington State Labor Council (AFL-CIO), said many former Alcoa workers stuck around the area and would come back to the smelter if given the option.

“A substantial number of the folks would be available for rehire,” Brown said. “While there are lots of (other) jobs up there, you have to get maybe two or three of those jobs in order to equal the earning power of just one of these unionized aluminum workers.”

“There’s a lot of momentum in getting this done,” Brown said about the interlocking negotiations underway.

State Senator David Frockt (D-Seattle), the lead writer of the state capital budget, confirmed in an interview that lawmakers are favorably inclined to allocate money toward the smelter revival.

“It is essentially a cleaner way to produce the products that are produced up there,” Frockt said. “It is a labor and climate change alliance that is driving this and I think there is a very good chance that we will be funding that project.”

The sale of the smelter and the injection of public money to upgrade the plant innards are key pieces of the revival plan, but there’s a critical third factor that could make or break the deal. That would be securing an affordable source of electricity to restart the power-hungry smelter.

Population growth and economic expansion across the Northwest have turned low-cost hydropower into a finite resource. Alcoa long purchased electricity directly from regional wholesaler Bonneville Power Administration. That relationship grew contentious at times as BPA tried to finesse the Ferndale smelter’s demands for gobs of power with competing requests from public power utilities who wanted to serve that juice to multitudes of other customers.

BPA spokesman Doug Johnson said the Portland-based regional power agency was in the early stages of negotiating with Blue Wolf’s representatives and that it was too early to know how things could turn out.

“We are continuing discussions, but BPA has made no decision regarding potential service, contract terms and conditions or BPA’s involvement in electric service to the plant,” Johnson said in an emailed statement.

Johnson said BPA terminated its last contract to supply Alcoa with wholesale power at the company’s request months before the Ferndale smelter was indefinitely shut down.