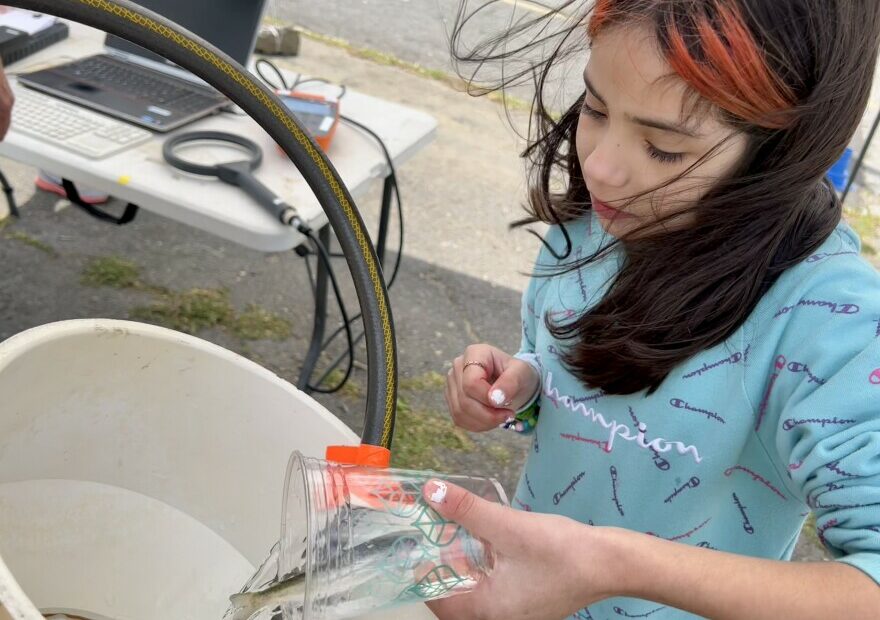 For four months, fourth grade students at Cascade Elementary School in Kennewick watched as salmon in their classroom developed from a transparent egg – the kids could see the eyes of the salmon even before it hatched to a salmon fry, ready to migrate downstream.

Now, these students are learning how researchers will track young fish on their journey down the Columbia River using what’s known as a PIT tag, or Passive Integrated Transponder. 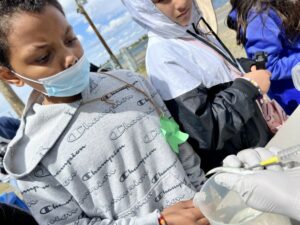 The students watched, wide-eyed, as a team of scientists from Pacific Northwest National Laboratory injected fish tags into chinook salmon.

The event is the capstone after around 3,000 students raised young salmon in their classrooms. Rearing the salmon opens the door for each student to be a little more curious, Little said.

These fish tags at the PNNL station will help researchers track each fish throughout its life. When fish pass by receivers, often placed near dams, the receivers pick up an ID number unique to each fish, like a digital fingerprint.

“It’s kind of like a needle that you use to tag the fish. The tags are really small. They can tell you if your fish survives,” said Jade Ramirez-Medrano, 9. 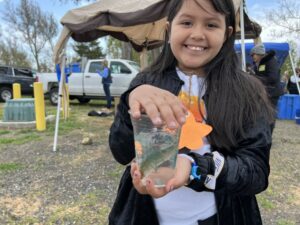 Jade Ramirez-Medrano, 9, a fourth grade student at Cascade Elementary School in Kennewick, shows off a chinook salmon shortly before she releases it into the Columbia River. CREDIT: Courtney Flatt

Each child ushered a fish through the tagging process, which biologist Jill Janak explained to the students.

“The first station is anesthesia. That’s going to put the fish to sleep, kind of like if you were going to get surgery. The fish isn’t wiggling, and he doesn’t feel anything when we put the tag in him,” Janak said.

Then, the scientists inserted tags into the now sleepy fish.

At the next stop, the biologists measured and scanned each fish. Jade touched the belly of the 122-millimeter chinook she’d just watched implanted with a fish tag, which is roughly the size of a grain of rice. 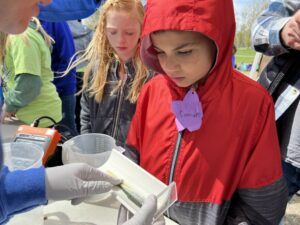 As her fish recovered, Jade took a small plastic cup, filled with water and another rambunctious juvenile chinook, which was about the size of an adult’s finger. She headed to the next area to release the fish into the Columbia.

Jade placed her hand over the top of the cup to keep the fish inside as she walked.

“I can feel his tail fin and his head,” she said. “My favorite part was just when you get to feel the fish. It looks so cool. I usually never get to see it up close like this.”

A few feet away, the PNNL researchers set up a funnel hooked to a hose to help release the fish into the water. A tube connected to the funnel and slid the fish another 20 feet into the water.

“He’s splashing. Getting you wet?” said Ben Vaage, a researcher at PNNL. 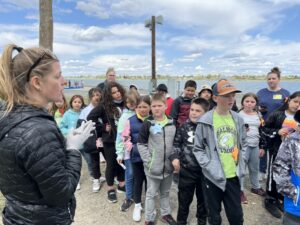 “Just pour the water out, and it will go right down that tube,” Vaage said.

“There it goes, down the slide,” Vaage said.

And the fish began its journey roughly 280 miles to the ocean.

Pacific Northwest National Laboratory live streamed the tagging station for classrooms across the state to watch, which more than doubled the number of students who could participate in the event, Little said. 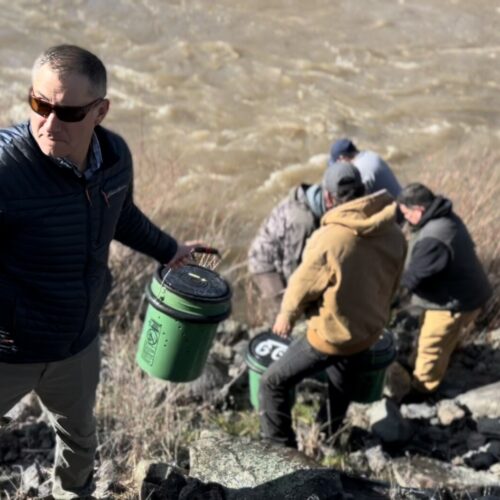