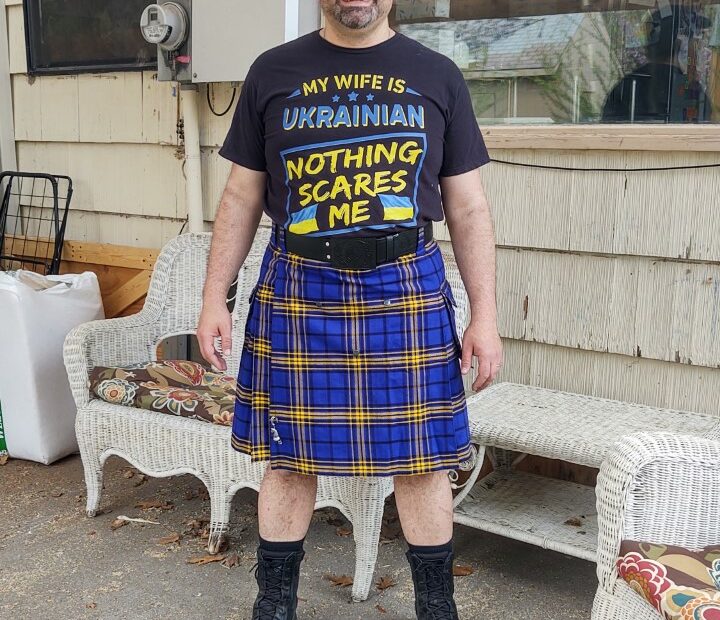 Couple Designs Kilt To Raise Money In Support Of Ukraine

For Lidiya Clear, Ukraine and its people are always at the top of her mind and heart.

“I’m Ukrainian. I’ve lived in this country for quite a few years, but my soul, my mind, everything is in Ukraine, especially since  the war broke out,” Clear says.

When the war in Ukraine began earlier this year, Lidiya and her husband, Kelly, who live in Ephrata, Washington, began thinking of ways to support organizations helping people in Ukraine.

Kelly had an idea to help – he thought of his Scottish ancestry and his love of kilts. A computer programmer, Kelly downloaded a program that allowed him to put designs together, and Lidiya, who does weaving and other fabrics arts, improved the design with her artistic flair.

The result is a dark blue, yellow and black design called “Under Ukrainian Skies.”

“Ukrainian flag is blue, blue for sky and yellow for the fields of wheat. We made the blue a little darker, just because I always say Ukrainian skies are a bit stormy right now. And then again, your yellow is for the wheat … And then the black is for the soil that grows the wheat.”

The Clears partnered with UT Kilts, and they are now using the design on multiple products. 30% of the proceeds are being donated to Youth With A Mission in Ternopil, Ukraine, a nonprofit, Christian missionary, that Lidiya says has turned to humanitarian efforts since the war started.

The other 70% goes to materials and manufacturing of the kilts, according to the Clears.

Lidiya hopes to travel to Ukraine later this year to help in any way she can.

“I just felt like I just need to put my feet on the ground there and see what the Lord says,” Lidiya says.

She still has family and friends in Ukraine, some of whom she has been unable to reach during the war.