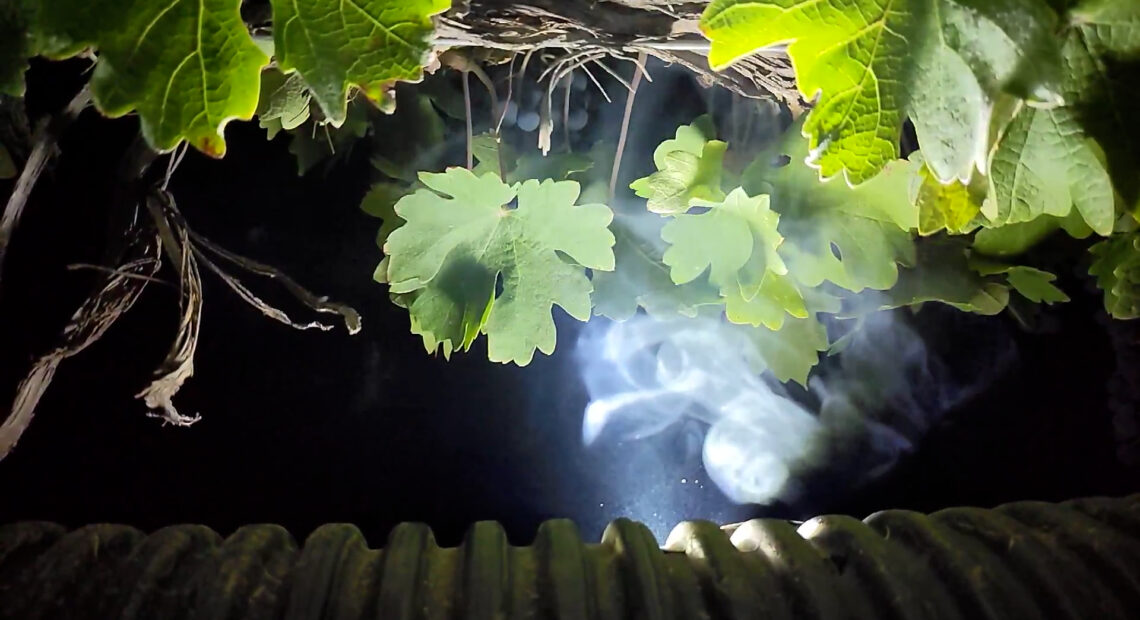 In 2020 Western wildfires gave the grapes grown for wine in the region an ashy and smokey taste. This year, Washington is expecting a record harvest, but vintners are still figuring out the best way to deal with the impact of smoke. Regional Correspondent Lauren Paterson has more. (Runtime 3:54)

“And we’ve decided to pick a block of Malbec today…”

It’s harvest season across much of the west. But the wine grapes in Washington are late – by about two weeks.

“So we’re gonna go check out how the picking’s going.”

We’re at the Red Mountain American Viticulture Area, looking out at more than 2,000 acres of vineyard vines and grapes that are ready – or nearly ready – for harvest. 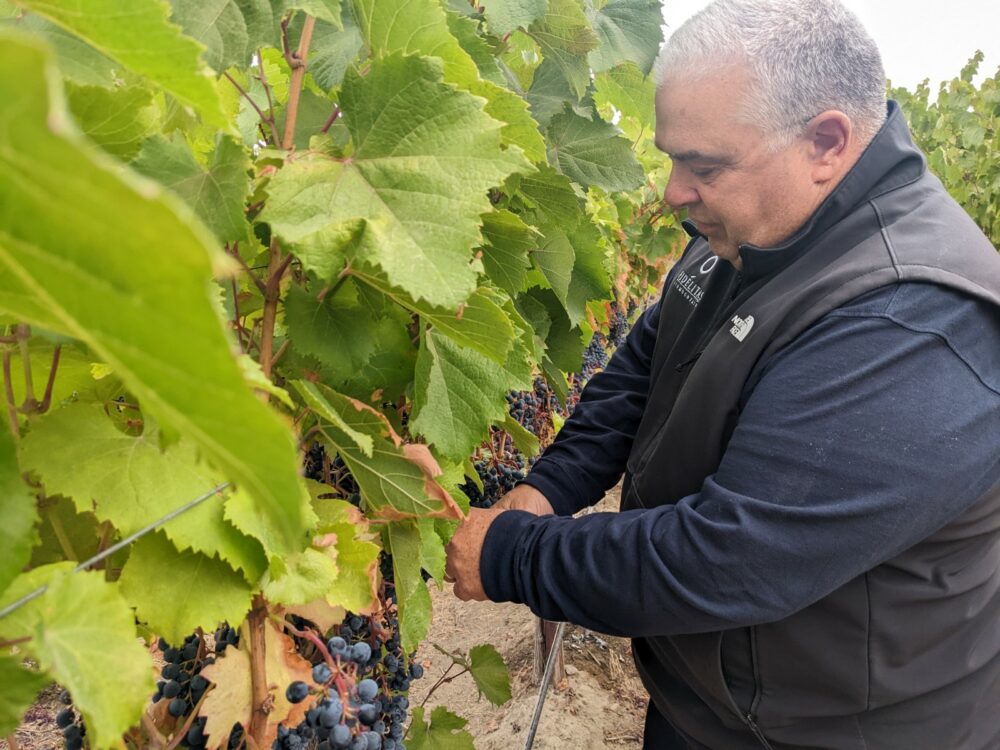 “The crop was heavy, but there was still, like, a lot of green berries and green clusters sort of left behind. And this latest is really unusual. I don’t think I’ve ever seen that,” says Hoppes.

Growers like Hoppes had many challenges to deal with this season – from record-breaking heat, little rain – and smoke from nearby wildfires.

That smoke can seep into the fruit, giving the wine produced from them an ashy and smokey flavor. While they haven’t been as bad this year, the wildfires of 2020 blanketed states across the West.

“We had a week in September, there, were we didn’t see the sun. And it’s always a concern,” said Hoppes. “And having, you know, WSU, and Tom Collins, and right here has helped us a lot trying to tackle the issue.”

In his office at Washington State University’s Wine Science Center, professor Tom Collins is preparing for his next enology class. He’s studied how smoke exposure affects grapes for years, and just submitted the team’s most recent findings to the journal Nature.

There are 17 researchers working on the issue of smoke-exposed wine grapes between UC Davis, Oregon State University, and WSU. Collins said he worked closely with OSU’s lab for testing these smoke flavor causing compounds. 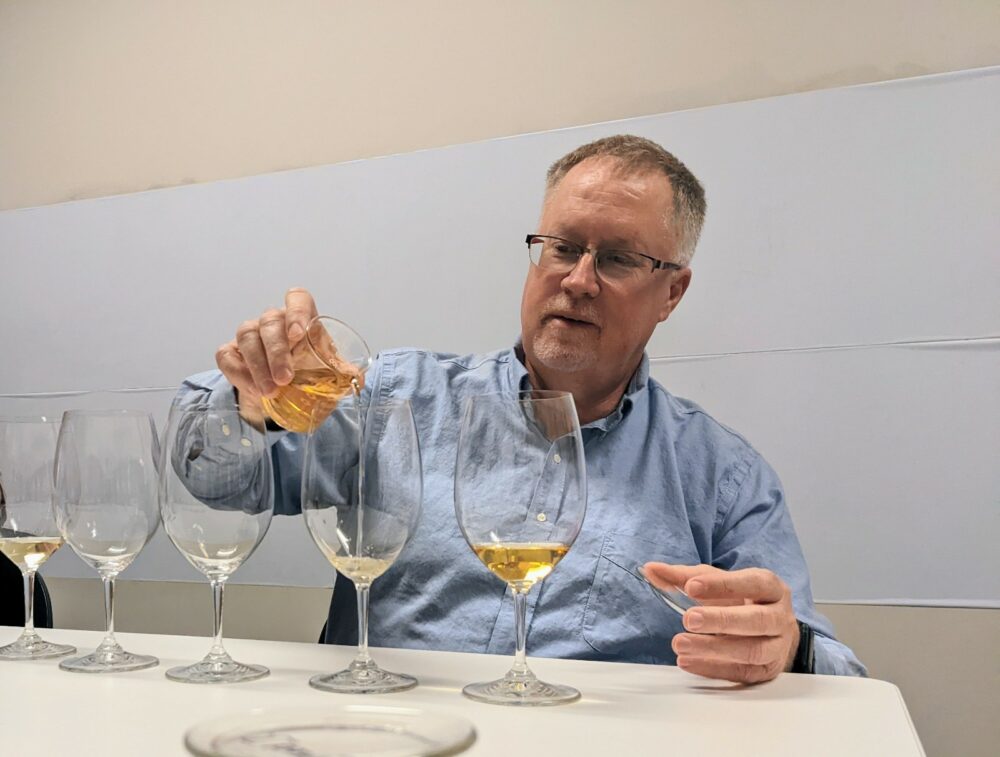 “In a nutshell, what this first paper is to say is, we’ve identified this class of compounds, and we think we know how they get there,” said Collins.

And if you know what causes the smokey flavors, he says scientists can work on how to remove them from the wine.

Back at the Fidelitas winery, enologist Rebecca Albert had to do a lot of work to mitigate the damaged grapes from the 2020 vintage. But removing the smoke compounds is a delicate balancing act.

“So you’re also kind of tasting what the wine and the juice tastes like to be like, well, I can use this yeast on it. Well, the sugars are really high. So the alcohol is going to be really high, I can’t use this. So there’s a lot more like decisions to be made with numbers, but also with tastes,” said Albert.

Creating blends of different grape types was one way winemakers salvaged the 2020 harvest. Fidelitas winemaker Mitch Venohr is glad the researchers have made strides in identifying the smokey compounds – but…

“Now the next big question is, how do we specifically remove those from wine? Or are there things that can be done in the vineyard to prevent those smoke compounds from getting into the grapes?” 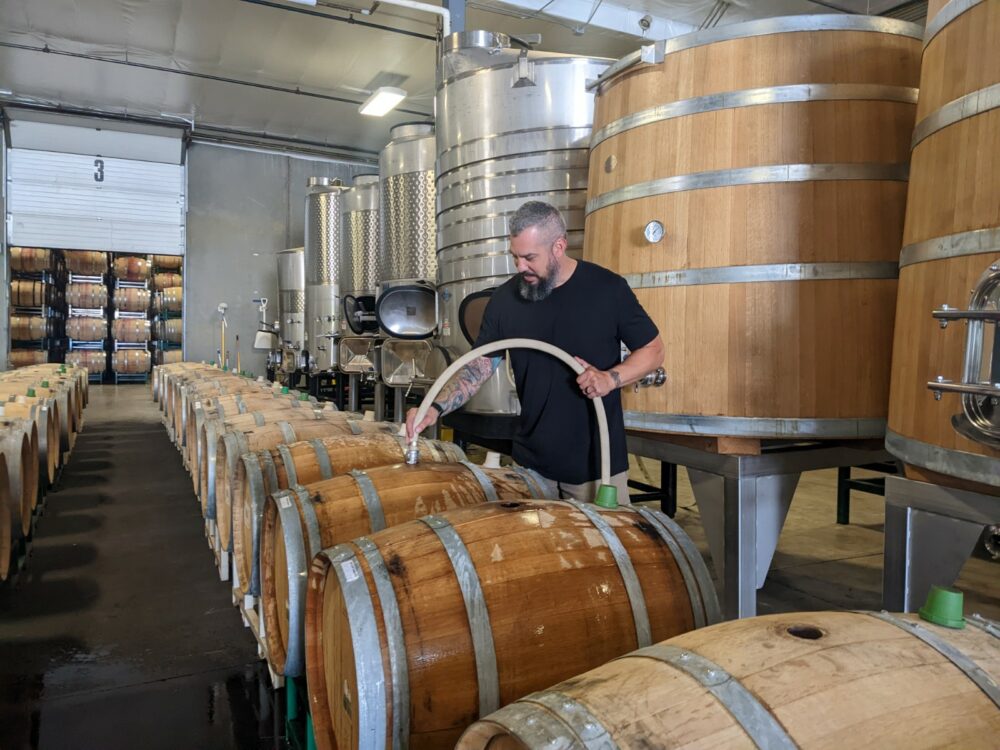 Winemaker Mitch Venohr soaks some wooden wine barrels to prepare them for wine. Barrels are hydrated to tighten the wood and prevent leaking.

Tom Collins has some thoughts on that too.

Most of us are familiar with the Air-Now-dot-gov website to check air quality during wildfire season. He said a lot of those sensors are in towns, to assess risk to human health.

“Because of topographical differences, wind direction, we think it’s important to have sensor networks that are in places where agriculture is happening,” said Collins.

The sensors monitor weather conditions, the location of wildfires, and make predictions about where the smoke might end up. This could help growers better prepare and make decisions about when to harvest wine grapes. 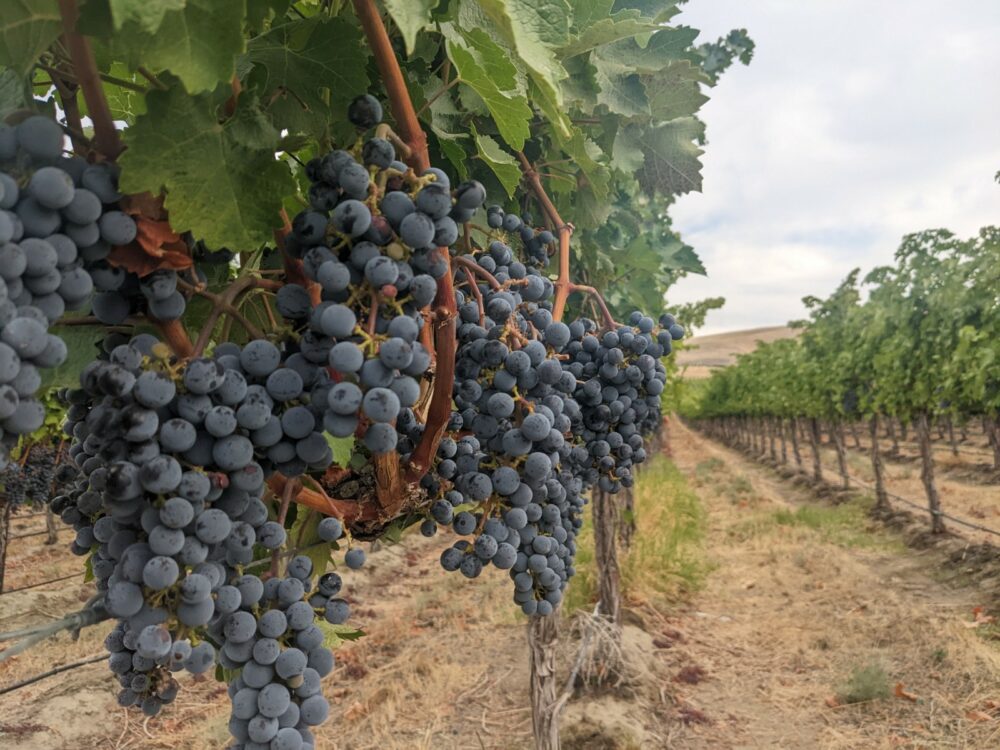 Nearly 100 sensors are spread throughout vineyards in California, Oregon, and Washington.

“So up and down the Yakima Valley, Lake Chelan Wahluke Slope, Royal Slope, Walla Walla – we’re hitting all the major growing areas, we’ll have some down in the Columbia Gorge, later before the season ends,” said Collins.

The goal, he said, is to have as many people as they can looking into the issue – and coming up with the answers the industry – and wine drinkers – are looking for.