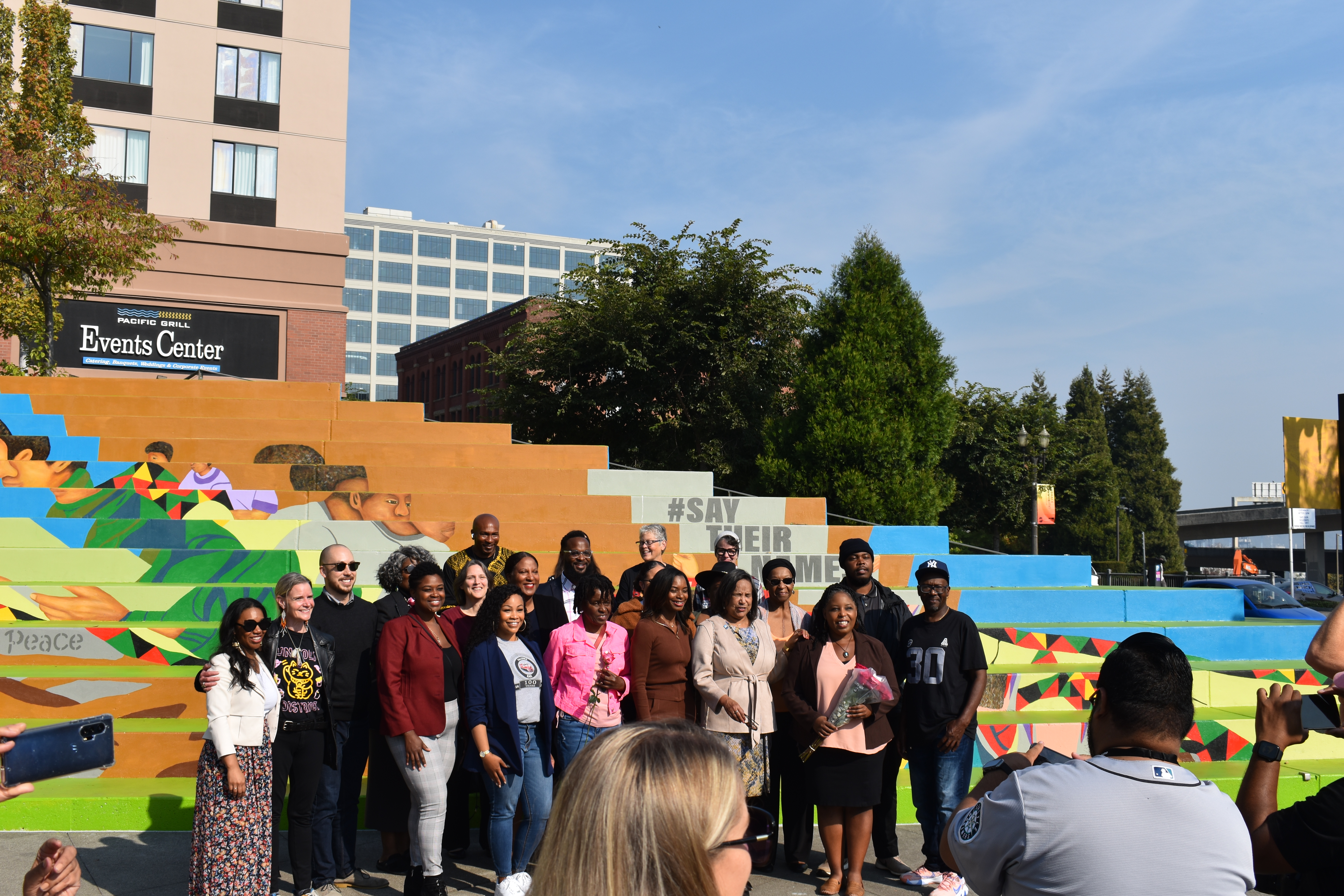 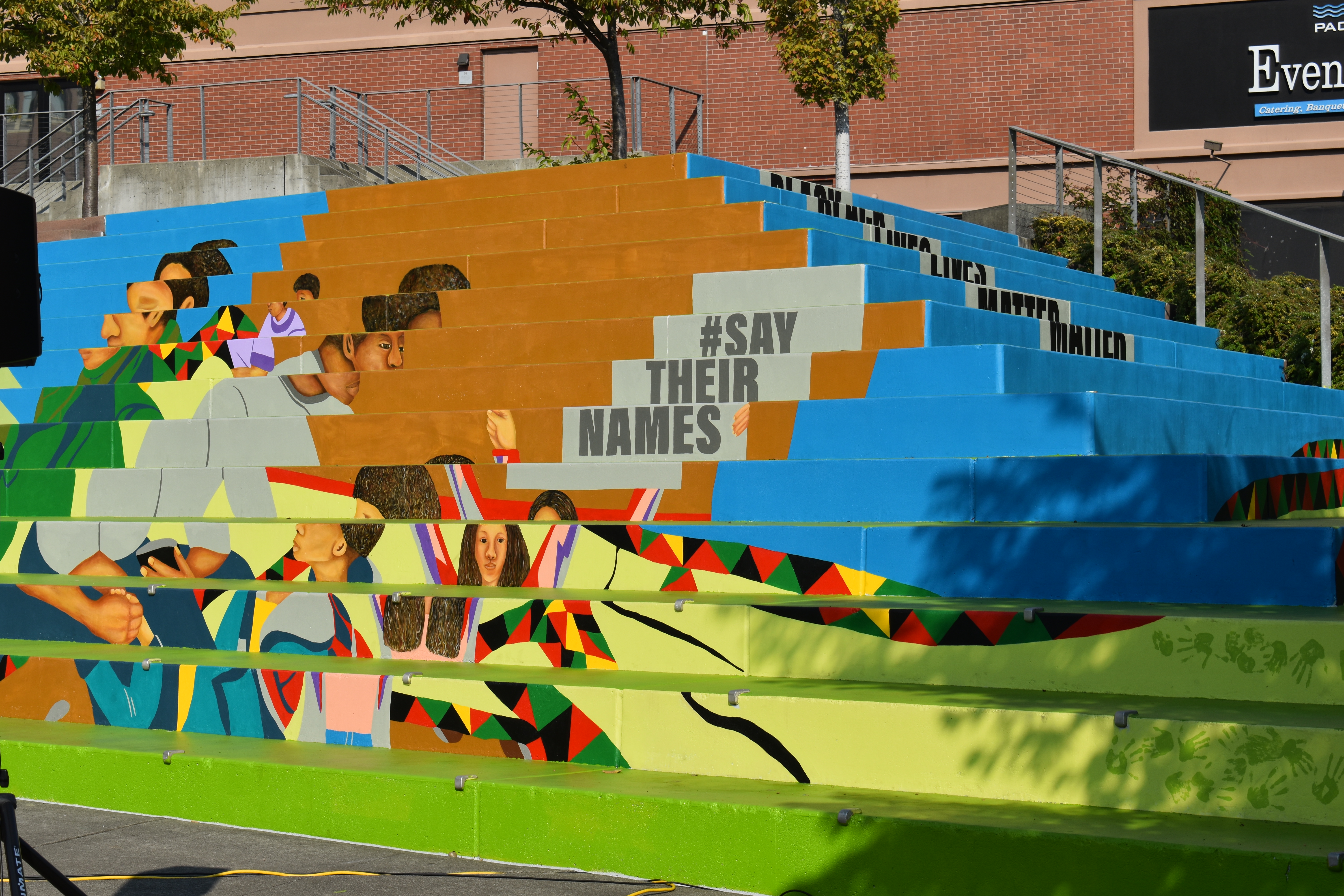 The mural cascades down the steps of the plaza and from different viewpoints, it reveals different faces, messages and meanings. The challenging space makes the viewer work to absorb the mural — something lead-artist Dionne Bonner wanted.

“You have to work at actually seeing it. But that’s important to me. Because as a Black woman and a Black woman, in general, there’s a lot of intersectionality with how I navigate my world, and how I’ve had to, in light of racism, in light of lots of different isms,” Bonner said. “When you have to walk through this mural and see it in different ways, [it] kind of gives an idea of how it is to live, and an experience of what someone might go through.” 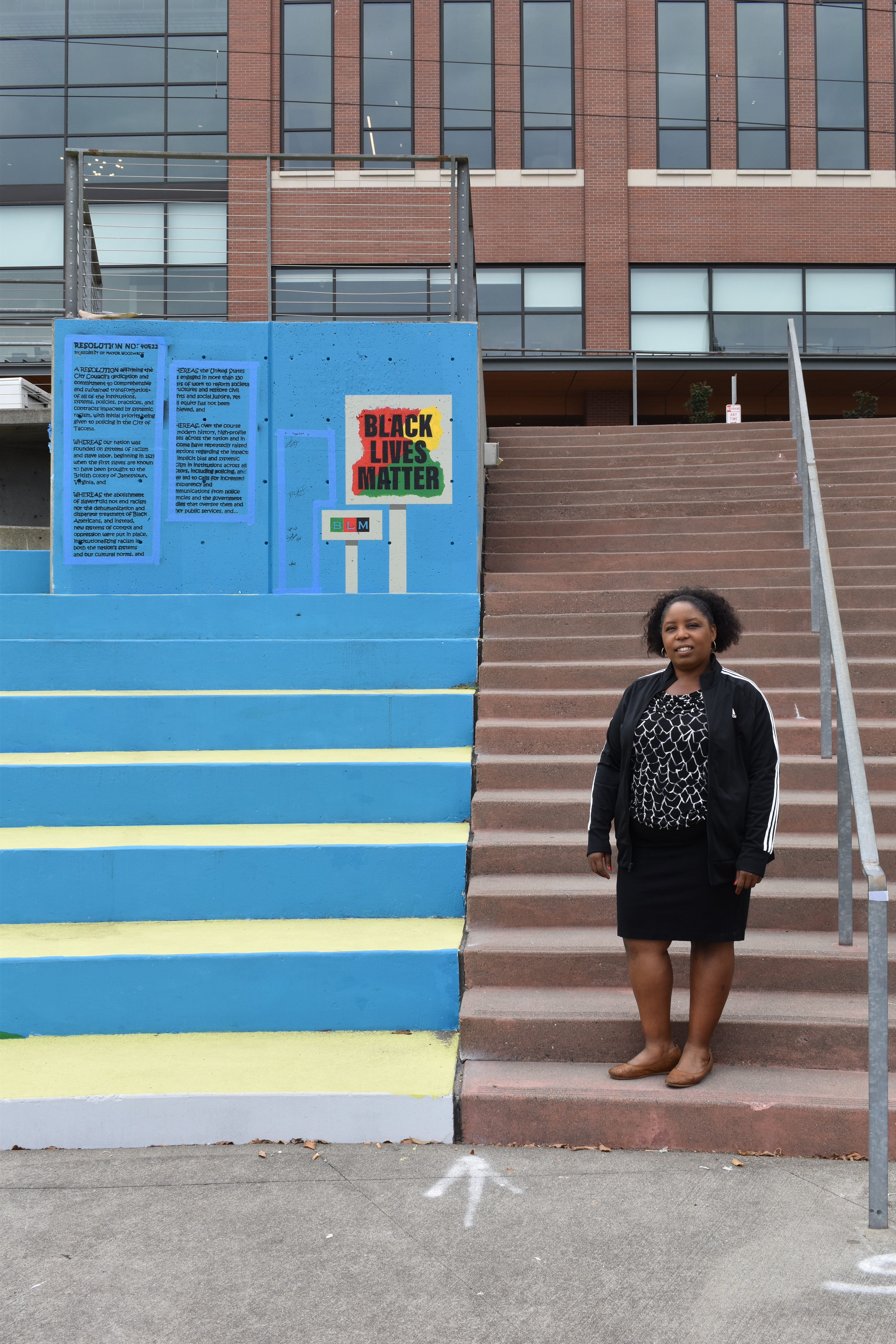 Lead-artist Dionne Bonner stands next to a portion of the mural, which shows the resolution by Tacoma’s city council on their commitment to anti-racism. Photo by Lauren Gallup.

Last Friday, a handful of elected officials, arts organization representatives and Bonner announced the completion of the new mural in Tollefson Plaza.

Mayor Victoria Woodards led the speaker lineup by expressing appreciation for the momentous day this was for the city.

“What you see before you really is an opportunity for the Tacoma City Council, and the city staff to visually show our support of our anti-racist work,” Woodards said.

Woodards referenced the 2020 unanimously-signed resolution 40622 of the city’s commitment to anti-racism.

“That is our commitment as a council, and for this city, to be anti-racist, and to call it out in such a way that everyone understands that we have to not just be quiet, but we have to be vocal and loud,” Woodards said.  “And we have to show those in our community who look like me today that their lives matter.” 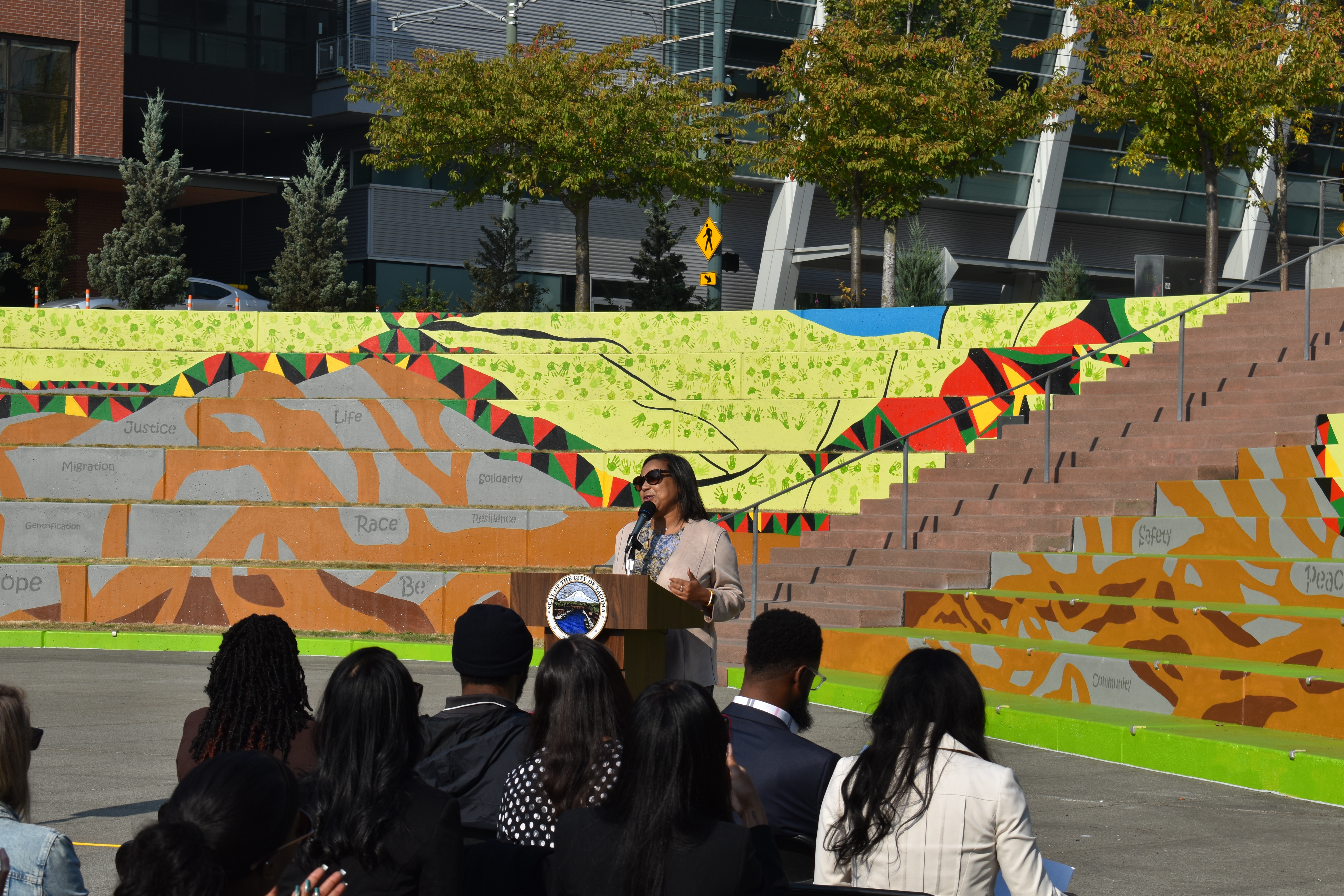 Mayor Victoria Woodards addresses the crowd at the mural’s dedication on Oct. 7. Photo by Lauren Gallup.

Artists painted a portion of the resolution written by Woodards into the mural.

“He said when the day of judgment arrives, we will have to repent not for the acts of the bad but the silence of the good,” Jinkins said. “We in Tacoma will not be silent, good people. We will not. We will speak out, we will act, we will create art. We will create community. We will do everything that we need to do to make sure that there is absolute belonging in the city.”

Her comments were met by thunderous applause and cheers.

Council Member Keith Blocker spoke on the work the city has been undertaking to reconcile past race relations, including the Tacoma Chinese Reconciliation Park, Japanese Language School Memorial and removal of the inauthentic totem pole at Fireman’s Park.

“This mural was just one more example of the city demonstrating reconciliation,” Blocker said.

Blocker then affirmed the city’s dedication to addressing inequity facing Black people, saying “Tacoma is the place that this can happen in the truest sense.”

The Tacoma Human Rights Commission spearheaded the effort to get the city to create a Black Lives Matter mural, selecting Bonner as the lead-artist on the project.

Bonner shared her heartfelt gratitude to a number of people who made the mural possible.

“This plaza is expansive, and I could not have completed this mural by myself or this project, in the time that it was completed by everyone,” Bonner said. “Many people went on this journey with me, and I want to thank them.”

The Black Lives Matter mural project was a collaboration across Tacoma. Artists Kenya Adams, Danielle Jordan, Gwen Jones, and Chuck Taylor came together with Bonner to bring the mural vision to reality. 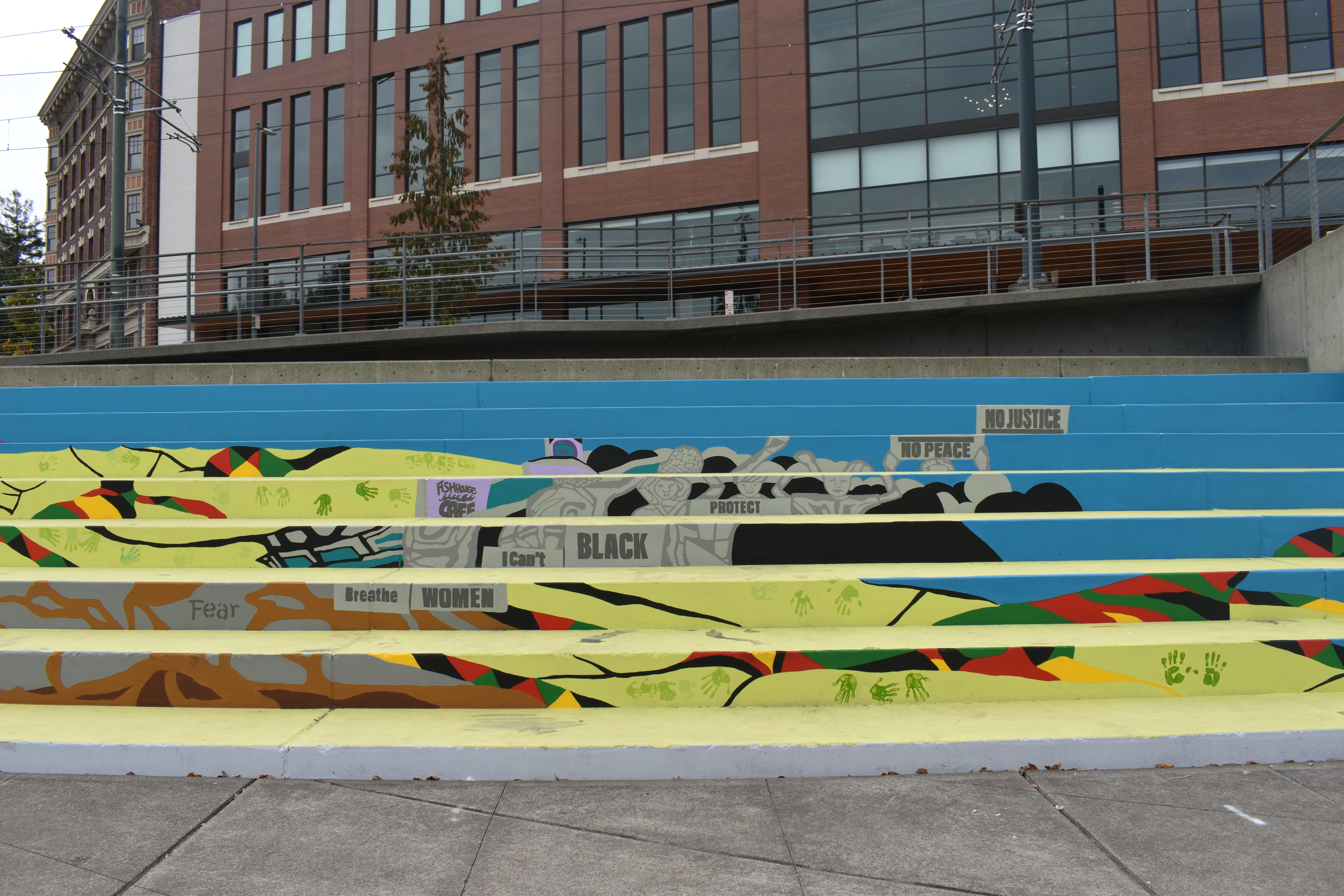 Another portion of the mural, with protest signs reading “No Justice No Peace,” “Protect Black women,” and “I can’t breathe.” Photo by Lauren Gallup.

A mural crafted by many hands

After being selected as lead-artist on the project, Bonner wanted to facilitate conversations in the Black community that would inspire the work. She, alongside co-artist collaborators, created surveys asking Black community members about their experiences and observations.

Questions like: “What does Black Lives Matter mean to you?” “When did you first experience racism in your lifetime?” and “How did you get here to the Pacific Northwest?” solicited responses that the team drew from in their creation.

These surveys inspired Bonner to create an image of a tree across the space, symbolizing growth and connection.

“The tree really represents this idea of community and our togetherness, and how we’re rooted,” Bonner said in an interview with NWPB earlier this fall. 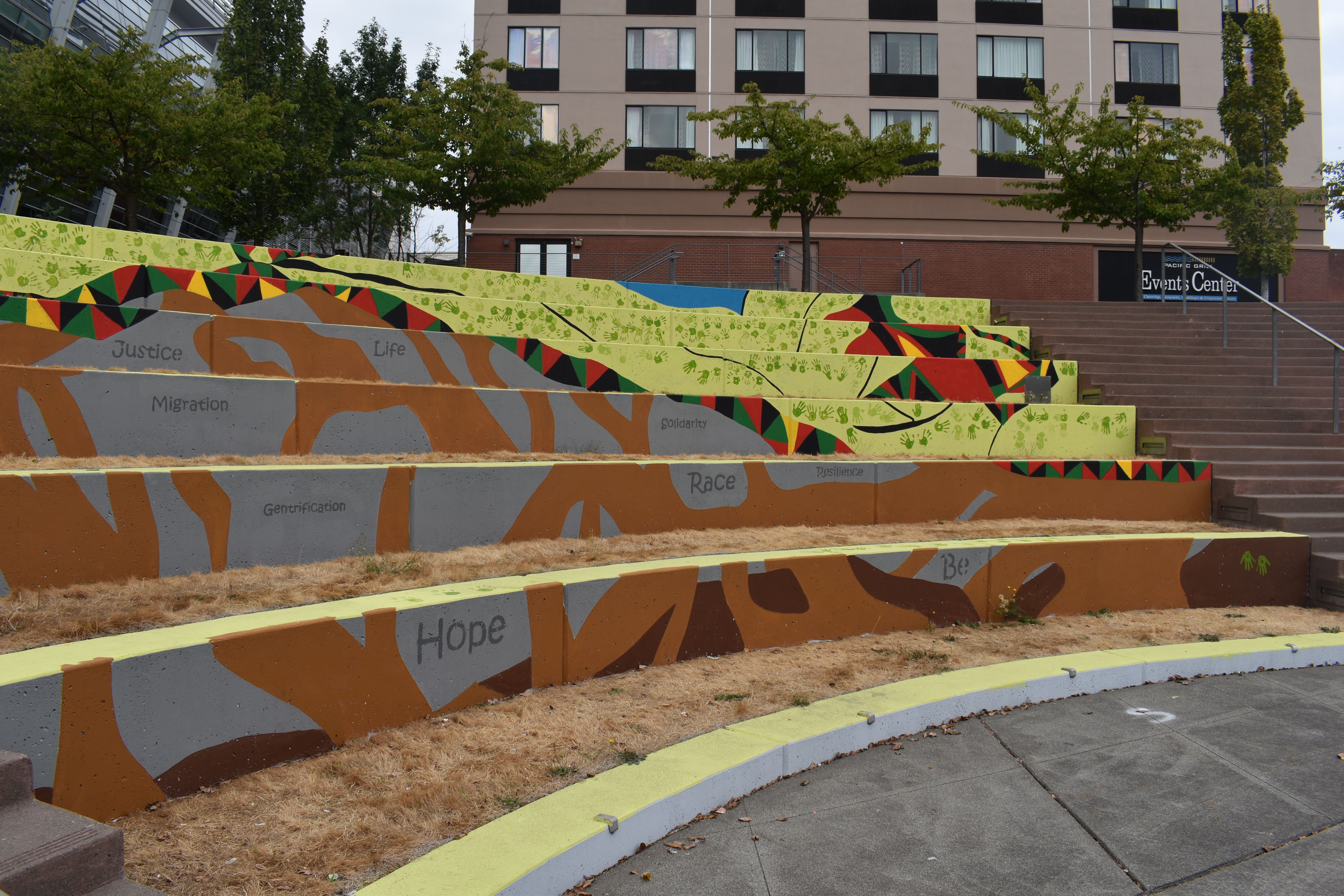 Tree roots are filled with words like “safety,” “fear,” and “joy,” to reflect experiences and feelings of Tacoma’s Black community. Photo by Lauren Gallup.

Within the roots of the tree are painted words that Bonner said came from the surveys. Words like “joy” and “fear.” Bonner decided to paint the words in the roots, because she said these experiences and histories often live underneath the surface for people everyday, like the roots of a tree. Viewing the mural, the words are clear across the space and Bonner said this was a way to bring these experiences to life and conversation.

A painted quilt blankets the entire space in green and yellows, reds and blacks. This was a nod to the history of quilt-making in the African-American community as a way to communicate messages with each other that others could not decode. Quilts can relay messages and keep shared histories alive, Bonner said.

“The other thing that a quilt to me symbolizes is a covering, and a protection and a comfort,” Bonner said.

Within the quilt are different shades of green handprints. These are the hands of community members who joined the mural artists for a community painting day, where all were welcome to come and add their hand print to incorporate the community into the design process.

“I wanted the quilt to be an opportunity for people to make a commitment to say, ‘Yeah, I stand for equality, I stand for equal justice, I stand for doing the right things and holding people accountable for their actions, especially in positions of power and authority,’” Bonner said.

The impetus for the city to create this mural was to represent the Black Lives Matter movement — there’s protest signs throughout the piece that read, “I can’t breathe,” “#SayTheirNames” and “Protect Black women.” Bonner said she wanted the mural to represent Black life, culture and history in Tacoma and surrounding cities.

“Throughout this mural, there’s images of youth, and elders, education and history, and our connection to each other,” Bonner said.

The core of the Black Lives Matter movement has been to spread the message that Black lives have been needlessly taken away, as well as to protest the structures, entrenched in bias and systemic racism, that have led to this.

“The Black Lives Matter movement is about affirming our humanity as a race, and really celebrating that and remembering that we have to hold our elected officials, our organizations, our systems at work, responsible, and each other,” Bonner said.

She acknowledged the different reactions people might have when viewing the mural.

“Some of these words are hard to look at, because they touch you in different ways, depending on your experiences,” Bonner said. But with that pain, Bonner hopes the mural opens up more discourse among the community.

“I’ve heard people say they don’t want to talk about race, but you should want to talk about things that affect you,” Bonner said.  “I want my work to be a catalyst to some kind of conversation that maybe might get someone to another place of understanding or enlightenment or helping people change their mentality about race and race relations.”