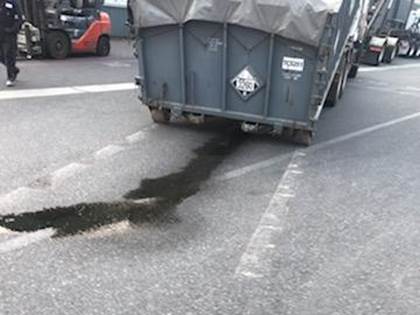 The Washington State Department of Ecology issued a $37,000 fine last week to a hazardous waste transportation company for failing to report a corrosive material leak.

On Aug. 12, 2021, Clean Earth discovered a leaking waste container at a metal galvanizing company in Seattle. The container was leaking a type of sulphuric acid, similar to battery acid. While workers noticed the leak, tried to clean it up, and moved it off site, they did not initially report the leak to the Department of Ecology.

Legally, hazardous waste leaks onto the ground must be reported immediately to the regional Department of Ecology office.

This leak could pose a risk to human health and the environment, said Erich Ebel, communications manager for the department’s Hazardous Waste and Toxics Reduction program.

Clean Earth employees tried to clean up the leak in Seattle with absorbent material, like kitty litter, Ebel said. They also put a tarp underneath the container. Then, workers moved the leaking container to another location across the street, where it sat overnight.

“But again, at no point did they notify the Department of Ecology,” Ebel said.

According to a press release, the container was near Seattle’s Burke-Gilman trail in an area accessible to the public and close to a known encampment of people experiencing homelessness.

Clean Earth told the department that it will challenge the penalty. The company has 30 days to file an appeal with the Washington State Pollution Control Hearings Board.

Clean Earth did not respond to multiple requests for comment.