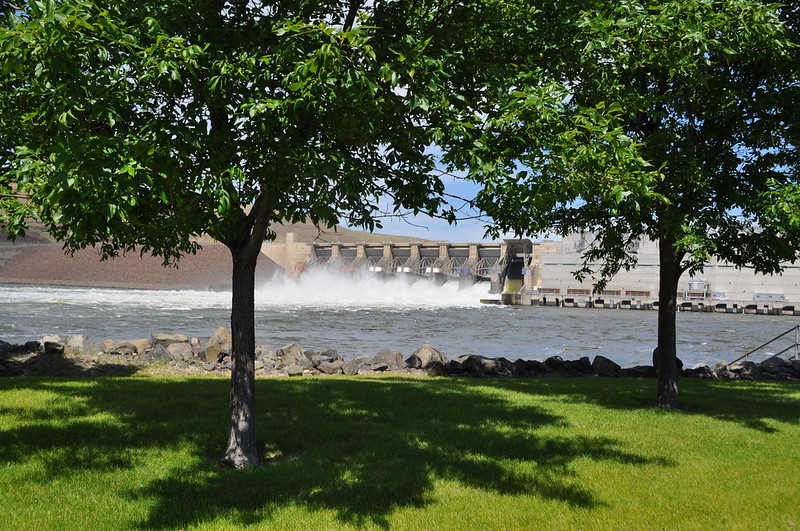 From 300 to 600 gallons of oil leaked into the Snake River from a turbine system at Little Goose Dam, according to the Army Corps of Engineers. Oil leaks at dams are a problem environmental advocacy groups have fought in court to stop – a problem leaders at Columbia Riverkeeper said still needs more oversight and accountability.

“For decades, the hydroelectric dams on both the Columbia and the Snake rivers have repeatedly released oil into the river systems without any consequences and without a concrete plan and actions to catch the oil releases much earlier than what’s playing out right now on the Snake,” said Lauren Goldberg, executive director with Columbia Riverkeeper.

The oil leak at Little Goose Dam went on for 90 days, according to the Corps, a timeline that Goldberg called unacceptable.

However, the oil leak happened in an unusual way that wasn’t caught by the Corps oil monitoring system, said Dylan Peters, a spokesperson with the Walla Walla District of the Corps.

Typically, an oil monitoring system, which manages the supply, drain and storage of oil at the dam, would alert staff to a potential leak, Peters said.

Instead, the oil leaked back into the turbine oil conveyance system’s governor, which regulates the oil monitoring system, Peters said.

“Because the oil was leaking back through the system into the turbine itself, it wasn’t giving us the normal readings that you would look for for a potential oil leak. Moreover, it wasn’t creating a sheen on any water, which is a physical indicator that you can observe with the eye that water or that oil is getting into the waterway,” Peters said.

After the leak was discovered, technicians installed an oil boom to collect any additional oil. No oil sheen was visible in the water, according to the Corps.

In a news release, officials with the Walla Walla District of the Corps said staff work to respond quickly to oil leaks.

“Our team at Little Goose Dam took appropriate actions to remove the turbine from service, assess and contain the leak. The turbine will remain out of service and isolated from the river until repaired,” said Paul Ocker, Operations Division chief for the Walla Walla District, in a news release.

Now, Peters said, engineers will audit the dam’s oil system and make recommendations to improve the transfer of oil. In addition, what happened during this leak will be incorporated into the Corps’ leak accountability system in what Peters called a lesson learned.

“We do everything possible to mitigate risks and prevent such leaks. But even under the best circumstances, oil is difficult to contain and costly to clean up once it does start leaking and entering waterways,” Peters said.

In 2014, Columbia Riverkeeper settled a lawsuit against dam managers to reduce chronic oil pollution leaking from eight dams into the Columbia and Snake rivers.

In an emailed statement, Bill Dunbar, a spokesperson with the EPA, said the Corps is keeping the EPA informed about the oil leak investigation.

“EPA is continuing to gather information regarding the incident before determining if the spill violates the terms of the new Clean Water Act permit for the dam facility. EPA will conduct a follow up inspections at the dam in the near future,” Dunbar said.

This is the first major oil leak since the EPA issued the permits, Goldberg said.

This most recent oil leak at Little Goose Dam is the first major leak since the EPA’s discharge permits set standards of no more than 5 milligrams per liter released into the river per day.

“This amount of oil pollution is not sanctioned by the Clean Water Act, and it really flies in the face of the critical need to protect clean water and salmon and steelhead in the Snake River,” Goldberg said.

Moreover, Goldberg said, it’s disappointing that oil leaks at dams have yet to be solved, calling it another reason to remove the four Lower Snake River dams. Groups supporting dam removal have said that’s the best way to protect wild salmon runs on the Snake River.

“These dams that are alleged to be so clean and green on a regular basis release, in some cases, really large amounts of oil. If it was coming from an individual corporation, it would never be acceptable,” Goldberg said.