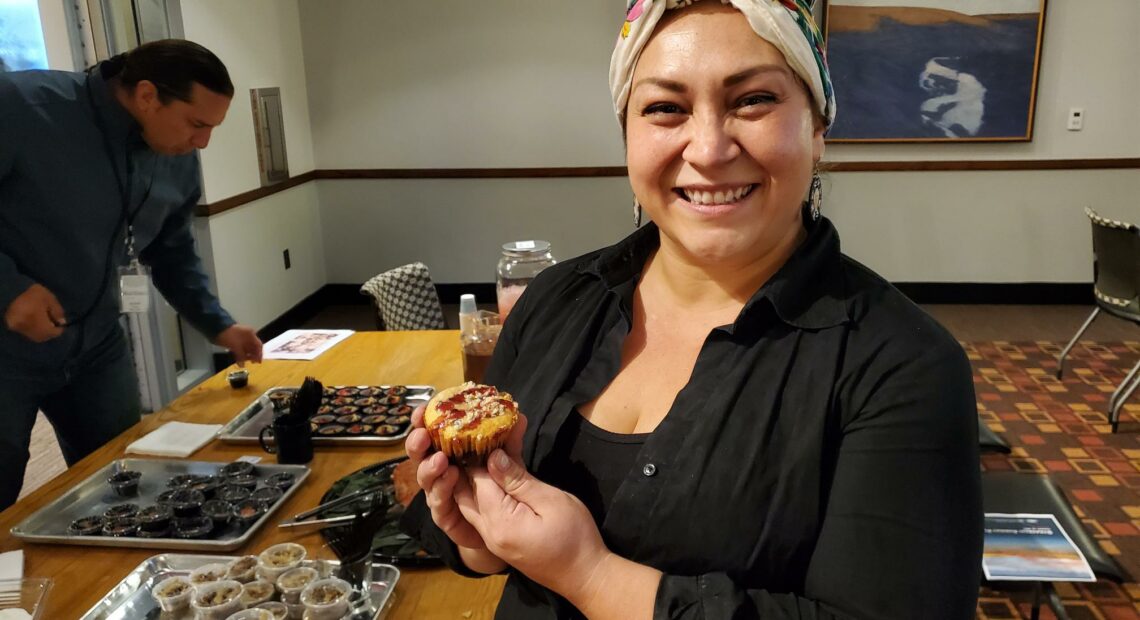 Now, the department is recognized around the country, said Don Sampson, executive director of the Confederated Tribes of the Umatilla Indian Reservation and hereditary chief.

“Our tribes (are) one of the recognized natural resource leaders in the country today. And if you look at the four Columbia River Fish Commission tribes  – Yakama, Warm Springs, Umatilla, Nez Perce – we’re as big as any state fishing game agency in the country. That’s how powerful our people are today,” Sampson said. 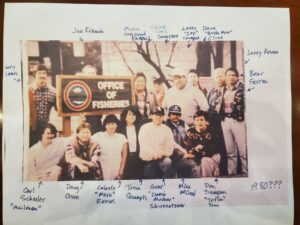 About 60 people listened in as Sampson spoke Tuesday at the department’s anniversary celebration.  Sampson was one of the first employees in the tribe’s Department of Natural Resources. 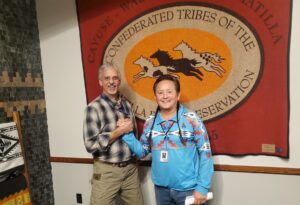 Gary James and Don Sampson. Both have worked for the tribe’s Department of Natural Resources since the beginning of the agency. CREDIT: Dori Luzzo Gilmour

Under Sampson’s leadership, the department began sending tribal members to train as biologists, which he said helped the department combine modern science with the historic practices.

For almost 20 years, the department has used culturally important first foods as a model for sustainability, Sampson said. The tribes has an obligation to care for the land, he said. 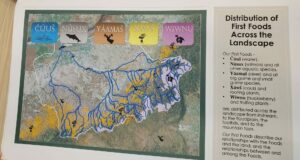 “In the beginning of time when the earth was made, (Creator) told us  – the Natítayt people, the Indigenous people, the Willapum, the Umatilla, the Cayuse, the Willoopah – that we have an obligation. The Creator made the land, made the water and brought all these foods, all of these plants, all of these things for us to enjoy. We have a very sacred relationship,” Sampson said. 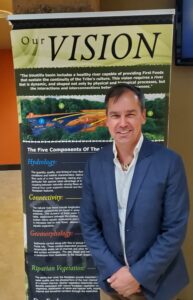 The concept of the First Foods Program was developed in 2006 by Eric Quaempts, the Department of Natural Resources director.

“One day in my 30s, I was thinking about the serving order of the first foods, and I saw that the relationships among the foods is ecological and also spatial relationships on the landscape,” Quaempts said.

Moreover, the Native community recognizes this relationship with the landscape, he said.

“It’s been around for thousands of years. It’s an informed understanding of the landscape, and it reflects community values. So, why not organize our management around first foods?” Quaempts said.

That’s when he said he decided to model the department’s management on the specific first food serving order. In the serving order, each meal starts and ends with the most important element: water. Then, the meal moves on to fish, big game, roots, and berries.

“When we serve the foods in that order, we’re reminded of that creation belief, and that promise they made, and it reminds us of our reciprocal responsibility to care for the foods,” he said.

In its program, like in meals, the Department of Natural Resources begins with water, restoring river passages, refilling aquifers, improving water quality, and recognizing problems with climate change and pollution.

Next comes programs for fish, including restoring fish and habitat, harvesting in traditional fishing areas, and improving fish survival rates. 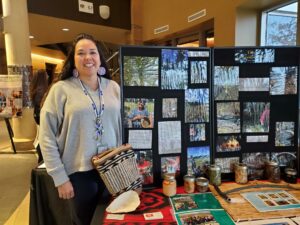 All this work links back to a reciprocal relationship with first foods, said Teara Farrow Ferman, Cultural Resources Protection program manager with the tribe.

“We have a creation story in which the animals lived on this earth before we did. That reciprocal relationship is that we are protecting and managing them so they return each year for us,” Farrow Ferman said.

Protecting those natural resources is difficult, she said, because the tribes has lost most of its traditional land. Now, the land isn’t enough to sustain the tribes, she said, so tribal members work with outside agencies and landowners to access first foods.

For example, there are no places on the reservation to harvest huckleberries.

“In our belief, once we find a food that we haven’t gathered in a particular area for a really long time, and we go back to that area, we gather it, and we say its name. It’s us keeping our promise to them that we haven’t forgotten them,” Farrow Ferman said, of first foods tribal members find.

Evidence has shown that when tribal members return to these locations, the first foods have returned as well, she said.

“They come back more plentiful each year because they know that we haven’t forgotten about them,” Farrow Ferman said.

For thousands of years, tribes have been the protectors of the lands and the animals, Sampson said.

“That is part of our religious and spiritual obligation that the Creator gave us. And so today we do that. This 40 years is just a very short period of time,” Sampson said. “If you look back over the last thousands and thousands of years, we had an abundance (of first foods). The way that we managed, the way we protected, the way that we gave reciprocity to the natural world, allowed us to live in a balance.” 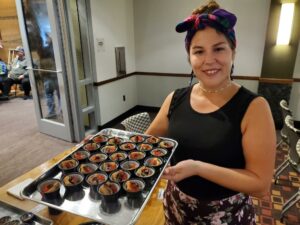 That abundance was on display at the anniversary event with a “Bougie Native” first foods feast. Several Native women made elevated first food appetizers featuring salmon, berries, elk, and eel.

The women used these traditional foods in ways surprising to tribal members. They said they also hoped to enhance the elements and showcase the foods to a new audience.

The biggest hit for the day was made of Pacific lamprey, also known as eel, said Sadie Mildenberger.

“We made an eel pate with smoked eel flakes on it. Our cousin, who was in charge of deciding how many eel we got, was very hesitant because he didn’t think that people would eat all of the eel. He didn’t want to waste it. So, we had to make sure that was a hit,” Mildenberger said.

The women served three different presentations of salmon along with what Mildenberger called a “churched up” version of elk and noodles. Right now, elderberries are in season.

“We used a lot of elderberries. So this is an elderberry baklava. That was so fun to make. We went out and gathered the elderberries, and then we had elderberry syrup donated to the meal,” Mildenberger said.

At the event, a variety of displays also highlighted information from all the Department of Natural Resources programs, including the plant nursery, the wildlife management group, fish hatcheries, and resource management.

However, the tribe still faces challenges as it continues its work, from a lack of recognition of treaty rights, to climate change, to pollution. Industrialization and development have led to scarcity and extinction of first foods in the Northwest and around the world, Sampson said.

“Over the past 40 years, we’ve advanced the concept of first foods and reciprocity with the natural world, with other indigenous people around the world so that other people can understand that. Of course, we got a lot more work to do,” Sampson said.